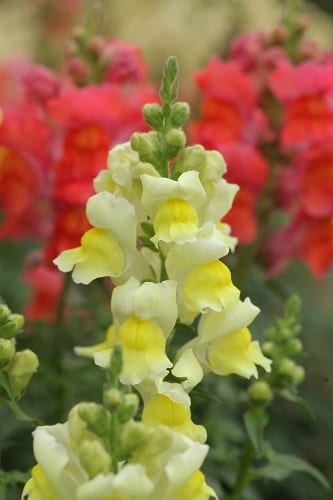 For gardeners wanting an easy growing winter annual it is worth re-stating all the good qualities of Antirrhinum majus, the Snapdragon. They may be a traditional favourite, but from another perspective they can also be the new fusion plant of the flower garden.The taller-growing varieties, ranging from 70 cm to 100 cm in height, provide excellent background height and colour in beds. Their mix of colours, mainly yellow, red, bronze, rose, pink and cream, blend beautifully with most other garden plants. Consider planting them as a background to spring flowering bulbs like Daffodils, Ranunculus, Anemone or Sparaxis or front them with a border of bold Pansy Evita’s or Pansy XXL. No one will be able to pass the bed without commenting on it.

The other good thing about the tall growing Snapdragon is its upright, formal growth habit. It does not take up space, its growth stays neat, and the dark green foliage topped by the multi coloured spikes of flowers, packs a huge amount of flower power in limited space. In formal gardens they will provide a uniform height of flower that can create a hedge effect, even more so if surrounded by a lower-growing dark coloured hedge. The final point in the Snapdragon’s favour is that its blooms make excellent cut flowers. They last well in the vase and the flowering spikes look dramatic on their own or when softened by foliage like Goldenrod (SOLIDAGO rugosa). The flowers are also edible, and can be tossed into a salad.

There are two more varieties of Snapdragon that deserve a mention here, the dwarf and the trailing varieties. The dwarf varieties, which include the ‘Tom Thumb’ varieties are low-growers, seldom reaching more than 25 cm high. They can be used as multi-coloured borders, around perennials or spring flowering bulbs. They can even be inter-planted with bulbs, so that when the bulbs die down, the Snapdragons are still going strong.
The final type of Snapdragon is the trailing variety, the best known of which is the vigorous- growing ‘Luminaire’, a branching, mounded plant covered with big beautiful flowers. It is more informal in appearance and will trail over raised beds, containers and hanging baskets Luminare is not available in seed form.

Snapdragons like sunshine but not intense heat, so they flower best in winter and early spring. Plant them in fertile, well-prepared soil, spacing dwarf varieties about 15 cm apart and the taller varieties about 30 cm apart. Most of the bedding plants available from garden centres will have been sown in March so you can expect flowers in June and July. Cut them down after flowering and they will send up new shoots for another flush. Seed can be sown directly into the beds or in seed trays all year round, although the best time is early autumn. Provide plenty of water during the dry season. During winter it is best to water on sunny mornings so that the foliage can dry off by evening, otherwise rust and mildew could develop. During the rainy season spray with fungicide to prevent rust.

Here are some varieties to look out for: