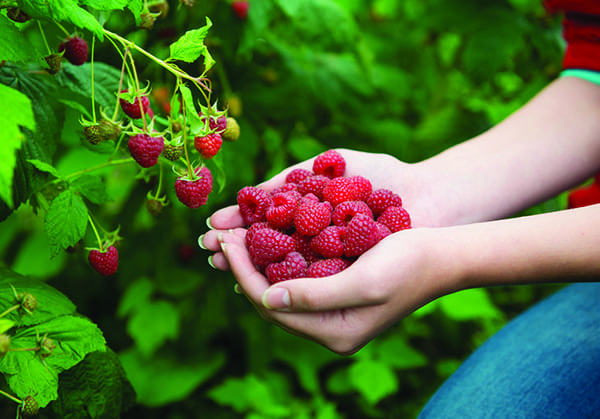 The term ‘brambles’ refers to blackberries or raspberries, which have edible fruit produced by many species in the Rubus genus within the Rosaceae family. There are two main sub-genera, called Ideobatus (raspberries) and Eubatus (blackberries). There are also many hybrids among these species within the Rubus sub-genus, such as tayberries, loganberries, boysenberries, black raspberries and yellow raspberries, just to name a few. What distinguishes the blackberry from its raspberry relatives is whether or not the torus (receptacle or stem) stays with the fruit when picked. When picking a blackberry fruit, the torus does stay with the fruit and is eaten or processed with the fruit. With a raspberry, the torus remains on the plant, leaving a hollow core in the raspberry fruit.

Raspberries come in four colours: red, black, yellow and purple. A few cultivars can tolerate winter temperatures of as low as -30°C, and most are hardy down to -10°C. Red and yellow raspberries belong to the same species and are the hardiest.

Blackberries can be either trailing or erect types. Both of these types can also be thorny or thornless types. Most trailing blackberry cultivars are cold hardy to -12°C, with some erect cultivars able to tolerate cold temperatures of as low as -25°C. Most blackberry varieties take three years to reach maturity and remain productive for up to 12 years. Due to disease and pest build up, it is recommended to replant every 10 years.

Blackberries and raspberries have similar soil requirements and can grow in a wide range of soil types, but do best in well-drained, fertile soil with a slightly acidic ph of between 5.6 and 7.0. Avoid planting in areas that drain poorly, as brambles, especially raspberries, are susceptible to root rot. A raised bed, about 25cm high, can work well as an alternative. A planting site higher than the surrounding area can also provide better air circulation and water drainage, which will reduce disease and insect problems. Avoid plantations where tomatoes, potatoes, peppers or eggplants were planted within the past five years as they could host diseases such as verticillium wilt. 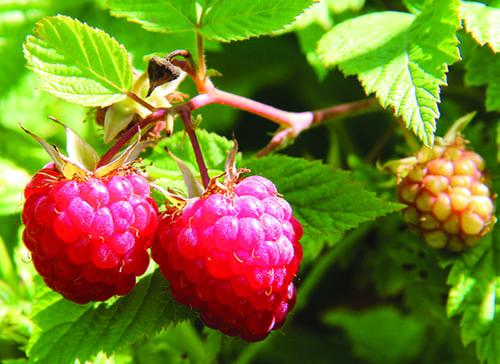 Raspberries require irrigation from bloom through harvest to ensure good berry quality. Avoid overwatering as raspberries are very susceptible to root rot caused by heavy wet soils. Overhead irrigation can be used but may encourage diseases. Direct application of water to the root system by means of drip or trickle systems is a better practice.  The amount of water needed per plant or plantation depends on the soil type, rainfall and climate conditions. Compared to other fruit crops, blackberries do not need much water. Care must be taken to keep the soil moist, but not overwatered, especially on lower soils. Younger, newly established plants require the most care to make sure that their roots do not dry out or get waterlogged. About 20 – 30mm of water is needed per week during the summer months, when the mature plant is growing and fruiting. This amount is dramatically lowered during the winter season when the plants are in their dormant phase.

Perennial plants have the ability to store nutrients from one season to the next. This results in the internal nutrient status of the plants sometimes being somewhat different than would be expected from one season’s soil test or fertiliser program. Because of this, virtually all authorities agree that large-scale producers should take annual leaf samples for nutrient analysis. Fertiliser programs can then be adjusted according to the results.

Here are some basic guidelines that can be followed:

The appropriate means of pruning and trellising bramble plants largely depends by the species and varieties grown. More detailed information is available from Berries for Africa.

Many pests and diseases affect brambles, although only a few are serious in South Africa. Proper site selection, soil preparation and plant selection are important steps in preventing problems. As a result of blackberries belonging to the same genus as raspberries, they share the same diseases including anthracnose, which can cause the berry to have uneven ripening and sap flow may also be slowed. They also share the same remedies, including the Bordeaux mixture, a combination of lime, water and copper sulphate. Prevalent diseases include root rot, cane blight, crown gall, leaf spot and mildew. You might encounter pests such as birds, spider mites, aphids, cane borers, fruit worms and beetles. 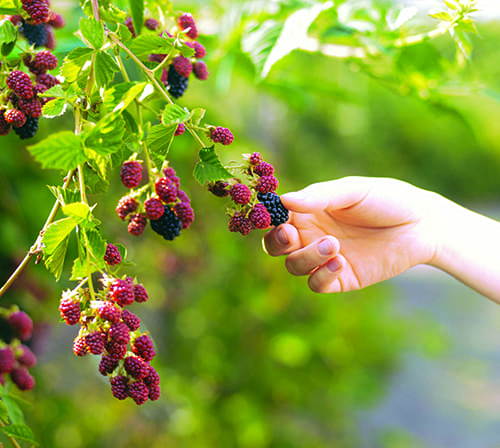 Brambles are delicate fruit that are mostly harvested by hand. To enhance fruit quality and shelf life, it is necessary to cool the fruit to between 2°C and 6°C as quickly as possible after harvesting. Heat extractors and cold rooms are therefore ideal to use in large operations. The berries can be stored in the refrigerator for a couple of days and have good freezing properties.

Raspberries are what is known as an aggregate fruit. Aggregate fruits have flowers with multiple ovaries, and each ovary produces drupelets around a core formed by the flower. The fruit contains more vitamin C than oranges, are super high in fibre, low in calories and supply you with a good dose of folic acid. Further to that, raspberries are high in potassium, vitamin A, calcium and are super tasty.