You are here: Home / Grow to Eat / Veggies / Brussel Sprouts

Get rid of those pouts, grow brussel sprouts!

A sprout from Brussels…?
BRASSICA oleracea variety gemmifera, the vegetable we know as Brussels sprouts, arose from the same parent plant as cabbage, kale, broccoli, kohlrabi and cauliflower and thus shares the same genus and species names as them. The ‘Brussels’ in the common name comes from the capital of Belgium – the plant probably first attained importance in that area, or may even have been developed there. The first rough description of it was in 1587, and by as late as the 17th century some famous botanists still referred to it only as something they had heard about but had never seen. 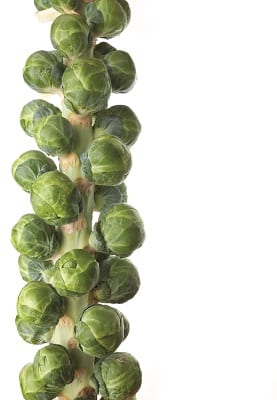 My advice to novice vegetable gardeners is usually to grow vegetables that you like to eat, and which are easy and uncomplicated to grow, but it is also interesting to
try the odd vegetable that isn’t universally popular. For many of us Brussels sprouts falls into this category because we have had a bad experience with overcooked, soggy and sometimes distinctly unpleasant tasting sprouts. According to commercial vegetable growers the reason for the bitter taste is that the vegetable was stressed at some stage (by drying out) or that the sprouts were picked past their prime. Brussels sprouts like cool moist growing conditions – more so even than cabbage and cauliflower – and if these requirements are met they have a distinctive nutty sweet taste, as long as they are not overcooked. This is an interesting looking vegetable because the ‘sprouts’ look like tiny little cabbages. The sprouts form in the axils of the leaves (the space between the base of the leaf and the stem above it) and are carried all the way up the stalk of the plant. The plants don’t take up that much space and, because they are something of a speciality vegetable, three to four plants are probably more than enough for a family; so why not try them?

Health bonus
Brussels sprouts contain vitamins A and C, as well as a lot of potassium and folate and, unlike most green vegetables, are relatively high in protein. The protein is incomplete (lacking the full spectrum of amino acids) but if the vegetable is eaten along with whole grains then one has a complete protein serving. Being a member of the cabbage family, it is part of a group of vegetables that help to protect the body from free radicals and which have a detoxifying effect on the body.

Soil requirements
Like other members of the cabbage family Brussels sprouts need rich, fertile soil. Work in lots of compost and if possible incorporate an organic slow release fertiliser like Vita-Grow™ (2:3:2) or Vita- Veg™ (6:3:4) as well. That’s because the sprouts have a long growing season and need to keep up their vigour. Because they like firm soil sprouts will do well in heavier soils.

Sowing seed
Sow seed in January or February, in all regions. It is best to sow seed in seed trays in a seedling or germinating mix. Keep the mix moist. The seed should germinate within six to 10 days of sowing. Use a diluted liquid feed (not the usual recommended strength) weekly to encourage a strong root system and don’t let the seedlings dry out in the seed tray because they don’t like to be stressed.

Transplanting
About four or five weeks after sowing the seedlings should be about 10 cm high, at which time they are ready for transplanting into a sunny bed, prepared as described above. Make sure you plant out the seedlings before they become root bound or stunted in the seedling trays. Space the plants 45 to 60 cm apart and if you are planting a row or two, make the rows about 60 cm apart.

Growing on
 Regular watering is important; don’t ever let the plants dry out as this causes the bitterness in the sprouts.
 To keep the plants growing strongly, fertilise one month after transplanting and again a month later, use LAN or 2:3:2 (Vita-Grow™ or Vita-Veg™ are organic alternatives) or a liquid manure fertiliser. Make sure you water in the fertiliser.
 You may need to heap up the soil around the stems to support them and keep them upright, especially in lighter soils.
 Remove any weeds by hand because they compete for the nutrition in the soil.
 Some gardeners believe that the sprouts develop better if the lower six to eight leaves are removed from the sides of the stalk as the sprouts develop. If you are in experimental mode try it on some of the plants and leave others and compare the size of the sprouts later.

Pests and diseases
If plants are growing vigorously and receiving enough food they should not be troubled by diseases. Watch out for aphids and caterpillars because this can seriously affect your crop. Use an organic insecticide if necessary.

Harvesting and storage
The sprouts are usually ready for harvesting about 90 days after transplanting out. The lower sprouts mature first and should be picked when they are firm, bright green and about 3 to 5 cm in diameter. To speed up their development the growing point of each plant can be removed about three weeks before harvest. The sprouts should be harvested before the lower leaves turn yellow and once the sprouts have been picked, remove the lower leaves. Don’t remove the upper leaves because they continue feeding the plant. The harvest usually extends over two months, especially if the plants have grown strongly during the season. Discard any sprouts that are yellowish or show signs of wilting or insect damage. Keep an eye out for caterpillars. Remove the plant completely when all the sprouts have been harvested. The fresher the sprouts the better they taste so, if possible, pick them just before you intend to cook and eat them. Fresh, unwashed sprouts can be stored in the refrigerator for a day or two; store them in plastic bags in the crisper section. If you have more sprouts than you can handle then blanch and freeze them. Bring the water to a fast boil and add the sprouts, counting the blanching time as soon as the water comes back to the boil. Blanch small heads for three minutes, medium heads for four minutes and large heads for five minutes. Thereafter, plunge the sprouts into icy water to cool them down, drain and store them in labelled and dated plastic bags or containers; ensure they are properly sealed. Sprouts can be kept frozen for up to a year. 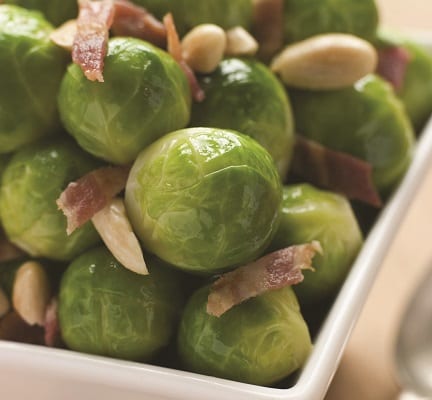 Less is more when it comes to cooking Brussels sprouts. They can be steamed, boiled or braised, and for not longer than seven to ten minutes. I prefer them steamed and served with a mustard and marjoram vinaigrette. If they are to be boiled then the water should be salty and the lid left off so that the sulphur fumes from the sprouts can escape and not affect the flavour. Apparently, by cutting an X into the bottom of the stems the problem of the leaves cooking faster than the cores is alleviated, so it is worth a try. Also, cook the same size sprouts together, or cut large sprouts in half. Traditionally Brussels sprouts are served with melted butter and a dash of freshly grated nutmeg, or with a white sauce. A delicious alternative is to serve them with a mustard butter, made in the following manner: melt two tablespoons of unsalted butter or margarine in a pot and whisk in two tablespoons of Dijon mustard, stirring until the mixture is smooth and creamy (about 30 seconds). Put the cooked sprouts in the pot, coat them with the mustard butter then season to taste and serve.