You are here: Home / TO BE DELETED / Butia capitata 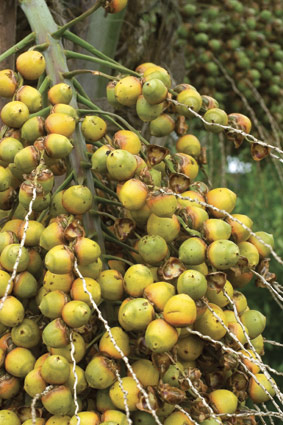 (Yatay or Jelly palm) is a stately, single-stemmed palm tree originating from Brazil, Uruguay and Argentina.

This palm is used extensively in local gardens largely due to its cold tolerance, which makes it one of the few palms able to be grown in the cool Highveld climate. It is also able to withstand humid and maritime conditions so it is capable of growing in most parts of South Africa. In South America it is cultivated for its fruit, which has a juicy, pulpy outer coating.
The sturdy stems can attain heights of up to 6m and the foliage can reach a diameter of 5m. The blue- to grey-green leaves reach lengths of over 2m and are made up of many slender leaflets. Given these proportions this is a rather large plant to fit into an average suburban garden but fortunately it is an outstanding container plant and restricts itself to much smaller proportions when grown in a large pot. The recurved leaves create a soft-textured impression in containers, despite the fact that they are actually tough and leathery. Apart from being enduring and hardy pot subjects these palms make dramatic lawn specimens. On large properties they can be planted along a driveway or path to create an avenue.

The inflorescence (flower panicle), being almost 2m long, is rather spectacular when it appears. It takes the form of a huge bunch of thousands of three-petalled, male and female, cream to yellow flowers. As they open, insects and bees are attracted to them and obviously effect pollination. The flowers are followed by bunches of yellow to red spherical fruit, 15 to 25mm in diameter. The fruit should be cut off the plant before it matures and drops because the smell of fermenting palm seeds can be somewhat overpowering (never mind the mess).

B. capitata will grow in full sun or light shade, in almost any soil conditions. If planted in the ground as opposed to a pot ensure that they have enough space to grow to mature proportions unimpeded.