You are here: Home / The Gardener / Die Tuinier / Practical Gardening / Pests and Diseases / Butterflies in your Garden 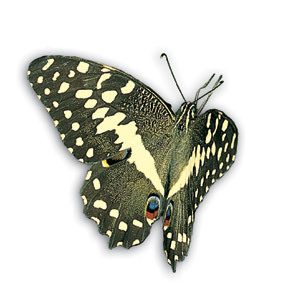 Gardening trends have changed a lot in the last 20 years. When I first came to South Africa, in 1980, most of the garden centres concentrated on exotic plants, and the showier indigenous flowers.

Garden design tended towards the formal flower bed, and we were encouraged to control pests – both plant and arthropod – with chemicals. ‘Worms’ on your plants were viewed as invading hordes, to be annihilated ruthlessly. As a lepidopterist – one who studies butterflies – I found this had two effects:

· Anyone wanting to rear butterflies in their garden had to become a good botanist and horticulturalist, by force!

· There was a dearth of naturally occurring, common species in any garden that was more than a few hundred metres from the veld. I often heard (and still hear) the complaint ‘we don’t see butterflies anymore’.

Then we moved to Johannesburg’s north, and discovered Witkoppen Wildflower Nursery. Here I must acknowledge Angela Hepplewhite and Bea Thompson’s contribution to my butterfly works. They allowed me to use their mature indigenous trees to rear many of the butterflies photographed in my field guide. Their essentially natural environment was home to many butterflies; some of these were forest species, even though Witkoppen is in the middle of the Highveld. It IS possible to grow a butterfly garden from scratch!

Nowadays, planting indigenous is all the rage and eco-friendly practices, such as complementary planting and minimal use of pesticides, are taking hold. Why, then, are garden butterflies still scarce and limited to a few migratory species?

Many gardeners set out to attract birds by planting indigenous, providing cover and avoiding pesticides. This helps to attract butterflies, too, but they need something extra. Of course the adults need nectar, but as this comes from flowers, this is a given in most gardens! More importantly, being insects, their larval stage (commonly known as caterpillars) needs indigenous food plants. Most species are very fussy about what they eat, and will starve rather than change. Fortunately, most butterflies are highly mobile and disperse to find new food sources. If more and more gardens contain the right plants, garden butterfly numbers will increase.

This of course means you have to abandon one of the gardener’s traditional weapons, the insecticide spray or, at least, restrict its use. A little understanding can help a lot. For example, the Citrus Swallowtail caterpillar looks really daunting and will make you fear for your lemon trees. But they seldom do serious damage. If you want to keep your lemon trees pristine, just plant indigenous Rutaceae. The female Citrus Swallowtail prefers to lay her eggs on these, her natural food plants, and it’s easy to transfer any caterpillars you find on your lemon tree to the Rutaceae. 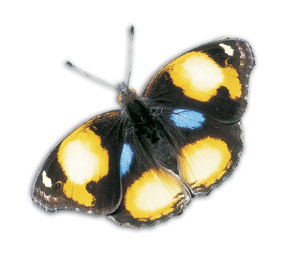 Food for adult butterflies is usually flower nectar, but some prefer rotting fruit. It’s not necessary to have 100% indigenous nectar, as many exotics are great butterfly attractants. Try to include plants with long flowering periods, and with blue to mauve, red or pink flowers. White flowers are also popular and certain yellow ones work well. Have a mix of low, bedding-type plants, shrubs and flowering trees. Clover and Lucerne are good nectar plants, as are Daisies, Impatiens, Marigolds, Alyssum, Phlox, Gazania, Heliotropium and Lobelia.

You won’t see butterflies all year round; they appear seasonally, usually hatching after rains when fresh foliage is available for caterpillars. In summer rainfall areas there are usually peaks in spring and late summer. The later emergence is normally stronger because the spring brood’s offspring has benefited from a whole summer’s plant growth. Winter rainfall areas have their best butterfly show in midsummer. Even arid areas like the Karoo can be good for butterflies; most species native to these areas are rare and localised but a good butterfly garden will pull in the widespread, travelling species. 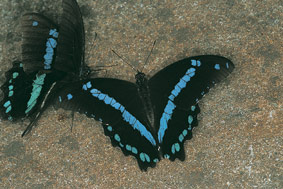 An adult Green-banded Swallowtail, Papilio nireus lyaeus, a forest butterfly that has invaded Johannesburg (which some say is Africa’s largest man-made forest). Its larvae will use Citrus but they prefer Rutaceae like White Ironwood (Vepris lanceolata), and Horsewood (Clausena anisata). 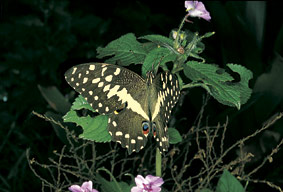 An adult Citrus Swallowtail, Papilio demodocus demodocus, on Impatiens – a good nectar plant. This is one butterfly found in almost all gardens because its caterpillars eat the leaves of orange and lemon trees! 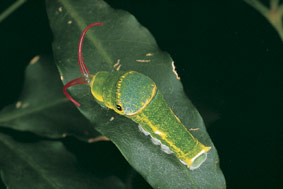 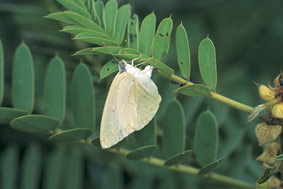 A female Catopsilia florella (African Migrant) laying her eggs on a Peanut Butter Cassia. Cassia (or, Senna, to give it its modern name) is a common African weed (Category 3) and the main food plant for this widespread butterfly. In summer, migrations may number in their billions, but they are only passing through. 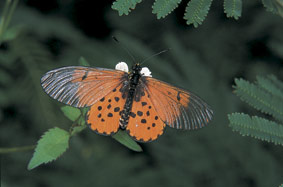 An adult male Garden Acraea, Acraea horta, the female is dull buff in colour. Plant the Wild Peach, Kiggelaria africana, and sooner or later you will notice hordes of this attractive red and black butterfly. Its colouring is a warning to predators that its body is stuffed with cyanide and tastes nasty! 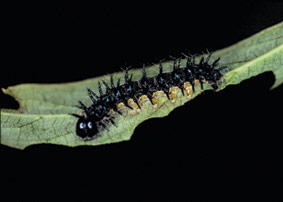 The Garden Acraea, Acraea horta, caterpillar. These spiny caterpillars are gregarious and may defoliate young trees. Don’t be tempted to spray; rather pick off excess egg batches and kill them by drowning. The larvae from one batch of eggs won’t harm a young tree. The other advantage of this butterfly is that the green Cuckoos, such as Diederik and Emerald, can withstand the cyanide the caterpillars contain and relish them, so having this butterfly around will attract the birds, too. 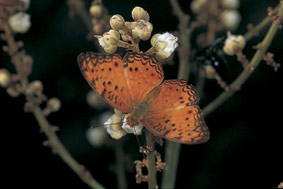 A Common Leopard, Phalanta phalantha aethiopica, on Deinbollia oblongifolia (Dune Soapberry). The Dune Soapberry is perhaps the best nectar plant on the East Coast, but it is seasonal. 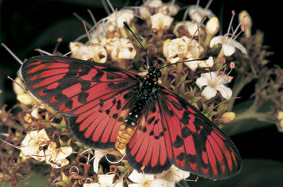 Male Blood-red Acraea, Acraea petraea, on Clerodendron glabrum (Cat’s Whiskers) – one of the greatest butterfly plants, equal in attractiveness to the invasive alien Lantana camara. Gardeners and municipalities removing Lantana would do well to replace it with Cat’s Whiskers. 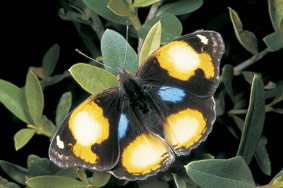 A Yellow Pansy, Junonia hierta. Yellow Pansies are widespread and turn up wherever they find suitable food plants. In the past they were never found in the Western Cape but since gardeners started planting the food plant Barleria they are now common.

If this article by Steve Woodhall has caught your attention then we know just the book for you:
Steve Woodhall’s ‘Field Guide to Butterflies of South Africa’, published by Struik.