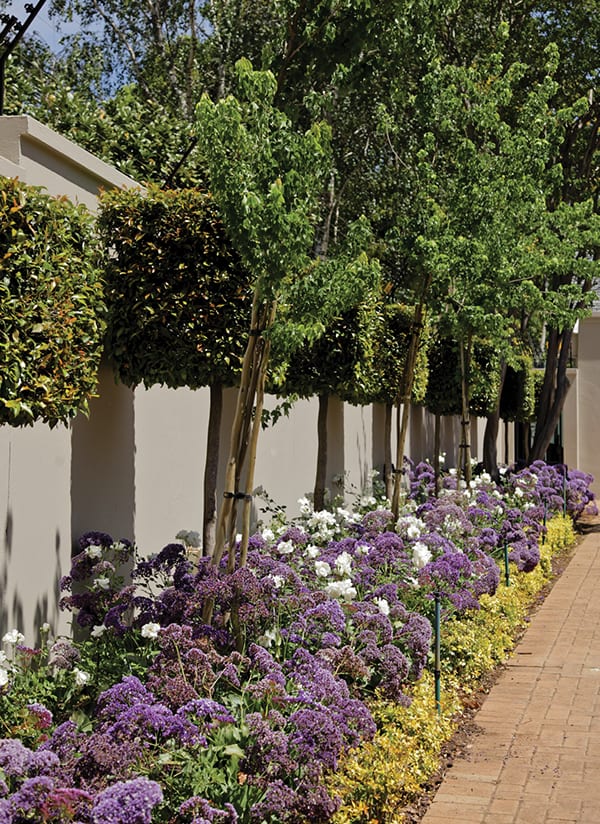 By May the rose season is almost at an end and you can look back with satisfaction (or score the garden a six out of 10, which means, ’Can do better!’). Healthy leaves are the powerhouse for the rose, and if leaves are stunted, diseased or drop off, the performance of the rose suffers. From interaction with rose gardeners I have become aware of three factors that affect the leaves.

Thrips has become a huge problem and virtually no rose garden is spared from this pest. Thrips deforms the leaves, making them smaller, chlorotic and distorted. It also affects the buds and blooms. The larvae are invisible during their first stage, nestling in the leaf nodes further down the plant, and migrate upwards during their second feeding stage to suck the sap out of the growing tips. The best cure is prevention, and the most effective action is to drench the soil around the roses with Koinor in August and again in December, as this systemic insecticide has a long-lasting action. Being systemic, it gets to the hidden larvae that garden sprays can’t always reach. The treatment is 2ml Koinor to 1L of water per rose bush. 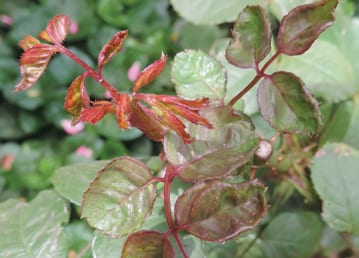 Another option is weekly spraying with Ludwig’s Insect Spray. The garlic in the spray will bring them out from amongst the petals, and the oil and pyrethroid will make it uncomfortable for them and kill them off. This product has a very low toxicity and can be safely used by organic gardeners. 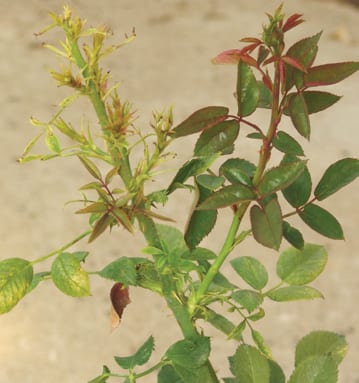 This problem is becoming more prevalent, especially in security complexes where maintenance staff have sprayed the nearby pavements with weed killer. The roses don’t show any initial damage until new growth sprouts, which may be red, or the leaves are very small, wispy and fern-like. Roses can be affected by the drift of spray from weed killer even if they are not close by, because the fumes drift and settle on nearby plants, especially on very hot days. The severity of deformed leaves depends on how much weed killer goes onto and into the stems.

Standard roses, especially, will not recover from weed killer spray. Bush roses are sometimes able to sprout from the portion beneath the soil level. Fortunately the soil is not contaminated, so I would advise pulling out the affected plants and replacing them with new roses.

When using weed killer, spray early in the morning so that the spray doesn’t evaporate (which causes the fumes to drift), and don’t spray if it is windy. Also, keep a dedicated spray pump for weed killer and don’t use it for the roses. It is almost impossible to eradicate the residue from the weed killer, no matter how many times the spray pump is rinsed out. 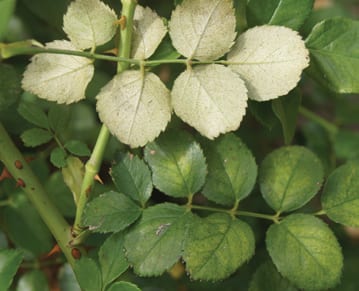 Red spider loves hot, dry conditions, especially if roses are in pots against a hot wall. We have had plenty of heat this past season and gardeners have reported rapid outbreaks. Leaves infected by spider mite look stippled, then turn yellow and dry out, finally dropping off the bush. Spraying twice a month with Ludwig’s Insect Spray will prevent light infestations, provided the bushes are regularly watered. For severe infestations, spray with a double dose of Ludwig’s Insect Spray (80ml in 5L of water) and make sure the under-side of the leaves are drenched. This must be repeated a week later since the sticky oil does not control the eggs that have been laid and from which the next generation will hatch.

Rose Tasks for May