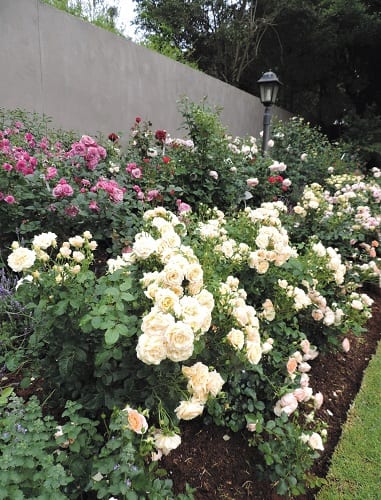 There are so many times when roses evoke a ‘wow’ from us! This bed, planted up with pale lemon ‘Forever Busy’ together with ‘Bridal Pink’ and ‘Amarula Profusion’ with purple ‘Vodacom’ at the back, is one such instance. These floribunda roses show off what floribundas are known for: a multiplicity of blooms that tumble downwards to create a magnificent border. The effect is enhanced by spot-on placing in terms of height. The lowest-growing rose, ‘Amarula Profusion’ (knee height), has been planted in front, with hip-height ‘Forever Busy’ and ‘Bridal Pink’ both in the middle, and ‘Vodacom’ at the back, growing to shoulder height. Other tall-growing pastel roses lead the eye along the bed, with some deep red added for liveliness. This garden, which was part of last year’s Joburg Rose Garden Bus Tour, was designed by Karen Gardelli.

Even though January is the middle of the rose year, the start of a calendar new year always feels like a fresh beginning, so there’s no reason why the rose garden shouldn’t benefit from our renewed energy! 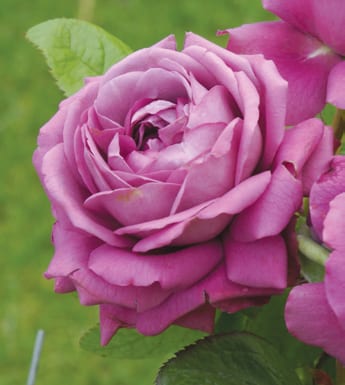 Cut back tall growers, especially if the roses have shot up and you feel that the flowers are too high for you to appreciate. If you look at how the rose grows you will see that the present flowering stem has developed from a previous stem, and if that stem has leaves it is safe to cut down to it, making sure that there are still leaves below the cut. Don’t undercut all the stems at once but do it in two or three stages a week apart.

Thin out dense bushes. If you see that some stems growing on the inside of the bush are spindly, it means they are not receiving enough light. If there are other good stems available, the spindly stems can be cut out. If some of the cut-back stems are two- or three-pronged forks, just keep one stem and cut the others off so that there is space for good quality new shoots to develop without competition. 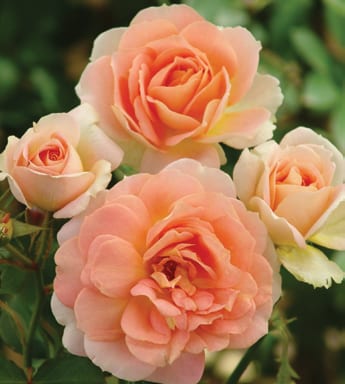 Cut with caution. Whatever cutting you do, don’t get carried away and cut away too much, resulting in the sun shining directly onto stems in the centre of the bush that were previously shaded. The result would be sunburn on the stems, causing dieback.

Help sad specimens that are losing their leaves and looking worse for wear. Resist the temptation to cut back hard and throw fertiliser at them. Instead, lightly trim the top growth and increase watering. If the loss of leaves has been caused by red spider the leaves will be a mottled yellow and you may even see small spider webs. If that’s the case, spray the remaining leaves (especially the undersides) with a double-strength dose of Ludwig’s Insect Spray, and repeat after five days. If the leaf loss is caused by black spot, spray with a cocktail of Chronos and Ludwig’s
Insect Spray. Lightly fertilise at half the recommended dosage and water in well.

Deepen the green, because light green leaves are a sign that all the nutrients applied at the beginning of the season have been used up. Apply Vigorosa by sprinkling 30g evenly around the base of rose bushes and 60g around bigger shrub and climbing roses. Within a week the leaves will take on a greener look, and they should sprout two weeks later. Only do this with roses that are covered with leaves.

Rose tasks for January
• Water deeply 2 – 3 times a week in the absence of good rainfall.
• Fertilise with Vigorosa towards the middle of January. Well-fed roses are more resistant to disease and pest damage.
• Renew mulch on the rose beds but keep a space open around the rose stems for water to penetrate.
• Spray once a week with organic Ludwig’s Insect Spray and once a month with Chronos to prevent black spot.
• Cut off dead blooms to keep the bushes looking neat and to encourage new stems to sprout.
• If water is short, use grey water (recycled from the shower or washing machine) but intersperse with municipal water once a week to dilute the effects of the grey water.