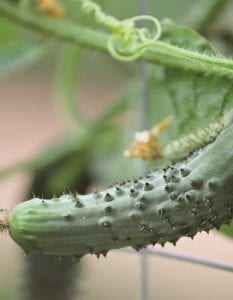 ● Cucumbers are a quick crop. Sow now and pick your first cucumber by end of Jan
● Plants can be trained up a trellis, which saves on space.
● It is a super salad veggie – crunchy, cool on the tongue and calorie free.
● Slices help to soothe tired, puffy eyes.
● Juice up a cucumber with celery to hydrate the body during hot, dry weather.

Grow cucumbers in full sun, in fertile, well-composted soil, or in a large container that receives shade for part of the day. Sow three seeds in one hole. No one really knows why, but this just seems to work. Seed should germinate within 7 days and the soil should be kept consistently moist during germination. Pinch off the growing points when the plants are 60 cm high to encourage side shoots, as most of the fruit develops from this growth. As the plant grows it can be pruned to keep it under control, but only once it has developed sufficient fruit (about 12 fruit per plant). Water well during hot and dry periods – cucumbers are not drought tolerant. Flood watering (or using sunken pots) keeps the leaves dry and less susceptible to mildew. Feed with a balanced fertiliser, like 2:3:2, or a liquid fertiliser 2-3 times during the growing season. Fertilise if you see yellow leaves – the plants will recover quickly after feeding. Boost the plant with a liquid feed given when the first flowers appear. Control fungal disease like powdery mildew during dry spells or downy mildew during humid and cool conditions with a broad-spectrum fungicide. Bicarbonate of soda is a home remedy for mildew, but use a mild mixture or it will burn the plants.

This is a most obedient vegetable, with tendrils that easily attach themselves to a support. The benefit of growing cucumbers vertically is that they tend to be healthier, produce evenly coloured fruit and yield better.

Be vigilant with the watering of pot-grown cucumbers because they don’t like to dry out. Feed weekly with a liquid fertiliser and make a frame to support the plant. Cucumber ‘Patio Snacker’ is a dwarf cucumber with a less-extensive vine that is suitable for growing in large containers and can be trained up a small trellis.

On the Living Seeds website (www.livingseeds.co.za) you’ll  nd the round, yellow ‘Lemon Cucumber’ and ‘Crystal Apple’, also with a hint of lemon, as well as  ‘Russian Giant Yellow’. There are also quite a number of pickling cucumbers. The pink-hued ‘Poona Kheera’ is described as a superb cucumber, has edible skin, is resistant to mildew and is an early producer. 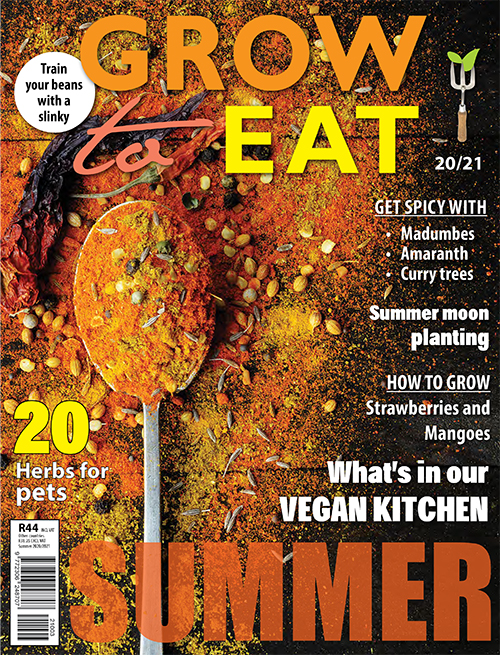 10 Easy Steps to Start Your Own Vegetable Garden