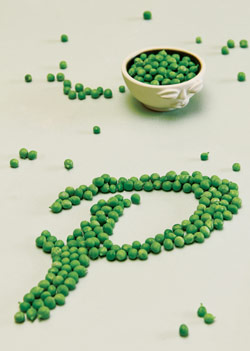 August is the time to get out those seed packets and hone your sowing, spacing and thinning out skills.

Since March we have been putting the building blocks in place for a successful food garden. The planning and preparation is done, and now it is time to start sowing. In warm frost-free areas seed can be sown directly into the soil, however, in many areas it is not advisable to sow in situ until after the last frost. Instead of losing valuable growing time, one can sow the first batch of seed into pots or seedling trays and keep them in a warm, sheltered place. By the time the temperatures have risen and the soil has warmed up, the seedlings will be ready to plant out.

Starting in pots or trays
Our food garden expert, Di-Di Hoffman, starts his vegetables in 10 cm pots, rather than seedling trays, because the greater depth of soil they hold makes growing and transplanting easier. Using this method, sow three seeds per pot for small to medium seeds, and for larger seeds, such as beans, one seed per pot.

Use a good quality potting soil or a mix of equal parts of sifted garden soil and fine compost. The soil texture should be fine so that there is good contact between the seed and the sowing medium. If it is too coarse then air pockets form around the seed and if they trap water then the seeds can rot. Only plant into moist soil and keep the soil moist, but not wet, during the time the seeds take to germinate.
Di-Di finds that sowing in pots can advance planting times by up to three weeks, and if the transplanting is carried out very carefully it can reduce transplant shock. Other advantages of sowing in pots are that there is less temptation to sow too much at one time, and it also allows one to manipulate succession planting.

Sowing in situ
Once the soil is warm enough, most vegetables germinate easily and sowing directly into the soil is the easiest way to get things going.
Spacing
Spacing – the distance you leave between each plant – is a critical factor in a small vegetable garden, but it is also dependant on soil quality and the time of year. In poor soil, space further apart so that the demand on nutrients is not too concentrated. Well-spaced plants are more drought resistant because there is more space for the roots to look for water. Plants can be closer together at the beginning of the season, but space them further apart in summer when growth becomes more vigorous.Spacing further apart also allows for better air circulation between vegetables, which helps to prevent fungus infections, especially in wet, humid weather. Follow the spacing guidelines on the seed packets until you have gained enough experience to adjust them according to your own observations.
Depth
Sowing at the correct depth (as indicated on the seed packets) is important. Be sure to follow this depth consistently otherwise the seeds in the batch will germinate sporadically. Seed sown deeper than necessary can take a week longer to germinate, while seed that is too shallow may not germinate at all.
Ways to sow
Scatter sowing: When using this method make sure the bed is totally level. If not, when it rains the seed could all be washed to the lowest point.
Rows: When sowing in rows distribute the seed evenly along the row; this is easier if you use a planting stick with markings at 5 cm intervals. Put the stick alongside the row and sow in little dribbles, then fill the row with sieved compost. This aids germination because it is easier for the germinated growth to push through, especially in clay type soil. It also provides nutrients to the seedlings.
Individual holes: Use this method for larger seeds – Di-Di advises using a cone shaped dibbler or sharp pointed tool to make the hole. (Using a blunt tool compacts the soil.) After dropping in the seed, fill the hole with sieved compost.
Watering
When sowing in August, water the bed two to three days before sowing so that the soil is just damp. Later in the season the bed can be watered a day before sowing. Don’t sow in soil that is either dry or soggy. The soil should never be allowed to dry out during germination, although in August and September there is usually not much danger of this happening. During very hot months shade cloth can be used to cover the beds. This also saves water. Generally seed beds are watered once a day, and not too deeply because most seed is not much deeper than 5 cm. If possible fit the watering can with a very fine rose. As one tilts the watering can to start and stop watering the water tends to come out in spurts or big drops that can wash the seed away. To avoid this start watering away from the seed bed then bring the spray over the bed; finish by watering away from the bed again.
Thinning out
Once the seedlings are up, give them a boost of vitamins and minerals by drenching with a low concentration of liquid fertiliser, preferably an organic kelp-type fertiliser. Start thinning out once the seedlings have grown a few centimetres tall. This step is critical because plants growing in a clump compete for water, nutrition, light and growing space. Snip off the plants at ground level; it is less disruptive than pulling them out. Thinning can be carried out in stages until the final spacing is achieved. Use the plants you remove in salads and stir-fries.
Seed viability
Vegetable seed is generally viable for two to three years if stored correctly. If you don’t use all the seed once you have opened a packet, fold over the top, secure it with a clothes peg and store it in a sealed container in a cool place. On some seed packets, especially those containing hybrid seed, you may see a cautionary note to the effect that the contents are ‘treated seeds, not for human consumption’. This means the seeds have been treated with a fungicide to prolong the period during which they will be viable.
To learn more about growing vegetables read our growing vegetables article.

Article by Alice Spenser-Higgs with information by MayFord Seeds and Di-Di Hoffman of Bouquet Garni Nursery.