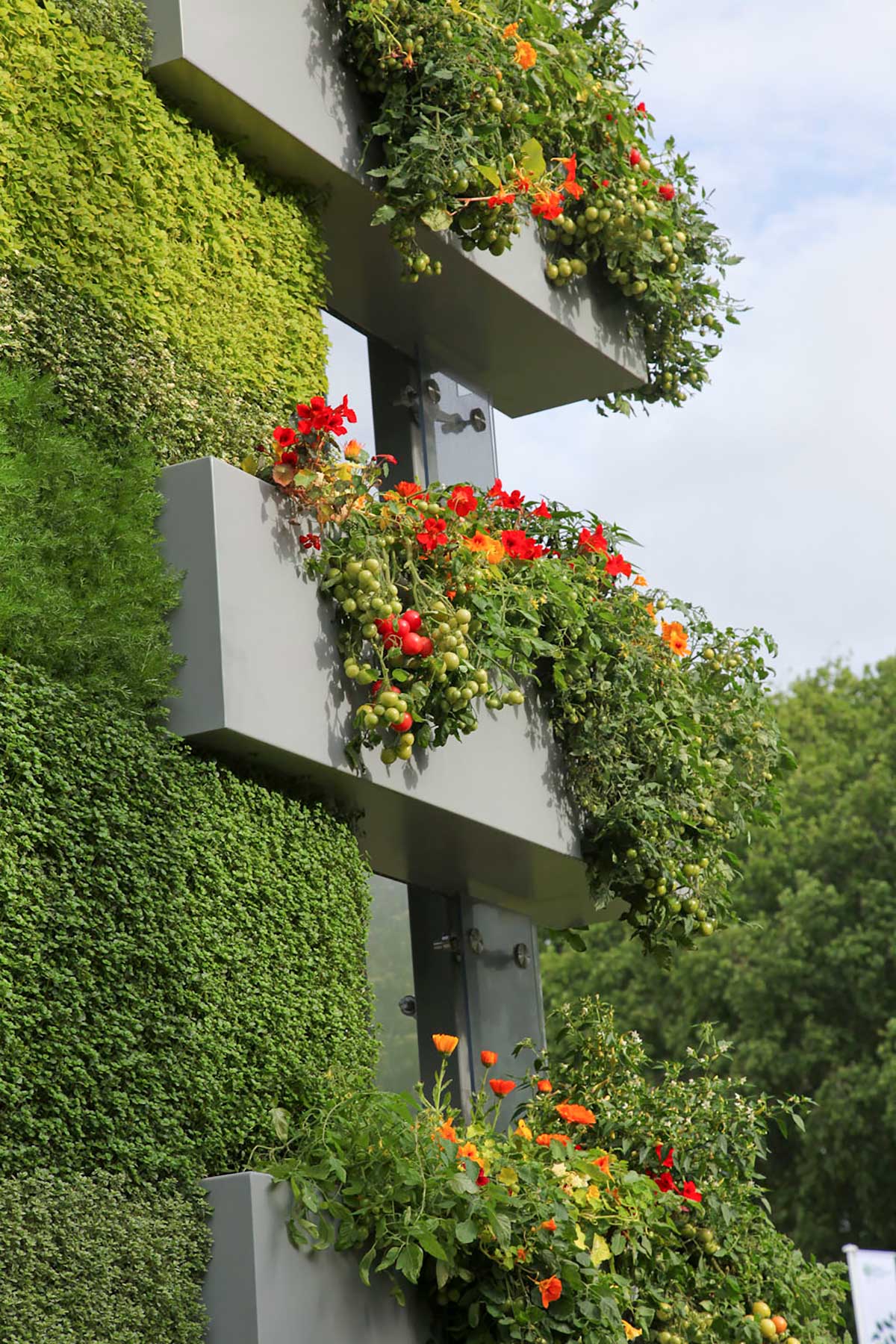 Saving space is not the only reason for vertical vegetable gardening. Veggies twining up obelisks, tumbling over archways, vining up a tepee or acting as a green screen beautify a veggie garden while also making it more productive. Veggies grown upwards are generally healthier, and less susceptible to fungal disease because the leaves dry off quickly after watering and there is better air circulation.

Vertical vegetable gardening is an effective alternative way to grow pumpkins, squashes, watermelons and other melons that take up so much ground space. A tepee hideaway, planted with peas or runner beans and flowers, is a sure way to entice kids into the garden, and maybe even get them gardening. Re-purpose all that stuff you were going to throw away. Mount old gutters on a wall for growing strawberries and salad veggies. Use drainpipes as a support for berries, beans or granadillas, or make a hanging garden with small pots or dark-coloured plastic cool drink bottles (plant roots don’t like being exposed to light), cut in half and attached to a frame.

5 ways to make it easy for yourself

Vining vegetables and fruit do the clinging and climbing themselves. You may have to get them started, but that’s all. The best veggies are climbing peas, runner beans and cucumbers. Install the trellis, obelisks or other supports before planting. This makes it easier to make changes, and the vegetables won’t get damaged. Make sure the structures are strong enough and big enough to support the vegetables you are planning to grow. Squashes and melons get very heavy, while tomatoes also need sturdy support. Peas and beans scramble lightly up almost anything. Anchor the structures securely, either by stakes in the ground or attached to a wall. When using a trellis on a wall, make sure there is space between the trellis and the wall to allow the plants to climb and for air to circulate. Place the structures on the south or west side of the garden where they won’t block the morning sun.

How to grow upwardly mobile veggies

Peas (winter) and beans (summer) might be easy growers, but they still need well-prepared, compost-enriched soil that drains well. Work lime into the soil 3 – 4 weeks before planting. Water regularly and don’t let the soil dry out. The more you pick the better they produce.

Butternut, squashes, melons and pumpkins can grow up to 40m long. Start them on a sturdy trellis, even if they then scramble along a wall or up a tree. Don’t let them grow out of reach or harvesting becomes difficult. A pergola is ideal because the plant can be trained up the pillars and then allowed to scramble over the pergola like a creeper.

Cucumbers are not as vigorous and can be grown up an obelisk or on a trellis. The plants twine on their own with just a little help in the beginning. Cucumbers grown vertically can be pruned by taking out the sucker that forms between the main stem and the leaf. This can be done until the growth reaches the top of the trellis and then it can be allowed to bush out. This opens up the lower growth and fruits to the sunshine, improving productivity.

Both vining and determinate tomatoes can be grown vertically but must be tied onto supports. There are many ways to support them: in a cage, on a trellis, on a framework or with stakes. Cherry tomatoes can even be grown in large hanging baskets. Tomatoes are gross feeders and should be planted in fertile, well-composted soil, and watered regularly rather than intermittently. Growing tomatoes upwards helps to keep water off the leaves, which also dry out faster, preventing fungal diseases.

Shallow-rooted vegetables, like lettuce, Swiss chard and spring onions, as well as herbs like chives, coriander, parsley, wild rocket, thyme and sage, can be grown in vertical planters fixed to the wall, or even gutters. The pockets need to accommodate at least 15cm-deep soil, and it is a good idea to incorporate a slow-release fertiliser and water-retaining gel or palm peat. Water daily.