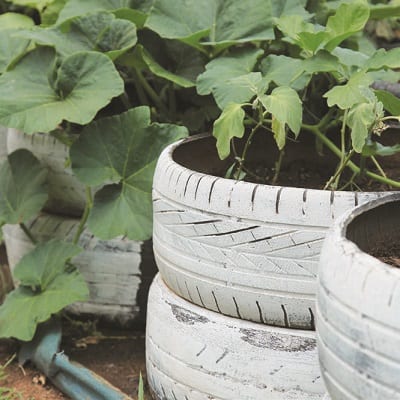 It’s time to get inventive as we find ways to garden in our water-challenged country. A smart, water-wise greenhouse in your backyard may be the answer, and it’s easy to build one yourself!

Water-wise gardening has become something of a household term, and never more so than now, off the back of the worst drought experienced in most provinces since records began in 1904. And there’s a warning that the summer of 2016/17 will also be bad, which is scary stuff!

Tried-and-tested ways to save on irrigation The sad fact is most veggies are water guzzlers. So we need to look first and foremost at conserving water to reduce the volume we use, simply by watering wisely. There are many ways of doing this. Direct watering is one, where we take care to water only where we need, when we need. A simple, low-cost example of this is trickle irrigation, where a submerged cool-drink bottle with drainage holes is used to percolate water down exactly to where the roots need it. That’s smart! A more obvious way is to water at times when evaporation is lower, such as early mornings and late afternoons, or when it is not windy. A third is to water only when necessary, watering more deeply, but less often. When we design our food gardens, we should also take note of shadow patterns, bearing in mind that South African summers are boiling hot. Apart from causing sunburn on fruiting crops, afternoon sun dries out soil fast. Why not plant a row of fruit trees on the north-western side, so they can cast filtered light on some of your veggies during the afternoons? They could also form a useful barrier against drying winds. And last, we should all be mulching with compost to retain moisture.

Build a water-wise ‘hanging garden’ in your backyard!

There are other, more inventive things we can do to become truly water-wise food gardeners. One idea I came across recently, and which I just love, is to build a ‘hanging garden’. Thabo Olivier, who gardens in the drought-prone climate of Bloemfontein, showed me a simple structure he has built in his backyard that isanother example of finding a smart, low-cost solution to our need to grow veggies with minimal water. He’s built an A-frame greenhouse out of reclaimed gum poles, and then covered it with steel mesh (inside) for squashes to climb up on, with shadecloth stretched on the outside to prevent summer sunburn and reduce water evaporation. The A-frame structure needs to be high enough for you to stand up inside it comfortably, so at least 2m high. It can be as big as you want, but can work even in a small space (floor dimensions of 3m x 4m would work very well). Inside, Thabo has created a three-tier planting system that increases the space he has to grow veggies in, and – crucially – also allows directed irrigation, which trickles down from one level to the next, hence reducing water wastage to virtually nil. Here’s how he did it:

Step 2
Fill the bucket with a rich growing medium to the ¼ mark, below the holes. Then carefully take seedlings and thread their leaves through the growing holes, so the roots are left inside.

Step 3
Take a piece of hessian, cut a slit in it, and then cover the inside of the hole with the seeding stalk in the slit. Fill the bucket with soil to the ¾ mark.

Step 4
Fold a 30cm x 15cm sheet of chicken wire into a harness, pinching the sides together. Then insert an old cool-drink bottle cut in half. Fill it with growing medium and plant up. 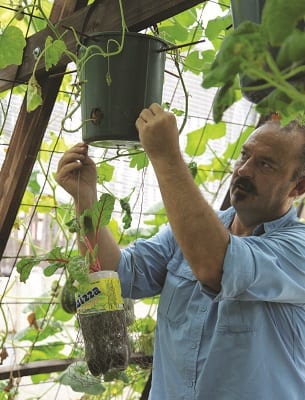 Step 5
Hang the bucket from one of the cross-beams of the A-frame greenhouse, and then make a wire handle for the cool drink bottle harness, and hang it directly beneath the bucket. 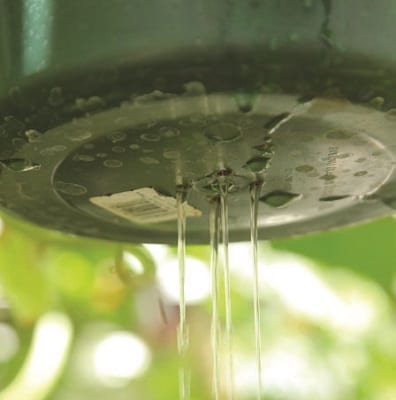 Step 6
Now place an old tire on the ground, directly beneath the suspended containers above,  ll it with rich growing medium and plant up. To irrigate, pour water into the bucket above, let it trickle into the cool-drink bottle below, and then down into the tire garden on the ground. This hanging garden reduces water wastage to virtually nil, while the A-frame greenhouse keeps the environment humid and safe from sunburn. What a winner!