Get the smoky flavour without actually smoking anything.

Liquid smoke is just what it sounds like – smoke that’s been turned into a liquid. It can be used to flavour all types of foods, from meat, marinades, soups and stews to cheese and vegetables. Smoking food was first used as a preserving agent along with salting, pickling and sugaring, a necessity to kill off bacteria and make food last longer. However, the smokiness became a flavour that people wanted, which is why more and more food is smoked today. Liquid smoke has recently become more popular, but hasn’t been available in South Africa until now. You can now buy concentrated liquid smoke in various hardwood flavours locally from www.liquid-smoke.co.za. The concentrated liquid is made by smouldering damp wood chips in a large oven, and condensing and rapidly chilling the smoke, which mixes with water to form a liquid. This mixture is then filtered to eliminate impurities including any carcinogenic gases and solids, to leave a perfectly safe, easy-to-use product. The trick is to use liquid smoke sparingly, or it could result in a bitter flavour rather than the subtle smokiness that elevates food to another level. 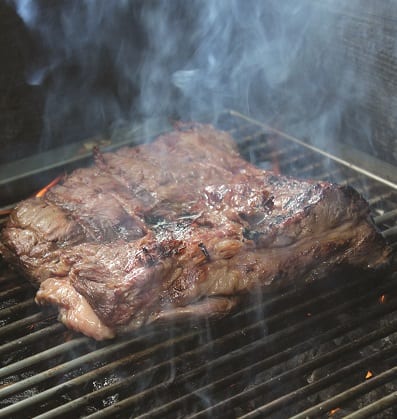 For all types of meat

Mix all the ingredients together and pour over the meat. Leave overnight for the best results, or a minimum of 2 hours. Baste the meat with the marinade as you braai it. 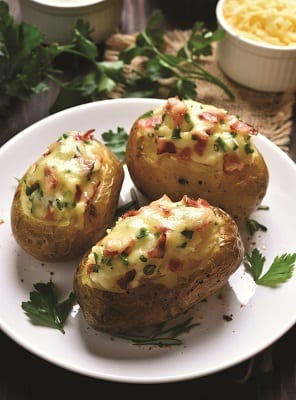 Bake the potatoes by either wrapping them in foil and placing them in the coals of the fire, or baking them in the oven at 180°C for 45 minutes to an hour, until they are soft. Scoop out the flesh, leaving the shells intact, and mix with all the other ingredients. Spoon back into the shells and heat up under a grill or on the fire before serving. Serves 4.