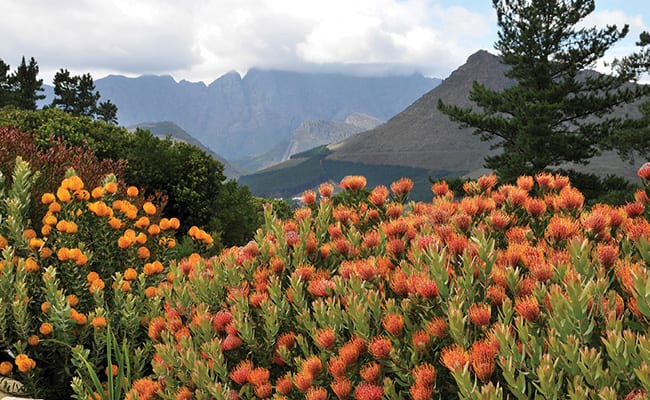 Long-lasting flower heads in yellows, oranges and reds consist of a large number of small flowers with stiff protruding styles – fascinating and almost unnatural to the touch.

Hybrids and cultivars of our indigenous pincushions are grown the world over for the cut-flower trade, and are probably one of the most distinctive and recognised flowers on the planet. In South Africa, where they hail from, you will find pincushions in flower from July to November. Species like Leucospermum cordifolium, L. tottum, L. reflexum, L. lineare and L. glabrum have been widely crossed with each other and a wide range of modern hybrids and cultivars grown from healthy cuttings are available for the home gardener to plant.

Because pincushions are part of the Cape fynbos floral kingdom there might be a perception that they are temperamental and difficult to grow in other provinces. This is not true, because they fare very well elsewhere, including in other rainfall climates, and once established can even tolerate a little frost. The secret lies in how they are planted and cared for. 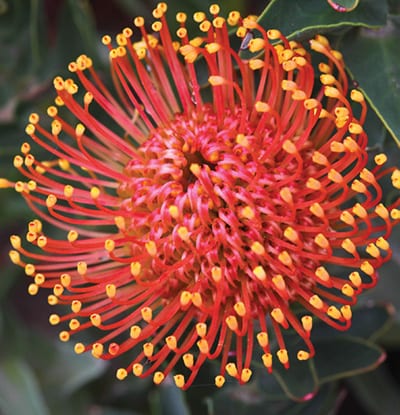 In their natural habitat these members of the Proteaceae family will grow in sandy, nutrient-poor, soil with a low pH between 5 and 6. They have a general preference for dry, hot summers and cold, wet winters. But don’t allow this to put you off as they can be grown quite successfully as long as you make a few tweaks:

Full sun (at least six hours of sunlight) is needed for good flower production. Even light shade will cause leggy growth and no flowers.

Although some varieties can tolerate clay soil, it is best to pay special attention to good drainage.

The area around the plants should be free of weeds, but never dig or hoe them out. Remove any weeds by hand, trying your best not to disturb the soil. If you are scared of uprooting the plant while weeding, rather cut the weeds off at ground level. 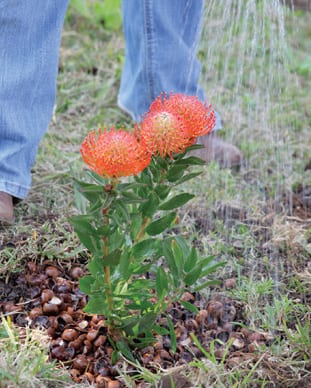 Pincushions are quite drought tolerant, but only once well established after two years. Water immediately after planting and regularly thereafter to keep the soil damp. In most loamy garden soils watering two or three times a week in hot weather should be enough. Young plants growing in sandy soil or in pots will need water every day.

Drip irrigation with water at soil level is much better than irrigating overhead – wet leaves is just an invitation for disease.

Pincushions and other fynbos plants are adept at growing in poor soil with root systems which will find the nutrients they need without any help. The plants are very sensitive to fertilisers with a high phosphate or nitrogen content.

Fynbos growers recommend that young plants can be fed with organic fertilisers derived from fish emulsion or seaweed at half the normal strength to help them along.

A pincushion can become a fairly large shrub (1.5m high and 2m wide, depending on the species or hybrid) and produces many spreading side branches which carry the inflorescences at their tips.

To enjoy a healthy and neat plant for a long time, you will have to do some basic pruning: 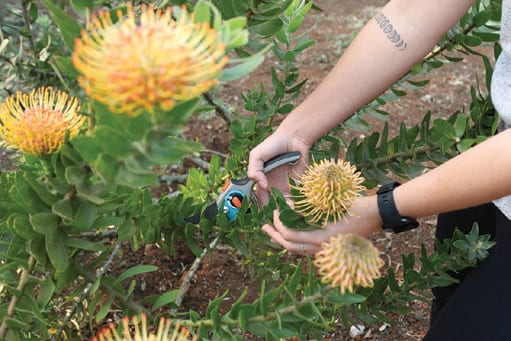 Frost advice: Well-established plants can tolerate light frost, although the flowers might get damaged. Rather cover them with frost cloth. In cold climates it is always a better idea to plant your pincushions in spring to give them a change to get established over summer.

The following can cause pincushions to flower poorly:

Can pincushions be planted in pots?

There is no reason why you can’t enjoy these beautiful flowers just because you don’t have a garden! Use a specialised fynbos potting soil or bark-and-sand-based commercial potting soil. Also, choose large and roomy containers that will be in full sun for most of the day. Water potted pincushions every day, mulch them with pine bark and feed regularly with a water-soluble product like Seagro at half strength.