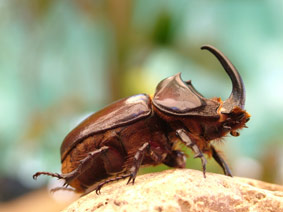 The rhinoceros beetle, so-named due to its large recurving horn, is a well-known sight in gardens and on farms in Africa.

Beetles are insects that belong to the order ‘Coleoptera’. Insects belonging to this order have front wings that are hard and are used as a protective cover both for their second pair of wings and their soft abdomens. Rhino beetles are strong flyers but many other beetles have lost the ability to fly and the front wings are joined together and form a hard protective cover.

Worldwide, the name ‘rhino beetle’ or ‘rhinoceros beetle’ is used for many different species of beetle. South Africans will be most familiar with the large, shiny, rhino beetle males that possess an impressive horn. The males use these horns to fight each other for territory and for possession of females.

All beetles pass through four stages: from eggs, to larvae, to pupae to adult beetles. Rhino beetle females lay their eggs in manure (particularly horse manure) or compost, both of which provide nourishment and shelter to the large, c-shaped white larvae as they grow to maturity.

The mouthparts of adult rhino beetles are adapted for chewing and biting. They are often found burrowing into the growing crowns of palms to feed on the young leaves. They are nocturnal and often attracted to lights, such as porch and streetlights.

Rhino beetles are now found throughout South Africa, including the Western Cape, an area where they did not occur previously. The practice of moving untreated soil and compost into the province may have introduced the beetle there, although it could also have found its way there in the soil of plants that are grown in KwaZulu-Natal or Mpumalanga and supplied to nurseries in the region.