Home » The Gardener » How to make compost heap 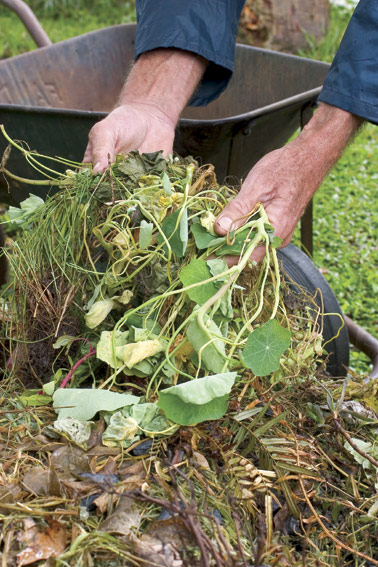 How to make compost heap

Scientifically, composting is defined as the biological decomposition of organic wastes under controlled conditions. Good compost is made by following simple rules. One needs materials, assembled in the correct proportion; aeration; water (being careful not to over water); and heat or earthworms.

Containers
A compost heap can be made within a variety of containers, from a constructed a wooden box to a chicken wire bin. Containers keep the compost neater, but a heap placed directly on the soil is just as good. A box constructed of timber should have air holes between the timber slats to ensure aeration and should not be a higher than 1.5 metres.

Two boxes are ideal – as one matures the other is filled. Place bricks or clay pipes in the bottom of the box, about 10cm apart and covered with woody plant stems or small twigs, to help with air circulation. Place the boxes on soil and not concrete, as the soil base helps with aeration and drainage.

Assembling the Materials
A good guide for assembling materials in the correct proportions is to think of them as ‘greens’ and ‘browns’. ‘Greens’ refers to fresh green matter such as grass clippings, vegetable waste and fresh leaves, which are nitrogen rich, and browns refers to materials such as fallen leaves, straw, sawdust and shredded newspaper, all of which contain high proportions of carbon. The greens would be the ‘wets’ and the browns would be the ‘dries’.

Up to 10% of the material can be rough material like small sticks and prunings that will probably not break down completely but will help with aeration and prevent material from packing down and clogging up.
Start by mixing the greens together, chopping up anything that is too big to mix easily. To get the correct proportion of carbon and nitrogen spread out two buckets of browns and top with one bucket of greens. This is best done outside a container. Repeat the process and then add some ‘sprinklings’.

Sprinklings come in many forms, from ground limestone or wood ash to bone meal. Alternatively one can use commercially available organic compost activator and then add a few handfuls of soil. Thereafter add water – one to two litres with a fine mist spray or watering can – taking care not to over water. Repeat this process until all the material is used and then mix the layers together, using a fork, until the material is evenly distributed. Place in the container and turn every four to six weeks.

Moisture
It is a common mistake to use too much water. Remember that ‘greens’ may not look wet but can contain up to 95% water. The overall moisture content of the compost heap should be 60 to 65% – as moist as a wrung-out sponge. Not enough moisture is better than too much, it simply means the compost will take longer to mature. Compost can be made in six to eight weeks, or it can take a year or more. In general, the more effort you put into preparing and assembling the compost heap, the quicker the compost will develop. When the material has turned a dark brown colour and has an earthy smell the composting process is complete. It is then best left for a month or two to mature.