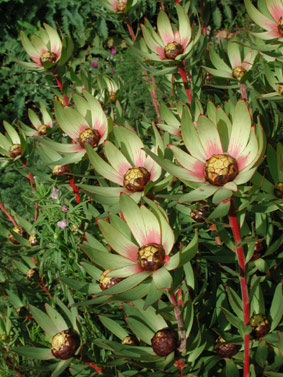 The plants in the genus Leucadendron make it one of the most conspicuous members of the Proteaceae family and most of the approximately 85 species are endemic to fynbos of the Western and South Western Cape.

They generally occur in acid soils in large colonies, often transforming entire mountain slopes into vivid swathes of bright yellow and red. They are unusual amongst most members of the Proteaceae in that they are dioecious, meaning that male and female flowers are borne on separate plants. Involucral leaves that become brightly coloured at flowering time enclose the flower heads.

The male and female flower heads of the same species often look very different – the male flowers are borne in a feathery rounded cluster whereas the female flowers are usually produced from a hard cone. The Leucadendron flowering plants remain showy for several months and certain species emit unusual scents, attracting many beneficial insects to the garden.

Leucadendrons make excellent subjects for mixed fynbos gardens, informal hedges or even as specimen shrubs and trees, and they provide useful cut flowers. They are remarkably water-wise plants once they are established.
Article by Graham Duncan