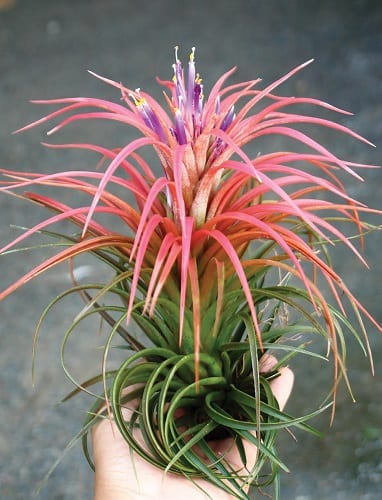 In the October issue we discussed the Tillandsia genus – what it consists of, where the plants are from and how they grow, dispelling a few misconceptions in the process. In this article we get more specific, introducing particular species and hybrids that are brilliant for the home gardener.

The well-known Spanish moss (Tillandsia Usneoides), often called Old Man’s Beard, is probably the species of air plant most gardeners are familiar with, and the one most often seen. It is a fast grower, eventually forming long strings or bunches that are a collection of hundreds or even thousands of little plants.

The tiny flowers are not easy to see and are often overlooked, but if you look closely you may sometimes be able to see the green flowers between the grey plants. There are different forms of this species, from those with really fine leaves to a much coarser form with slightly larger plants. Most air plants tend to flower on a regular basis, with the exception of Tillandsia Latifolia and Tillandsia Purpurea.

These species grow prolifically but very seldom flower outside their natural habitat, which is the Peruvian desert where they get almost no rain. The only moisture available for them to survive on comes from the condensation of mist on the plants, and they need conditions similar to these in order to flower. Some of the species commonly available to the South African gardener, and which are all worth growing, include the following:

Tillandsia Funckiana has a very interesting growth habit with wild, needle-like leaves, and the leaves around the tip of the growth part slightly to let out a really spectacular red flower.

Tillandsia Juncea starts off looking like a little grey clump of grass, eventually forming huge clumps with multiple heads/growths and producing a cone-shaped inflorescence on a tall stem that emerges from the centre of the growth.

The interesting Tillandsia Tricolor has three colours in its inflorescence, as the name suggests. It is easy to grow and very rewarding. There is a group of Tillandsia species that have a very interesting bulbous growth habit with swollen leaf bases and narrow, rounded and sometimes twisted leaf tips, very much resembling an octopus or jellyfish. Species such as Tillandsia Bulbosa, Tillandsia Butzii and Tillandsia Baileyi have very similar growth, varying in only size and colouration.

The tiny silver-grey plants of Tillandsia Crocata are very attractive, and to top it off they produce a vibrant yellow flower that is highly fragrant. Another fragrant-flowered species is Tillandsia Mallemontii, which has purple flowers that smell of carnations.

As with everything in the plant world, you also get those rare and sought-after collector’s species. Because of their rarity or slow-growing habit, these are not as freely available and are therefore often pricier. The very interesting and elegant growth habit of Tillandsia Duratii makes it one of the most popular species from a collector’s point of view.

The long, narrow leaves curl at the tip like the tendril of a pea in order to attach to twigs. The large inflorescence produces lots of fragrant purple flowers in sequence and may flower for many weeks at a time.

Tillandsia Xerographica is almost extinct in nature and therefore the few seed-grown plants that are available are usually rather pricey. They are fairly slow growing as well and can take years to reach flowering size. When they do get to flowering, the much branched orange, red and green inflorescence is well worth the wait.

A really spectacular species that is also rather slow growing is Tillandsia Streptophylla. The pink and white inflorescence pair so well with the scaly silver-grey leaves.

The plants can get rather large in time. Many Tillandsia hybrids have been produced over the years, including some that are the result of an insect pollinating two different species that would not normally grow in the same area. In general, most hybrids tend to be a good improvement or combination of the parent plants but there are a few poor hybrids around as well. 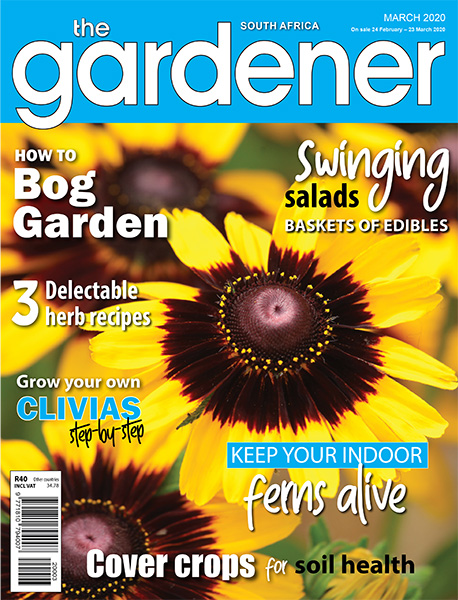