You are here: Home / Grow to Eat / Herbs / Turmeric Also known as Curcuma longa, Curcuma domestica is believed to have originated in India. The name ‘turmeric’ is thought to have come from the Latin terra merita, meaning ‘merit of the earth’. The richly coloured rhizomes of C. domestica have been used for centuries in some cultures for both culinary and medicinal purposes, while the leaves are also sometimes used in food preparation.

In Ayurveda traditional medicine it was prescribed for respiratory infections, gastric disturbances and for its anti-inflammatory properties. It was also used in cosmetic skin treatments in ancient India, with a paste made of finely pounded turmeric root mixed with lentil flour being used to cleanse and refine the skin in place of soap. It was used to dye cotton fabric and silk and, in modern times, to colour mustards, pickles, sauces, butters, cheeses and liqueurs. Turmeric is rich in an antioxidant named curcumin, along with other phytochemicals that are believed to be antioxidants and anti-inflammatories. Research into its use to prevent or treat various cancers and to treat heart disease, HIV/AIDS, Alzheimer’s disease and Parkinson’s disease is ongoing. Dried turmeric powder reduces histamine reactions if added to foods such as curries. 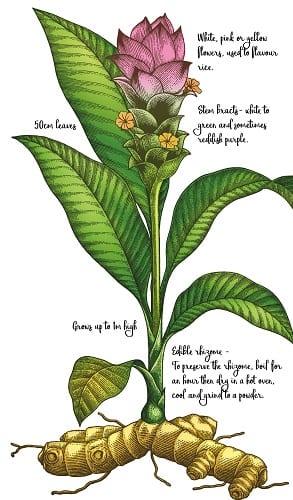 Turmeric is a truly tropical plant and cannot take the cold. Even in sub-tropical, steaming-hot gardens, it dies down completely in winter. Only when the weather warms up considerably does the plant push up its curved leaves, which are long and narrow, rather like a 50cm-long banana leaf, and borne on stems that emerge directly from the rhizome. The spectacular tubular flowers, in yellow, pink or pale green, nestle within frilly hollow bracts against the stem, low on the ground. Turmeric is propagated by rhizome division – the rhizomes are hard to find in our country, but I urge you to keep looking. It thrives in deeply dug, very richly composted, moist soil in light shade, and watering at least three times a week is essential. Every winter cover the bare ground where it has died back with rich compost and then leaves, creating a ‘blanket’ to keep it warm. Water it only once a week in winter.

Raw grated rhizome is best if you can find it, but powdered turmeric is easily found on the spice shelves in supermarkets. Add a teaspoon or two to curries, sauces, stir fries, rice and fish dishes, soups and stews. It has a warm, peppery and musky flavour that lends itself to every dish in which it is included. 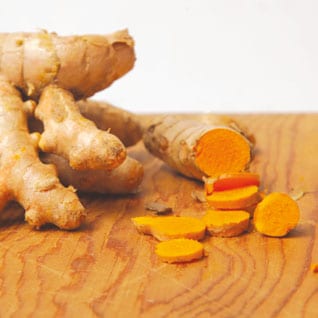 Sprinkle roasting potatoes with a mixture of salt, ground black pepper and turmeric powder and turn the potatoes in it. Turmeric stains easily, so be careful when using it, and be sure to brush your teeth well after eating a meal that includes it. About ½ teaspoon of turmeric added to a cup of hot milk, simmered for three minutes with a teaspoon of honey, is an ancient treatment for colds and sore throats. You can still use this recipe today – sip it slowly while it is still hot. The components of turmeric make it soothing and anti-inflammatory. It is believed that their actions ease arthritis and the symptoms of HIV, and help to remove toxic metals from the body. Talk to your doctor about it. Turmeric could be so hugely beneficial that soon we might all be agreeing with those ancient physicians who believed that turmeric was worth its weight in gold.