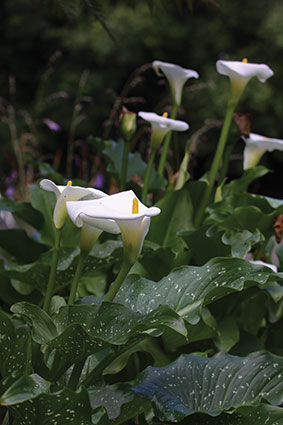 “Out of the blackest mud, come the whitest lilies” – this saying is a double-edged remark made about human characteristics, but it can be far better and less cynically applied to the lovely indigenous Zantedeschia aethiopica. Commonly known as the arum lily, it grows in the dark, fertile soil of wetlands and damp, marshy areas next to streams, and its snow-white, lily-like flowers are regarded as a symbol of purity. The ‘lily-like flower’ isn’t really a flower, but rather a large, modified leaf, usually called a spathe. It protects the masses of tiny flowers that are so densely packed in a central spike, called a spadix, that it is hard to distinguish them individually. Deep inside, nestling next to the spadix, you’ll often find little insects or even a small frog or two. The plant reaches a height of 0,6 to about 1 m, depending on the growing conditions. It emerges from a fleshy underground rhizome in the form of spongy stems carrying large, dark green leaves. Z. aethiopica is described as evergreen, but that often causes confusion amongst gardeners. Habitat and rainfall have a huge influence on its growth patterns. It remains evergreen if conditions are ideal, but it can lie dormant during winter in summer rainfall regions, and vice versa in winter rainfall regions. Two other species, Z. pentlandii and Z. rehmannii, and their hybrids, are deciduous.

They start in late winter, but mainly bloom from August to January. Sometimes you will be lucky enough to find isolated flowers during other times of the year.

Arum lilies will grow in most, if not all, parts of the country. In warm regions they will do better if they receive more water and shade, and in cooler regions the plants will be smaller and more compact.

Location: full sun to shade. In very deep shade the plants will still grow but you won’t see many flowers. They can be planted anywhere in your garden, but look their prettiest alongside a peaceful water feature.
Soil: the growing conditions preferred by arum lilies also cause confusion. The plants love marshy conditions that are always damp, but in the garden good drainage and water movement is very important – especially for modern hybrids. Ensure they have a very humus-rich medium by working in loads of compost or well-rotted kraal manure, and put down organic mulch around the plants.
Water: water deeply and regularly – at least twice a week.
Fertilizing: feed in spring and again in late summer using slow-release 3:1:5 or an organic equivalent.

Extra stock of Z. aethiopica can be obtained by digging up overgrown clumps after the flowering season and dividing them before replanting. They can also be propagated from seed, which is yellow and fleshy and appears after the flowers. Sow them in trays in a commercial seedling mix – in November in summer rainfall regions, and in February in winter rainfall regions. Keep the mix moist until germination has taken place, then transfer the small plants to pots, where they should remain for a year or two before being planted into the garden.

Arum lilies (especially the latest colourful hybrids) are the cut flower of choice for many floral artists because they last so well in water. Cut the stems early in the morning using a sharp knife and immediately place them in a vase filled with water that contains cut flower food. Replace the water regularly (adding cut flower food each time).

The larvae of the hawk moth love to feast on the leaves. Fortunately they are never present in large numbers and can be removed by hand in the evening (when they are actively feeding) with the aid of torchlight. Moles like to eat the fleshy rhizomes; if this becomes a problem one solution is to plant the arums in large wire baskets lowered into the ground.

Commercial growers regularly release new arum hybrids in all the colours of the rainbow. There are flowers in shades of maroon to near black, golden yellow, apricot, soft pink, cerise and red, to name just a few. They are propagated from summer-blooming species, are dormant in winter and like full sun. Tubers to grow these lovely arums in the garden or in pots are usually available in garden centres from August, and they have to be planted in spring, about 15 to 20 cm apart, and about 5 cm deep. Once they have been planted, scatter a 3 cm deep layer of mulch over them and water deeply twice a week. When the plants begin to flower, feed them every two weeks using bulb food. The coloured hybrids are also lovely in pots where the tubers can be planted closer to each other (5 cm). The pots should be placed in full sun and should never dry out completely, but good drainage is essential. In late autumn, when the plants start to die down they don’t need to be watered any longer. Those growing in the garden can remain there during winter if they can be kept dry, otherwise the tubers should be dug up, cleaned and allowed to dry, then wrapped in dry moss or coir to be stored away. Those in pots can be moved under cover, in their pots.