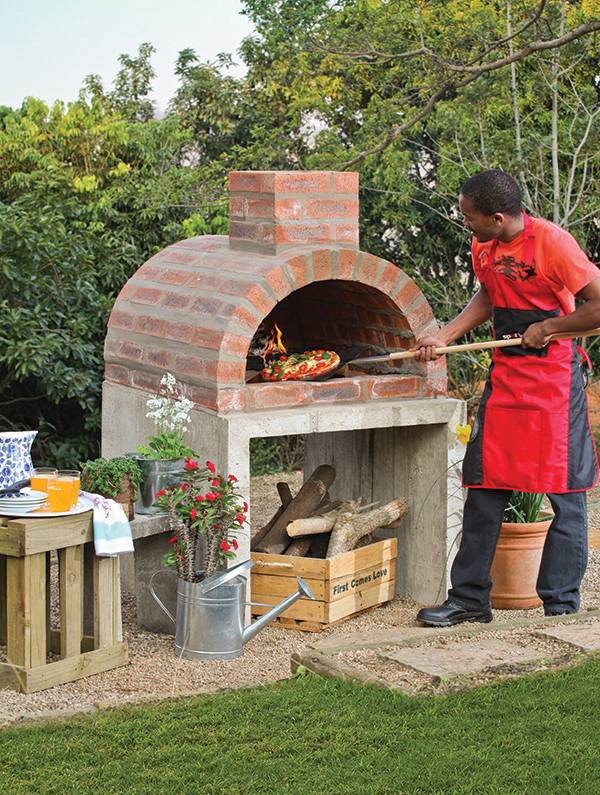 Build your own pizza oven

The function of a masonry oven is to trap and radiate heat from a fire, built inside the oven. The design of a pizza oven is heat-efficient, allowing the use of stored heat and coals for long bakes instead of requiring a live fire at all times. Smoke is vented through the front of the oven by means of a chimney, built above the oven door. This oven is built with fire-resistant materials. Similar ovens, designed for bread-making, are generally quite heavily built to store several hours’ worth of heat after completely burning a load of wood, while ovens designed for pizza or other live-fire cooking techniques can have a thinner construction.

64 firebricks for the oven

20 firebricks for the cooking base

12 firebricks for the chimney

1. First, you need to construct the frame over which you will lay the bricks for your pizza oven. You need to cut three ribs out of the shutter-board according to the dimensions (Fig A). Space the ribs equally along the length of the masonite board, then bend the board over the curve of the ribs and attach it with screws, using the cordless screw driver.

2. Once the frame is assembled you can start building. Position your frame in the centre of the concrete slab and mortar a single row of firebricks along one side and then along the other side of the frame. Soak the bricks in water for 10-15 minutes before applying the mortar. You will need four bricks placed lengthways for each side. These two rows of bricks will be parallel, on either side of the frame. Use the wider side of the brick jointer to smooth out the mortar between the bricks and the concrete base. Note: Always use the fire-resistant mortar mix when building a structure that needs to sustain heat.

3. Remove the frame and, using the brick trowel, mortar three more bricks on each end of the parallel rows, creating a brickwork frame. Clean the centre of this brickwork frame with a sponge and water in preparation for mortaring the cooking surface bricks on the diagonal. DO NOT mortar the sides of these bricks, only the base. Butt up the bricks as close together as possible.

4. Marking with a pencil, measure the bricks that need to be cut to fill the small remaining spaces after you have placed the full-sized bricks inside the brickwork frame. Using the mason’s chisel cut the bricks by scoring along your pencil line. To score, strike the end of the chisel with a two-pound hammer at each point along the line. Repeat a corresponding scoring line on the reverse of the brick. Alternate the scoring between each side of the brick until it breaks cleanly.

5. Replace the pizza oven frame on top of the base and mortar the first layer of bricks against the frame. The first course of bricks needs to be flush with the sides of the frame, so use a rubber mallet to even out the bricks as you go.

6. Stagger the second through fourth courses of bricks following the contour of the frame and repeat on the other side up to the seventh row. Return to the first side of the frame, staggering further layers of bricks, but leaving two rows unfinished at the top.

8.Mortar and stagger three more courses of bricks for the chimney. Check that the bricks are placed at 900 to create a perfect square.

9.Mortar and stagger bricks to the top of the oven to close up the back – you will need to cut some bricks with the mason’s chisel to fill the gaps and follow the curve.

10.Remove the masonite frame after 48 hours and then leave the pizza oven to dry for a further 3-4 days before the first firing. Note: From the first firing it will be seven days before you can bake in your oven. On the first day light only one piece of firewood and burn it through; on the second day burn two pieces of wood and on the third day three pieces. Continue increasing the wood daily until the seventh day, when you start by burning three pieces of wood and then add four more pieces when the fire starts to die down. Note: Never use chemical firelighters inside your oven.

Fixers for a Fly Free Braai