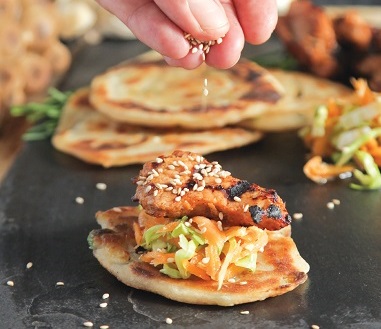 Spring onion pancakes with Chinese BBQ pork and pickled salad.
Serve all the recipes together starting with the pancakes, topped with the salad, the pork and a sprinkle of sesame seeds.

For the pancakes we used a simple dough that can also be used for things like dumplings. They are a bit time consuming but the flavour is worth the effort, and you can make them ahead of time. These are topped with BBQ flavoured pork fillet done quickly on a hot braai to get those delicious gnarly bits on the edges, and a refreshing pickled salad. This is bound to become a firm favourite in your home.

Marinate the pork in the sauce for at least an hour or preferably overnight. Cook on a hot grill. It won’t take long to cook through, so turn after a few minutes and cook the other side.

This is a simple side dish that cuts through the richness of the pancakes and pork.

Add all the ingredients together and let it infuse for an hour.

To make the pancakes, start with the dough. Place the flour in a bowl and pour in the boiling water. The measurements are an indication only as different flours will have different absorption depending on the amount of moisture in the flour. You are looking for the flour to absorb the water, but not be too dry or too wet. It should come together and be quite soft. As soon as you can touch the dough, bring it together and knead it until smooth. Add more flour or water if necessary. Cover the dough and let it sit for 30 minutes.

On a floured surface, roll out into a large rectangle around 3mm thick. Cover the surface of the dough with the lard and sprinkle with spring onions. Roll up the dough tightly into a long sausage. Cut into slices about 10mm thick. Each slice then needs to be rolled out again until flat and back to the 3mm thick.

To cook, cover a heated flat pan on the grill with the extra lard and melt it. Place the pancakes on the pan and cook until browned and crispy on both sides.