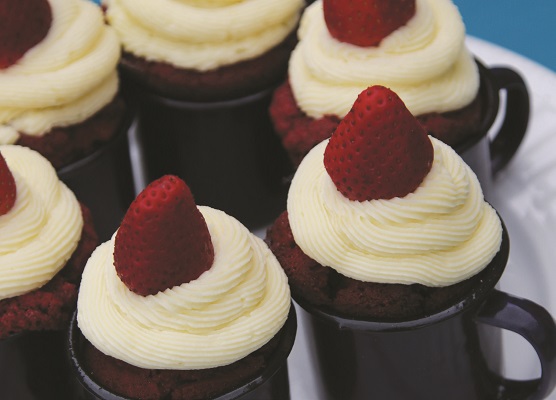 Many of us like a little something sweet after the main meal, and there are loads of puddings and desserts that can be made straight on the fire. This is ideal for camping where your cooking facilities are limited, and you won’t have to pack the oven along with the kitchen sink. Two of the recipes we mixed and packed into plastic bags for quick assembly at the
braai. This mixture needs refrigeration and can also be frozen for defrosting later

Tin cup cooking
Just about any cake mixture or bread mix can be cooked in a tin cup on the braai. The secret is to turn your braai into an oven, which is achieved by using a kettle or lidded braai. Some kettle braais come with thermometers in the lids, which helps to get the temperature just right. Alternatively, use a hand-heldthermometer to check the temperature – around 180°C is usually right. The other alternative is to place your baking in a deep tray on a normal braai and cover the entire thing in foil.

Red velvet tin cups with cream icing and strawberries
The combination of red velvet cake, cream cheese icing and fresh strawberries are a match we love, and they are pretty too. We cooked these in a kettle braai. Use our recipe to make them from scratch, or ‘cheat’ and use a boxed velvet cake mix to speed things up a bit.

Mix together the flour and salt in a bowl and set aside. Mix together the food colouring and the cocoa in another bowl until it forms a paste. Use a large bowl and a mixer to beat the butter and sugar together until it is light and fluffy. Add the eggs one at a time. Add the vanilla and cocoa paste. Alternate adding the flour and salt and the buttermilk, adding a little at a time until it is all added, and then beat until well combined. Place the mixture in a plastic bag until ready to use. Butter the tin cups, cut the corner off the cake mix bag and pipe into the tins. Prepare the fire and let it burn until the temperature reaches around 180°C. Place the cups on the grid and replace the lid. Cook for 10-15 minutes, until the cake is set on top. Cool to room temperature before icing and decorating with strawberries.

There is a bit of a trick in making this icing pipe-able, and that is not to beat the cream cheese too long. Overbeating will cause it to be too runny for piping. In a medium bowl, use an electric mixer to combine the cream cheese and the butter just enough to be creamy. Mix in the vanilla, then gradually add the icing sugar until it is all combined (and remember not to over-mix!). If the mixture seems a bit thick, add a few drops of milk. If it is too runny, add some more icing sugar. Place the icing in a piping bag with your favourite nozzle and keep refrigerated until ready to use. This icing should be used the same day.