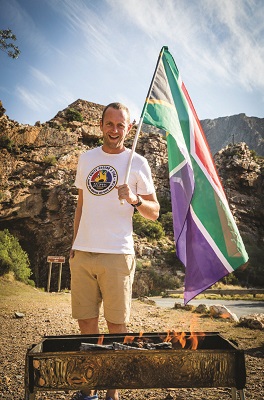 It’s your right to braai the best

Jan Braai believes that it is your democratic right to eat properly braaied food. His new book, The Democratic Republic of Braai, follows his previous, successful books. His first was Fireworks, which taught us the basics of braaiing, then came Red Hot, which showed us that a braai could be so much more. In The Democratic Republic of Braai, Jan shares the greatest braai recipes that he knows – because it’s your right to braai the best. Having started the National Braai Day movement in 2007, Jan is also the star of the TV programme Braai vir Erfenis on Kyknet, and even holds the world record for the longest braai. To say that Jan is a passionate braaier is an understatement. He believes that a braai is an opportunity to gather around a fire with friends and family, to celebrate our nation, to have conversations and share stories. In short, a braai is too important a place to suffer from badly braaied food.

Originally from Russia, this version of the old classic is right at home here in the Democratic Republic of Braai. To prepare a great beef Stroganoff you need the right ingredients and you need to follow the correct method. The most important procedure is to flash-fry thin strips of steak so that they have the taste of having endured intense heat, without completely drying out. It is best to do this is in your large fireproof pan, as there is no better way to truly generate lots of heat than with the licking flames of a proper wood fire.

WHAT TO DO
1. Light the fire.
2. Cut your steak into thin strips, as thin as you possibly can. You should obviously cut against the grain. If you don’t manage to cut the steak in thin strips, get a new knife, a knife sharpener, or both.
3. Now get some flames under your fireproof pan or large flat-bottomed potjie, add the oil and fry the steak in batches. You don’t want to steam the meat, so it’s better to have less meat in your pan. As the strips of steak are thin, they should fry for just a minute, until they have colour. When all the meat is cooked, season with salt and pepper, put it in a bowl and send it to the business class lounge to wait for its next flight.
4. Add the butter to the now empty pan or potjie and fry the onion and bell pepper until soft.
5. Now add the garlic, paprika and mushrooms and stir-fry until the mushrooms release their juices, the juices evaporate and the mushrooms get colour.
6. Call the meat back to the potjie and be sure to also add all the meat juices that collected in the bottom of the bowl. Toss around so all ingredients in the potjie are well mixed. Immediately proceed to the next step.
7. Stir in the sour cream and mustard and then let it all simmer for about 4 minutes, at
which point the meal is ready to be served.
8. While you’re preparing the beef Stroganoff , also cook your pasta according to the instructions on the packet. I prefer fresh pasta for this dish but normal dry pasta will also work.
9. Serve the beef Stroganoff on a bed of freshly cooked pasta, season with salt and pepper, and garnish with freshly chopped parsley

Amarula malva pudding in a potjie

It’s been a very long time since I last made a malva pudding that was not made in a potjie. The quantities and properties of this recipe fit a no. 10 flat-bottomed baking potjie so perfectly that I can’t imagine doing it any other way. As with my original malva potjie recipe, this one is still based squarely on the actual original by Michael Olivier and Maggie Pepler. What I found works very well though, is to replace the cream in the sauce with one of South Africa’s true culinary heritage icons, Amarula Cream. The recipe is really quite foolproof and a valuable card to have up your sleeve.

WHAT TO DO
1. Light the fire. You need fewer coals than when braaiing steak, but you’ll need a steady supply of coals once the pudding is baking.
2. Use butter to grease your no. 10 flatbottomed baking potjie.
3. Sift the flour and the bicarbonate of soda into a large bowl and stir in the sugar (you don’t need to sift the sugar).
4. In another mixing bowl, whisk the egg very well. Now add the jam, vinegar, butter and milk, whisking well after adding each ingredient.
5. Add the wet ingredients of step 4 to the dry ingredients of step 3 and mix well.
6. Pour the batter into the potjie, put on the lid and bake for 45 minutes by placing some coals underneath the potjie and some coals on top of the lid. Don’t add too much heat, as burning is a big danger. There is no particular risk in having too little heat and taking up to 1 hour to get the baking done, so rather go too slow than too fast. During this time, you can add a few fresh hot coals to the bottom and top of the potjie whenever you feel the pudding is losing steam.
7. When the pudding has been baking for about 40 minutes (about 5 minutes before it’s done), heat all the sauce ingredients  in a small potjie over medium coals. Keep stirring to ensure that the butter is melted and the sugar is completely dissolved, but don’t let it boil. You want the sauce as hot as possible without actually boiling.
8. After about 45 minutes of baking, insert a skewer into the middle of the pudding to test whether it’s done. If the skewer comes out clean, it’s ready.
9. Take the pudding off the fire and pour the sauce evenly over it. Believe me, it will absorb all the sauce – you just need to leave it standing for a few minutes. Serve the malva pudding warm with a scoop of vanilla ice cream, a dollop of fresh cream or a puddle of vanilla custard. A good way to keep it hot is to put it near the fire, but not too close – after doing everything right, we don’t want it to burn now.

AND…
If for whatever reason you don’t want to use alcohol in the dessert, simply replace the Amarula Cream in the sauce with normal fresh cream. You will still end up with an exceptionally good malva pudding, the original.