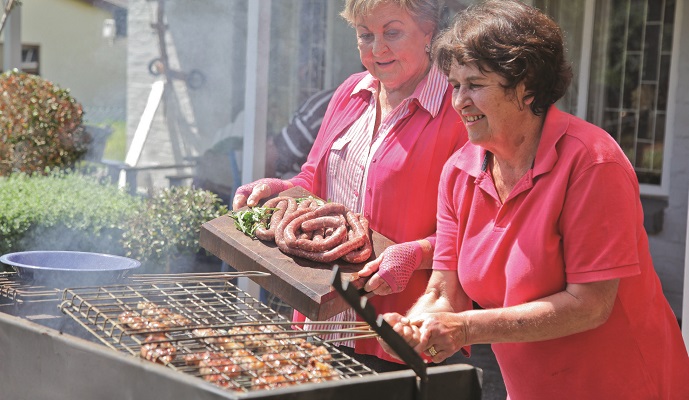 The rich aroma of whole coriander seeds scorching in the kitchen fills the home and wafts in fragrant clouds onto the stoep. It could mean only one thing – Flick du Toit is in the house, and she’s making her champion boerewors! Flick grew up on a sheep farm in Bedford in the Eastern Cape, descended from English settlers and a smattering of Voortrekker stock. After dabbling in secretarial jobs and producing four girls, she became one of the first ladies in the country to open her own speciality butchery in Somerset West. This meant that she had to work as a ‘block woman’, identifying and preparing the best cuts of meat from huge carcasses hanging above her head. Her shop soon became a butchery with a difference, as the pretty and always immaculately groomed Flick created a hospitality area in her butchery, allowing customers to have tea and cake, and tastings of her biltong and dried wors, while she discussed her different speciality lines with them. But Flick also inherited a boerewors recipe from one of her grandmothers, which she put to good use with a twist or two of her own. In the early eighties she won the national Kellerprinz Braai Competition’s ‘Best Wors’ award four years in a row. She also won many other prizes and accolades, and has piles of old newspaper and magazine clippings that feature her as a woman who became “no stranger to meat!” Flick eventually sold the butchery, after which she took over the well-known restaurant Jonkershuis, at Groot Constantia, where she treated local and foreign clients to traditional South African fare like smoorsnoek, venison pie, bobotie and waterblommetjiebredie. To this day, nobody in their right mind ever declines an invitation from Flick to dinner, lunch, or even breakfast!

You have to make lots of this, as the wonderful aroma will attract eaters from far and wide!

1 kg of butternut or pumpkin, diced
6 sliced guavas
2 oranges, segmented and with the white parts removed
250 g of brown sugar
½ cup of ginger syrup (you can also add small pieces of preserved ginger if you’d like to)
Cinnamon to taste
10 whole cloves
¼ cup of water

Combine all the ingredients in a flat-bottomed cast iron pot. Place the pot over a few hot coals while you braai your meat. Let it simmer peacefully, stirring occasionally until the pumpkin is cooked through. Add this to your table along with these dishes.