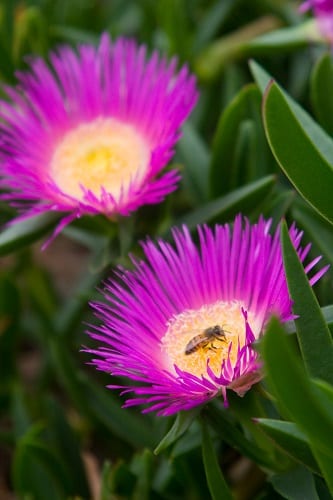 No garden should be without the Sour Fig, an extremely valuable indigenous medicinal plant which originally occurred in sandy areas along the Western and Eastern Cape coasts, but is now commonly grown in many parts of South Africa as it is hardy, easy to grow and a proven stabiliser for dunes and embankments.

The Sour Fig is a well-known Cape plant and is a robust perennial creeping succulent with smooth, fleshy, erect leaves and large, striking yellow flowers. The fleshy and fragrant fruit with its jelly-like texture, masses of tiny seeds and distinctive sweet-sour taste is an old Cape delicacy which is still sold at local markets in and around Cape Town.

Undoubtedly though, the medicinal uses of the Sour Fig plant are the most important of all – a wonderful legacy from the Khoi people who called it ghaukum. As far back as the mid seventeenth century the Khoi used ghaukum for healing wounds, and still today a pulp made from the leaves can be applied to wounds, burns, open sores and skin infections, particularly eczema. Instead of the pulp, leaf juice can be applied in the same manner for the same purpose. It is well known that the leaf juice of Sour Fig is a very effective treatment for blue bottle stings.

The highly astringent leaf juice, which contains tannins, is also excellent when taken for acute diarrhoea. A very good traditional remedy for sore throats, throat and mouth infections is to gargle three times daily with fresh leaf juice. The fresh juice of the Sour Fig is also used to treat oral as well as vaginal thrush. In the Cape, small quantities of fresh juice are frequently used for babies suffering from nappy rash and mouth thrush.

The other six carpobrotus species found in the Western and Eastern Cape all have astringent leaves that can be used for the same medicinal purposes.