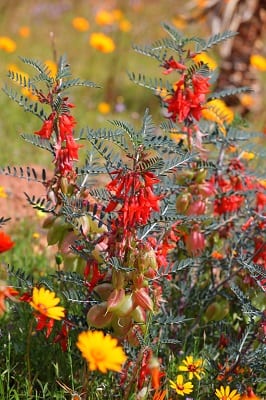 Sutherlandia Frutescens, a small shrub, which can be upright or semi-decumbent (the stems grow parallel to the ground and then upwards), can grow to a metre high and is distinguished by narrow silvery grey-green leaves and attractive loose clusters of coral-red pendulous pea-shaped flowers. The distinctive inflated balloon-like pods that contain the seeds easily float on water when they are broken off the stem, and their resemblance to geese is responsible for the descriptive vernacular name ‘gansies’.

Sutherlandia Microphylla closely resembles Sutherlandia Frutescens and they are both widespread throughout the winter rainfall region, where plants are usually found growing singly rather than in groups. They normally flower in June and July.

Traditionally both Sutherlandia Frutescens and Sutherlandia Microphylla were known to be good tonics that provided all-round medicine for many ailments. The Khoi used a decoction of the bitter crushed leaves externally for washing wounds and internally for fevers.

The early Cape colonists successfully treated chicken pox with it. Infusions or decoctions of the leaves were drunk for stomach and intestinal problems, indigestion, gastritis, dysentery, haemorrhoids as well as liver and kidney conditions. Infusions and tinctures of the leaves and young stems were used for colds, influenza and bronchitis, and the powdered leaves mixed with syrup were a very good remedy for relieving troublesome coughs.

The plant was also used to treat backache, rheumatism and diabetes and a weak infusion taken before meals improved appetite and digestion. Taken as a tonic, it lessened anxiety and promoted better sleep.

Over the past decade increasing scientific and medical research has shown that Sutherlandia can be regarded as a great natural adaptogenic tonic. It helps to strengthen the body by activating its immunological and physiological resources against disease as well as the physical and mental stress of daily life.

The active compounds: L-canavanine, pinitol and the amino acid GABA, have been identified in high quantities in Sutherlandia and contribute to the plant’s importance. Sutherlandia boosts the immune system; lessens depression; anxiety and stress while promoting energy and vitality. It is used as a tonic for convalescents and can be used as supportive therapy to improve the quality of life of people suffering from serious and debilitating illnesses.