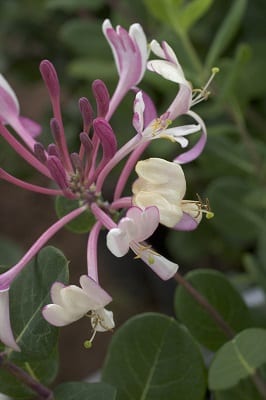 Lonicera, or Honeysuckles as they are commonly called, are found growing naturally in many parts of the Northern Hemisphere. They include over 180 different species of evergreen and deciduous shrubs and climbers.

Many are cultivated for their attractive, sweet scented flowers that are usually borne in spring and summer. The correct names for the various different species and numerous garden hybrids are often confused. Many an incorrect name has been applied in the local garden trade and this particular plant is one of those that’s been sold by various names.

Lonicera x Americana would appear to be the correct name for the plant in the picture, however this may be open for future debate. It is an outstanding garden plant irrespective of the name and correct identity.

A vigorous, deciduous, climber with grey-green leaves in opposite pairs, its upper new leaves are joined together in an unusual manner. The tubular, pale yellow flowers are flushed pink or purple on the outside with a rich fragrance that permeates the garden. These flowers are borne in great profusion during late spring and into the summer months.

This Honeysuckle grows in sun or dappled shade and needs some means of support to grow on. Plant it against fences or boundary walls and train it over archways and up pergolas. Once flowering is over, prune it back hard to keep the plant neat and tidy. If it is not pruned it can become untidy and woody with leaves and flowers only on the outer extremities of the plant.

Apply a balanced garden fertiliser such as 3:1:5 to the root zone 3-4 times a year to ensure peak performance. This old-fashioned plant seems to have lost favour amongst plant growers and gardeners alike. It’s sure to make a comeback in the near future, being easy to cultivate and very rewarding. It adapts to varied garden environments. There are numerous species of climbing Honeysuckles, some of which are rampant and can become a nuisance in the garden, so you need to select your plants very carefully!