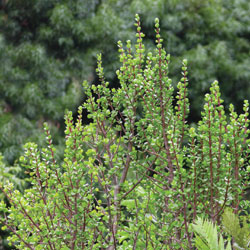 The spekboom or porkbush, also known as elephant’s food, olifantskos, soetspekboom, suurspekboom, igwanishe (Xhosa) and intelezi (isiZulu) has multiple uses in ornamental horticulture and is suited to almost every South African garden, except those in the very coldest areas. It is native mainly to the eastern summer rainfall parts, occurring in full sun on dry,rocky hill-slopes from the Eastern Cape through KwaZulu-Natal, Swaziland and Mpumalanga to Limpopo, and is also found in the Little Karoo in the Western Cape.

In parts of the Eastern Cape it is such an outstanding feature of the landscape that the vegetation is known as spekboomveld. A member of the African and Madagascan family of spinystemmed succulents (Didiereaceae), Portulacaria is endemic mainly to Southern Africa, and there are six other species, found in Namaqualand, Namibia and Angola.

The spekboom is a succulent shrub, groundcover or small tree up to 4m high, but usually much less in cultivation. It has round or oval-shaped, lime green to dark green, yellow or variegated succulent leaves, and reddish or grey stems with shiny bark that becomes corky with age.

The dense clusters of small, pink, starshaped flowers appear towards the end of winter and are in full bloom in spring and early summer. The nectar-laden flowers are attractive to many insects, including honeybees and butterflies, and the leaves are readily grazed by animals including tortoises, antelope, livestock and elephants. Although they impart a sour taste, the raw leaves are also edible to humans and can be included in salads.

They are thirst quenching, and when sucked they aid against heatstroke and dehydration. In addition, the leaf juice has a multitude of medicinal uses, such as relief from sore throats when chewed, or as a skin application for treatment of insect stings, rashes and sunburn.

A notable environmental asset of the spekboom is its very high capacity for carbon-storage and conversion to oxygen, thus it is definitely a plant that should be grown more widely.

The spekboom has numerous cultivars with markedly different growth forms. The groundcover cultivar ‘Prostrata’ has a creeping or hanging habit and is especially useful in stabilising sloping ground, and highly attractive when allowed to cascade over rocks and low garden walls. The leaves of the striking cultivar ‘Aurea’ turn bright yellow in full sun, and it is recommended for planting in informal groups towards the rear of wide borders.

The upright, large-leafed cultivar ‘Limpopo’ can be grown as a specimen feature plant. There are also several variegated forms with white- or yellow-striped leaves. If regularly clipped, the spekboom forms an outstanding, impenetrable and long-lived hedge. All the cultivars can be grown in containers and are ideal subjects for bonsai, and ‘Prostrata’ is also suited to large hanging baskets.

The plants prefer a warm, sunny spot, but can also be grown in light shade. They are moderately frost-hardy and grow easily in any well-drained soil containing some decomposed organic matter, and can be set out into the garden at any time of year. Once established they are long-lived and very waterwise, and hardly ever subject to pests and diseases. Propagation is best from cuttings taken in spring, but allow the cut surfaces to dry for several days before planting directly into open ground or trays  filled with river sand.