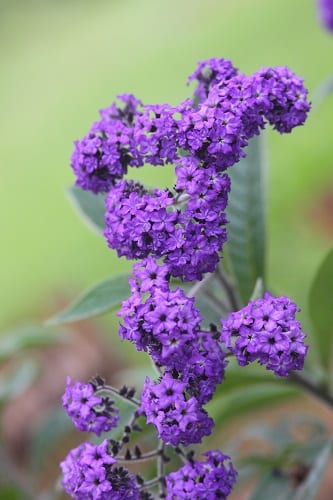 Another striking plant in all its glory at this time of the year is the continuously- flowering Heliotrope, which is mostly native to the Peruvian Andes and parts of Europe, and a much-loved, old-fashioned, soft-wooded evergreen shrub that can take partial shade. The flowers smell of stewed cherries and our grandmothers called it ‘the cherry pie flower’.

It is so loved by the butterflies that it is well worth cultivating for that reason alone. Once found in cottage gardens around the world – specially in Europe – Heliotrope has held its own through the centuries, and bunches of it were gathered to place in churches where the scent was calming and comforting.

For religious ceremonies Heliotrope bunches were tied to the pews and placed around candles as a sign of reverence, and scattered on the floor around the pulpit and around religious statues. And then it was forgotten. Every now and then you’d see an old neglected bush in an old garden, thick with butterflies.

It is the clusters of rich, dark purple (there is a paler mauve variety too), scented flowers that get one interested; they literally go on and on. I bunch them around pink rosebuds with a frill of rose-scented geranium leaves, making little tussie-mussie posies, for a sick friend or just to say: “I’m thinking of you” and this highly scented little gift has them crowing with delight!

Heliotrope is my ‘standby’ in the garden; it thrives on neglect and the storms and the heat waves. It takes heat and cold and withstands so much it has become a favourite of mine, and never more so than now in the intense heat and the gusting winds and the extremes this relentless summer has offered.

I have grown it at the back of an all-mauve border and am amazed at its resilience and longevity, its uniform growth and its abundant flowers. My most spectacular bed has been a row of standard iceberg roses with a row of Heliotrope between them and in front of them, and a double row of mauve and purple violas in front. It stops visitors in their tracks every time. The flowers are also beautiful when dried and mixed into lavender potpourris.

Heliotrope can be found in some nurseries – it’s worth searching for, and it propagates by cuttings, rooted in wet sand. It will grow up to 75cm in height and width and does best in partial shade or where it will get afternoon shade. Plant each one in a deeply-dug, richly-composted hole, spaced 1- 1½ metres apart and water deeply twice a week.

Once a year give it a dressing of compost and water it in well. In mid-winter prune back the growth by one third and in spring the new burst of flowers will astonish you. I cover the pruned shrubs with a light tee pee of veld grass in case of a severe frost, and by the end of the winter the new little buds appear. Heliotrope really deserves to be a feature in our gardens once again.