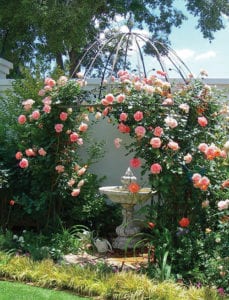 What do you expect from your roses? Do you want large, perfect blooms for picking or do you prefer masses of blooms that provide a show? Do you enjoy pampering your roses, or should they just look after themselves? Every gardener is different and wants different things, which means there is no right or wrong way of pruning roses.

Varieties also differ. Those like ‘Cora Marie’ and ‘Andrea Stelzer’ that produce very long-stemmed blooms can be tamed by light pruning. On the other hand, varieties like ‘Duftwolke’, ‘Egoli’ and ‘New Zealand’ tend to sprout from too many eyes if lightly pruned, resulting in many short-stemmed blooms as well as many blind shoots that don’t form a terminal bud. All this needs to be taken into account before you start pruning in July.

This is applicable if one of the following boxes is ticked:

Light pruning is simply a light trimming of the rose using hedge clippers and the removal of dead or twiggy growth to open up the bush. You can also cut out crisscrossing stems and reduce forked stems to a single tine. This means that the rose is not cut down substantially but remains tall with plenty of stems that will sprout quickly in spring. This quick sprouting produces green leaves that feed the roots, giving the rose a good start.

Roses in problem areas (against a wall, in the shade or among other plants) need to have sunshine on their stems and leaves to grow, which means they must be above other plants. It doesn’t matter if their roots are in the shade. Roses that are cut down to the same height as other plants in the bed struggle to outgrow their companions and performance suffers as a result.

Light pruning also activates the roots which spread out and go deeper, allowing the rose to withstand some neglect or irregular watering. The effect of light pruning on flower production is that the rose produces lots of short-stemmed flowers that may be smaller than single specimens but are still perfectly shaped. Even lightly pruned hybrid teas produce masses of blooms when lightly pruned.

When light pruning Panarosa roses, make sure to keep the arching stems. When new stems develop the older ones can be removed the following year.

This is applicable if the following boxes are ticked:

Medium to severe pruning reduces the height of the rose to about 50cm and removes most of the stems leaving 2 – 3 young, healthy stems to form the framework of the bush. This stimulates the development of new basal stems, as well as long flowering stems from eyes on the remaining stems.

This pruning method also allows space to grow for roses that are planted close together, because of limited room or because you want a massed rosy effect.

However, cutting back hard means that you have to renew the soil by digging in fresh compost and organic material to a depth of 30cm, and fertilising so that the roots are in rich, free-draining soil. Regular watering is also essential if the plant is to send out ample new growth in spring. This needs to be followed by regular watering, monthly fertilising and spraying throughout the year for maximum performance.

‘Iceberg’ and similar roses do well with light trimming, but after a few years the bushes may become very large and tall. The base often becomes denuded, but that is not a problem if annuals or perennials are planted around the base.

If the bushes have become too big, cutting back the top of the bush will force new shoots from the lower woody branches and stems. Do not cut directly into the woody stems as it takes a long time for the dormant eyes to sprout, and if the plants to not get enough water they may die. Rather wait a year and cut back to the new stems when pruning the following year.

These are another special case. Climbers that only flower in spring, mostly Heritage and Banksia roses, should only be trimmed or pruned after flowering.

Modern, repeat-flowering climbers like ‘Towering Rose Magic’ or ‘Wedding Garland’ are tidied up by loosening the ties and opening up the plant so that old stems can be removed. The remaining stems are trimmed but not cut back. Cutting back very vigorous climbers will make them grow without flowering for the whole of the coming season. Retie the stems, positioning them as horizontally as possible to encourage sprouting all the way along the stem.

In most areas the roses can be pruned from 12 July until 2 August, except for very cold areas where pruning should be delayed until mid-August. This includes gardens alongside low-lying streams and rivers that tend to be much colder than areas slightly higher up.

It helps to have the right equipment: a thick, strong pair of garden gloves, a longhandled lopper and a pair of secateurs. We recommend Star 6 as reliable, strong secateurs. When cutting, make sure that the thick blade of the secateurs or long-handled lopper is facing up and is pointed away from you. If the thicker blade faces downwards it will bruise the stem severely.

After the roses have been pruned, pull off all leaves because they can harbour pests and diseases. Dig in compost, superphosphate and fertiliser (Ludwig’s Vigorosa 5-1-5 (25) or Vigor-longer around each pruned bush. Water well afterwards. Water weekly until end of August, then increase watering to twice a week.

Spraying after pruning is not necessary if you carried out a regular spraying programme during the growing season. However, if the roses have suffered from scale or mealy bug, spray with a double strength Ludwig’s Insect Spray (100ml in 5 litres of water) or Oleum as this will smother any residual scale.