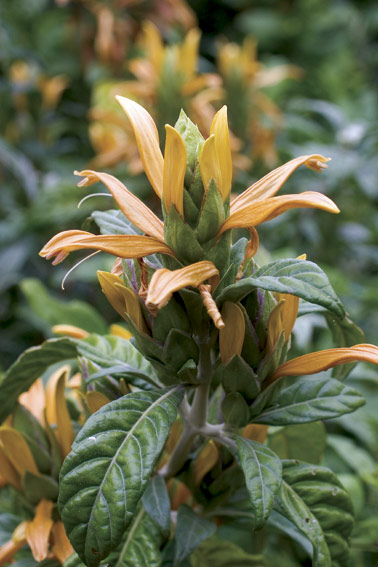 The Metarungia Longistrobus needs little attention, provided that the plants are well mulched and fed with an organic fertiliser twice a year.

It can be planted in sun or semi-shade, where it will grow to two metres in height and equally as wide. The attractive grey-green leaves are large and are often covered with dense grey hairs. In a large garden they look better planted in a group of three but a single bush also looks good.

The long, tubular, orange-coloured flowers sit on a cone shaped spike at the tip of the branches. When a bush is in full flower, the sunbirds and butterflies enjoy the copious nectar it produces. The Sunbird Bush flowers from January right into the late autumn, after which it produces large seed capsules that explode as they ripen during the dry winter days. New plants will germinate under the large mother plant and they may be transplanted into other areas of the garden. These seedlings will flower in their first year.

Metarungia Longistrobus can be pruned after flowering or after winter, depending on the amount of frost in the garden. They are fairly frost-resistant in a cold garden, especially under large trees.

More Than A Garden Shed

How to maintain a healthy family and healthy heart at home