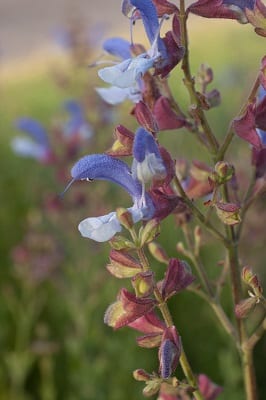 This evergreen, much-branched shrub with its attractive blue flowers is almost certainly one of the earliest indigenous medicinal plants of the Cape, and its medicinal properties were probably the reason why it was cultivated in the famous Amsterdam medicinal garden in the early 1700s. SALVIA chamelaeagnea and our other indigenous salvia species have long been used as traditional medicines. The Khoi used a decoction or infusion of leaves to relieve coughs, colds, bronchitis and general chest complaints and the early colonists used the plant in much the same way as SALVIA officinalis was used in Europe (where its medicinal use dates back to antiquity). An infusion of SALVIA chamelaeagnea, mixed with magnesium sulphate (Epsom salts) and lemon, has long been known as a household remedy for stomach problems, and a tea made from fresh or dried leaves was used for liver conditions and digestive problems, as well as for nervous disorders. An infusion of the leaves and flowers was a known treatment for diarrhoea and the leaves, baked in sweet oil, were known as a cure for earache. With respect to the other indigenous salvias, a known Khoi remedy for fever – SALVIA africana-caerulea mixed with BALLOTA africana (kattekruie) – was later used by both the Khoi and the colonists to treat measles. A decoction of SALVIA stenophylla leaves was a remedy for sore throats, sores and swelling and the aromatic leaves of SALVIA disermas were used as an antiseptic.