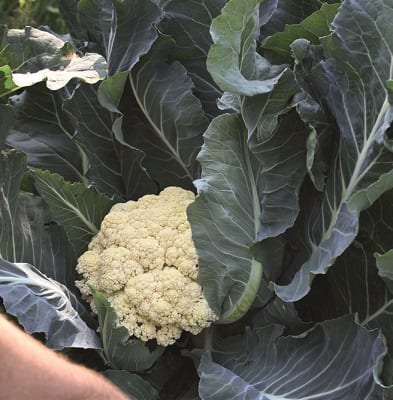 Cauliflower is regarded as the aristocrat of the vegetable world, and there certainly is something venerable about a large, snowywhite head of cauliflower.

I talked to members of the older generation about growing cauliflowers, and it turns out they have a few tricks up their sleeves. For early crops they choose the coolest section of the vegetable garden and plant in positions that receive afternoon shade. Once the head, known as a curd, is about 10cm in diameter, some of the outer leaves can be brought up and folded over the head to prevent it from discolouring. My father keeps the leaves in place with paper clips, but string also works. I have a trick of my own too – growing cauliflowers in containers. It’s great fun, especially if you can find baby varieties. They can then be placed in the best possible growing position and conditions. The containers need to be quite big and deep, as a single cauliflower has a spread of about 40cm. Can you imagine what a novelty it would be as a container plant? We always grow chillies as decorative container plants, especially for the festive season, and I think the combination of pots of chillies and pots of cauliflowers is spectacular. Use them as table decorations, and if you want to be really creative you can colour the heads with natural plant colourant to match your colour scheme.

SOIL PREPARATION
Being a gross feeder, cauliflower needs very fertile soil that should be enriched with lots of compost and perhaps even a granular fertiliser like 2:3:2. It does best in heavy soils as these retain nutrients better than sandy loam. Lime should be added to slightly acidic soil. If you are not in a rush to sow, take your time in preparing the bed and adding compost until you feel it is rich enough.

SOWING AND SPACING
Seed can be sown in seedling trays but it is better to sow in situ. The seeds are quite big and must be planted at least 1cm deep. Cauliflower needs space to develop, so don’t plant the seedlings too close together and sow seeds 45-60cm apart. I like to plant three seeds per hole, and then to pick out the weaker seedlings to eat as sprouts in a salad. But if all three seedlings are healthy, some can be transplanted. When the seedlings appear, mound up the soil around them because they tend to fall over. Cauliflower is not the kind of vegetable that can be eaten every day, so even for a family of four it is probably only necessary to aim for five plants per sowing. The interval between each successive sowing (two weeks to a month) depends on the quantity of cauliflower you want. Transplanting the thinned out seedlings from each sowing will act as succession planting.

WATERING
Cauliflowers need lots of water but don’t like wet feet. Adjust the watering according to the rainfall and when there is limited rainfall make sure that they never dry out. When they wilt they stop growing.

FEEDING
Fertilise every two weeks either with a side dressing of granular fertiliser or a liquid fertiliser.

HARVESTING
Cauliflower is a long crop that takes 4 months (16 weeks) to harvest. Strong sunlight affects the quality of the curds, changing them from creamy white to light yellow, which is why they should be covered by leaves. Only do this once they are about 10cm in diameter. Monitor the condition and texture of the head rather than the size to determine when it should be cut. The head should be fully developed and nicely rounded, and should be picked before branching. The curd, with a few surrounding leaves, should be cut off with a sharp knife and then the whole plant pulled out. If it is not diseased then put it on the compost heap, otherwise discard it. If the curds are hung upside down in a cool, dark place they will last for about 3-4 weeks. This is an old storage practice used before refrigerators were a household item.

Pests
Cutworms can be a major problem. Use cutworm bait or keep the cutworms away by pushing an empty cardboard toilet roll into the soil so that it forms a collar around the seedling. The cardboard roll will eventually decompose. Aphids can also be a problem, which is another reason why the plants should be spaced well apart. Use an organic insecticide recommended by your garden centre or spray with a light solution of soapy water

RAINBOW BRASSICAS
You can now grow cauliflower and other brassicas in shades of purple, orange and green that, together with the normal white varieties, make a fine picture. The purple varieties are known for having high anthocyanin levels, which are good antioxidants, but eat it raw if it’s the colour you like as it turns green when cooked. Try some of the colourful new brassica varieties available in seed:

This cauliflower-based pizza is a sure winner for the whole family!