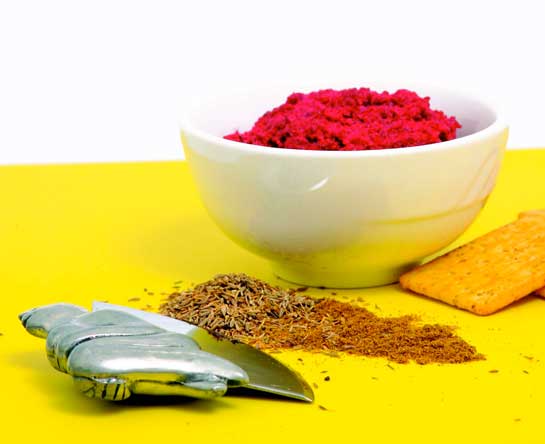 Cuminum cyminum
by Margaret Roberts
Cumin is a true exotic, a flavour-filled treasure! It has played a vital role as both food and medicine and its journey across the world is utterly fascinating.
Cuminum cyminum is native to Egypt and the eastern Mediterranean areas, but its exquisite flavour made it an integral spice in the history of the cuisines and medications of the Middle East, Spain, Mexico and India. In ancient Egypt it was a treasured ingredient in the mixtures used to mummify the pharaohs; in the Bible it is mentioned as a seasoning for soup and as a tithe. It is also an ingredient in the Indian spice mixtures known as advieh and garam masala, in the Afghan char masala and in the pickling mixes of Spain. It was also used in Roman ceremonial wines and meat condiments. In the first century AD Pliny the Elder listed it as “the spice that no one ever tires of”. Cumin is listed in the pharmacopoeias of the world and in several countries, mainly India, China and Indonesia, it is still a valuable export commodity.
Research has verified its reputation for having extraordinary digestive, soothing and calming qualities – it has been found to stimulate the secretion of pancreatic enzymes that aid nutrient digestion and assimilation. Its rich volatile oils are both antispasmodic and calming and are now being found to protect against certain cancers, specifically liver and stomach tumours. It has been found to have detoxification abilities, particularly in the liver, and potent free-radical activity.
Growing cumin
My best plantings of cumin are in early spring, before the heat of the summer, or in March, before the winter frosts, but it is certainly worth experimenting to find out when it does best in your area. It is a quick-growing annual, but does not transplant easily, however, sown in the following way I have found it does very well.
• Line a few plastic pots no smaller than 20 cm in diameter with several layers of newspaper. Fill with compost and wet thoroughly.
• Thinly sprinkle cumin seeds over the surface of each pot, cover with a fine layer of sand and keep moist with mist spraying. Keep the pots shaded and moist and never let them dry out. You also need to protect them from birds, squirrels, rats and mice; they all love cumin.
• Once the little seedlings are sturdy and about 4 cm in height (they look like little blades of fragile grass) move the pots out into the sun for short periods each day.
• Choose a bed in an area that gets full morning sun and, preferably, afternoon shade. Dig it over and incorporate lots of compost. Make a wide furrow in the bed, flood it with water then dig holes in the furrow, 40 cm apart, and deep enough to accommodate the contents of the pots.
• Carefully ease out the newspaper-lined soil plus seedlings, place in the holes and fill in with soil, being careful not to disturb the roots. Keep shaded for at least 2 weeks to establish the little plants and water gently by flooding the furrow.
Using cumin
The flowers, green leaves and green seeds are delicious in salads and stir fries. The best way to use cumin seed is lightly roasted (simply stir in a pan for 3 minutes) then crushed gently in a pestle and mortar and added to slowly cooking stews, curries, rice dishes, soups and casseroles. Whole seeds can be added when baking bread, biscuits, pancakes and scones; it can also be mixed into cheeses. Keep cumin seeds in the fridge and chew a few to ease the digestion.
As an antioxidant, an anti-inflammatory and with its antimicrobial properties, cumin is becoming valuable as a natural analgesic. Warmed moist seeds (soaked in boiling water and lightly crushed) can also be applied as a poultice over swollen inflamed areas such as arthritic joints, sprains and bruises – the way it was recorded in ancient times.
Cumin paste
Make this paste and keep it on hand to flavour stews, chicken and fish dishes, soups, desserts – specially stewed fruits – stir fries and curry mixes. In this way this precious spice can be easily and quickly added to the diet. Mix ¾ cup of cumin seed that has been roasted and lightly crushed with ¾ cup of honey. Warm together in a double boiler and stir well. Add 2 to 3 tablespoons crushed black peppercorns and ½ tablespoon crushed cardamom seeds (discard the pods). Simmer for 10 minutes, stirring well. Pour into a sterilized jar with a good screw top.
Add 1 to 2 teaspoons of the paste to your dish while it is still cooking and stir in well. This is the ‘touch of magic’ that is often written about!
Cumin tea
Boil 2 teaspoons of cumin seed in 3 cups of water for 3 minutes. Stand aside to steep, covered, for 10 minutes. Sip a little at intervals throughout the day to ease tension, digestive upsets, diarrhoea, nausea, ‘butterflies in the tummy’, anxiety, nervous tension and for that feeling of not coping.
Cumin seeds are available by post from Margaret Roberts Herbal Centre, PO Box 41, De Wildt. Phone 071 161 6441 (mornings only) to order.
visit www.thegardener.co.za for the recipe.