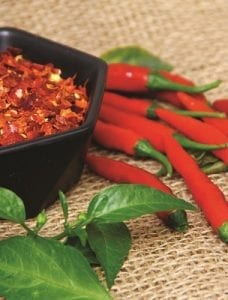 If you’re addicted to chillies, here’s how to grow them successfully from seed – there’s a world of unusual varieties to try!

Want to add an exotic element to your veggie garden? Chillies (Capsicum species) will do it. In the vegetable garden they are the kings of bling, not shy to show off their bright, shiny fruit, which weighs down the plant in an almost ostentatious display of edible good looks. Ranging in heat from mild to hot to extreme, chillies are not just a novelty. Besides getting your heart rate up and kick-starting sluggish circulation, they are rich in vitamins A, B2 and C, and packed with endorphins that help you feel good. They are economical too. A chilli bush bears so much fruit that two or three are all that’s needed for the average family. Of course, it is fun to grow a greater variety and, with a bit of research, one can select chillies for specific uses, such as Cayenne for drying, Jalapeno for poppers, baking and salsas, Poblano for roasting, and mild Anaheim for salads and stir-fries.There is always a whiff of danger around chillies. They are hot, they burn and they are tempting, with a glossy, red brilliance that says ‘eat me’! The name chili comes from the Aztecs, who cultivated them hundreds of years before they were introduced to the rest of the world. It’s no surprise then that this species is indigenous to Central America and remains an indispesible ingredient of Mexican food. Later it found its way to Asia and into our favourite Indian and Southeast Asian curries.

Chilli heat is rated according to the Scoville scale, and the higher the Scoville Heat Units (SHU) the hotter the chilli. An easy test is to cut o the tip of a chilli and taste it.

• Chillies are very easy to grow. They require ample sun and shelter from wind (so that the flowers don’t blow off).
• Soil should be well drained but moist, light and enriched with compost. Avoid manure as this may cause fruit to drop in the early stages.
• Water regularly, especially in hot weather, so that plants don’t wilt and drop their flowers.
• Chillies are frost tender and have a long growing season, so plant them out as early as you can, especially in areas that get frost in early May.

Most unusual heirloom varieties of chillies are only available in seed. There are a few tricks to successful sowing worth taking note of before you start.

Sow in seed trays using germinating mix, not seedling mix, which is too open. To make the perfect germinating mix, combine athird coarse river sand, a third vermiculite and a third sifted compost.

Curiously, the hotter the chilli, the higher the germinating temperature required (very hot chillies 32°C and hot chillies 20°C). Use a heating pad under the seed tray. A snake tank heating pad is ideal. Place the pad plastic side up and put the seed tray on two bricks, or a wire rack, so that it is about 10cm above the heat pad. Keep the soil moist, but not wet, during germination. Should the soil dry out, even for an hour, germination will fail. A watering can with a fine nozzle is recommended. Germination takes 2-4 weeks, with the hotter varieties taking longer. Chilli seed needs warm soil for successful germination. October and early November are the main sowing months for most areas, although subtropical KwaZulu-Natal and the Lowveld have two sowing windows: July to October and January to April.

Keep the seedlings in the tray until the first 2-4 true leaves develop. Drench once a week with a liquid fertiliser like Seagro or Nitrosol. To produce sturdy seedlings, brush your hand over the seedlings once a day. Seedlings should be ready for transplanting after six weeks. Boost growth by feeding weekly with a liquid fertiliser. When planting out, set plants a little deeper than they were in the seed tray. In very hot weather protect them with shade cloth until established.

Transplant the seedlings into moist garden soil that has been enriched with compost. Chillies like morning sun and afternoon shade or vice versa. Water continuously after transplanting and sprinkle half a teaspoon of Himalayan pink salt (available from supermarkets) around each plant a week after transplanting. Pink salt contains 81 trace elements.

Water the seedlings regularly and mulch the soil to retain moisture. Don’t water at night because this could encourage mildew. Treat mildew with a mixture of bicarbonate of soda, pink salt and water sprayed onto the leaves. Check that drainage is adequate. For red spider spray the leaves with an organic pesticide made from one heaped tablespoon of Diatomaceous Earth in a litre of water with a drop or two of dishwashing liquid.

Steer clear of nitrogen-rich fertiliser during the growing phase but supplement with compost tea/liquid fertiliser or potassium-rich fertiliser (3:1:5) when the fruit starts to form. Tip: Add microelements by sprinkling half a teaspoon of pink Himalayan rock salt around each plant

The heat increases as the chilli ripens. For less heat pick them green or as the colour is changing. Regular picking encourages the plant to continue flowering.

In hot, dry weather watch out for red spider and spray underneaththe leaves with an organic insect spray containing pyrethrum. Prevent fungal disease by watering during the day, not in the evening.

If you love spicy Mexican cuisine, you’ll probably already have a ‘Serrano’ or ‘Jalapeno’ chilli bush growing in your garden, but here are three other more unusual heirloom cultivars to try, all with strong Latin American associations too.

‘Chocolate Habanero’ has a very intense fruity flavour. A little bit goes a long way with this really hot chilli. This one is hotter than the traditional orange variety. It is a long-season pepper that needs a bit of heat to germinate.

‘Mayan Love Pepper’ is from South and Central America and was originally mixed with chocolate and used as an aphrodisiac in the local culture. This is a very productive variety and the bush is covered with hundreds of spicy fruits. It can be eaten green or ripe.

‘Peruvian White Habanero’ is actually a light yellow colour. It has the full fruitiness of a traditional ‘Habanero’ but not the excessive heat. It still packs a small amount of heat and is a great introduction to the wonderful world of tasting chillies.