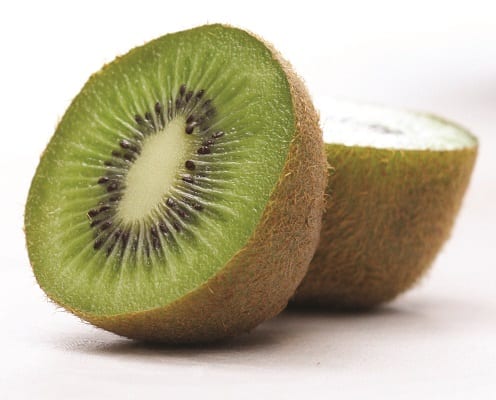 History
At least 300 years ago the Chinese were already cultivating ACTINIDIA deliciosa on a very small scale, yet much of the crop consumed there still comes from wild vines scattered over the Zhejiang counties. It was when seeds from China were taken to New Zealand in 1906 and the plants subsequently flourished there that commercial production of the fruit began. In 1962 New Zealand growers began marketing the fruit under the name ‘Kiwi fruit’ (sometimes ‘Kiwifruit’) in an attempt to give it greater market appeal. It is currently grown in many countries, including South Africa, where experimental plantings first began in 1960. Suitable climates Kiwi vines need temperatures of between 5 and 25°C for good fruiting, but they can survive temperatures of as low as -10°C while dormant. Open flowers must be protected from frost (use frost cover) and severe early frost will retard growth. Very high day temperatures can cause sunburn on fruits.

Cultivars
There are many cultivars available worldwide, but Hayward is the leading cultivar in New Zealand (where it was developed) and South Africa. It bears large fruit that stores well and has a superior flavour.

Propagation
It is not recommended that vines be grown from seed. Soft-wood cuttings are an option, but do not produce strong root systems. Some varieties, like Hayward, are propagated in vitro using vegetative buds of female plants. The best option for gardeners is to buy vines from a reputable nursery or grower. (Umkhombe Kiwi’s in the Cape sells vines to the public and the staff will help with growing tips too. Contact them on 021 874 1033 or e-mail: oscar@kiwifruit.co.za.)

Growing requirements
Kiwi fruit vines need deep, friable, fertile, free-draining soil to thrive. They can be planted in full sun or semi shade and need to be kept moist (but not waterlogged,
as this could lead to root rot). Mixing organic compost into the soil will improve growth, and then the vines should be given twice-yearly applications of fertilizer that is high in nitrogen (in early spring and summer). Vines should be protected from strong winds.

Growth habits
The vines require permanent supports and plenty of space to grow and can reach a height of up to 9 m. They can be grown horizontally or vertically, with guiding and pruning along a pergola an option. It is best to choose a strong main shoot and prune the side shoots in early summer to midsummer to divert energy from the leaves to the fruit. Every three years a good pruning of the side shoots will encourage new shoots to grow. The vines can become a tangled mess if not pruned regularly.

Pollination
The vines will begin to flower and bear fruit three to four years after planting. The vines are either female or male, so in order for pollination to occur at least one male is required for every five females. The vines generally flower in May and the male and female plants’ flowering times need to coincide, so some growers actually graft a branch of a male vine onto each female vine. The female flowers need to be pollinated by insects but the female flowers do not contain nectar so ‘persuading’ the insects to visit the female flowers can be difficult – in some commercial enterprises beehives are placed between the vines to improve pollination, while others pollinate the flowers artificially with pollen gathered from the male flowers.

Harvesting
The fruit ripens in November, and harvesting can start when the fruit begins to soften. It can be picked off the vine by hand, or clipped off, close to the base of each fruit. Firm fruit can be kept at room temperature for up to eight weeks. Ripe fruit will last for a week or more if kept in the refrigerator.

The fruit
Apart from simply eating the ripe kiwi fruit – by slicing them in half and scooping out the flesh with a spoon – they can be peeled and sliced and added to fruit salad. Kiwi fruit also makes a delicious filling for a cake, or a topping for ice cream. The fruit contains the proteolytic enzyme actinidin, which can aid digestion, but it is probably wise to avoid excessive consumption because little is known about the effects of this enzyme on the body. It can also be used as a meat tenderizer, but this should be limited to 10 minutes. The enzyme also curdles milk and yoghurt and prevents gelatine from setting unless the fruit is cooked first. Always peel the common varieties of kiwi fruit, otherwise the hairs on the skin can irritate the throat.

Kiwi fun
The Berry Kiwi Festival takes place from 19 to 21 March 2010 at Haenertsburg, Magoebaskloof, in the Limpopo Province. The festival will be a delicious feast of
berry and kiwi tasting. Activities include an Easter treasure hunt for children, sunset cruises on the Ebenezer Dam, farm tours, cheese-making tours, essential oil
factory tours, a cooking competition and plenty of restaurants, stalls and a nursery. Contact Linda Miller on 082 575 5738 or email: applegrange@mweb.co.za for more information.

Interesting fact
Gold kiwi fruit, which has sweeter, less acidic, yellow-coloured flesh, is the latest cultivar to be introduced from New Zealand. It was developed during eleven years of cross-pollination and grafting of other cultivars. The skin is less hairy than its counterparts and the fruit can be eaten whole.