Home » Grow to eat » The Madumbe: the potato of the tropics 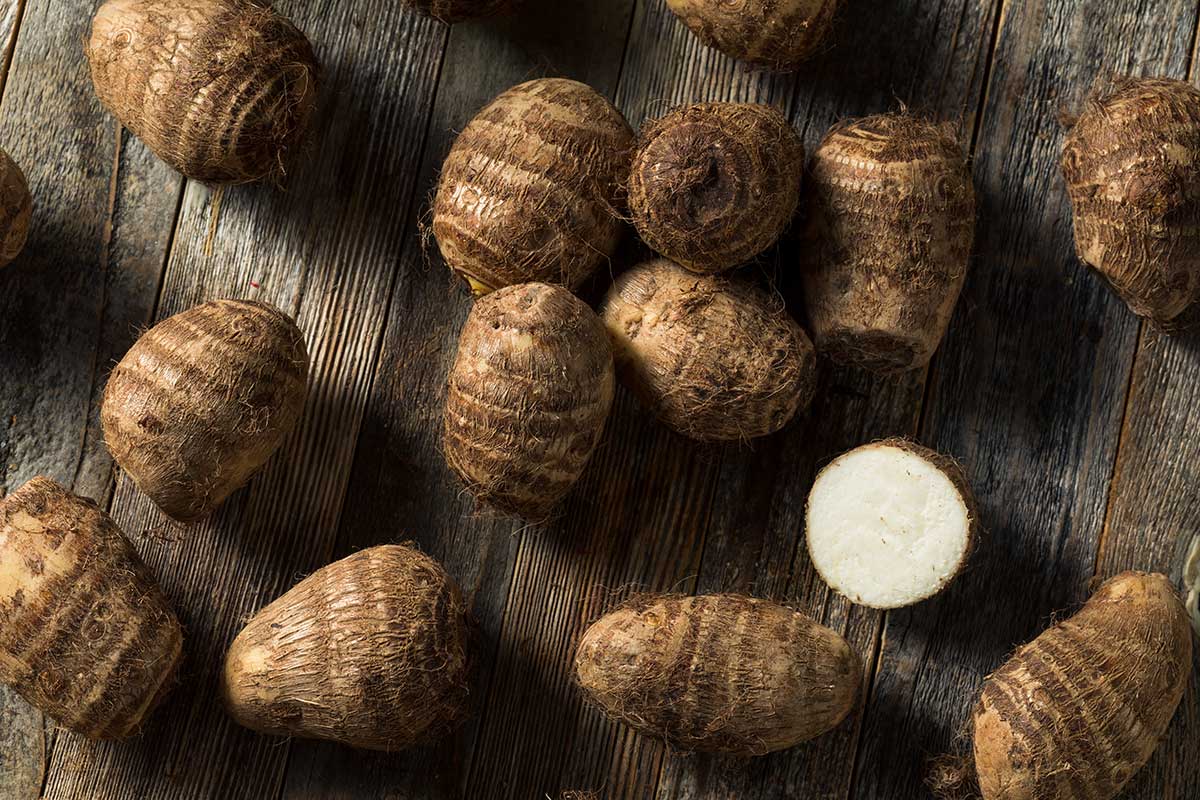 The Madumbe: the potato of the tropics

Growing in popularity, the madumbe is a healthy alternative to the potato, traditional or sweet.

Depending on who you ask and where you read, the madumbe is either indigenous to South Africa or was introduced in the 1500s and has become naturalised. (We tend to go with the latter theory.) Apparently it is one of the oldest food crops in the world, having been farmed for close to 7000 years.

While it has been grown for centuries throughout the western parts of the country, it wasn’t until recently that it became readily available from supermarkets. These days, though, you can buy it anywhere from Woolworths to Checkers, and there’s a good chance that those root tubers you buy can be planted for a healthy crop of your own.

The tubers themselves are brown and oval in shape, with a rough, husky sort of skin. Cut open, the flesh is white or pink, and starchy. The plant is fleshy and very tropical in appearance, closely resembling the elephant ear with huge, heart-shaped leaves.

How to grow the madumbe

The madumbe (also called taro in certain parts of the world) is a tough perennial plant that is grown from tubers in the hotter months, although in tropical areas it can grow all-year round. It can reach 1m in height and should be spaced about 60cm apart.

Plant the tubers just below the soil’s surface with the growing tip pointing up, in heavy, compost-rich soil and in full sun to semi-shade. Watering is key, and it is hard to overwater madumbes. Feed the plants regularly with a slow-release fertiliser – at least 3 times during the growing season. Harvesting occurs in autumn once the leaves have turned yellow and are dying back. When this happens, lift the tubers with a fork. They can be stored for a few months in a cool, dark, well-ventilated place. Basically, store them as you would potatoes.

The whole madumbe plant can be eaten, but all parts must be cooked first as the plant contains a chemical (calcium oxalate) that is toxic and can irritate the mouth and throat. Young leaves can be boiled and eaten like spinach, while the tubers can be cooked as you would a potato – fried as chips, boiled and mashed, steamed, baked, roasted or even stir-fried. Peel off the skin of the tubers before eating, as they are quite tough.

The madumbe is actually much healthier than just about every other root veggie. It has high levels of protein (up to 9%, as opposed to the 1.9% and 1.7% of potatoes and sweet potatoes respectively), it is high in fibre, it contains manganese, phosphorous, copper, magnesium and potassium, and has high levels of vitamins C, E and B6. Because it is a low-GI carbohydrate, it is good for sugar levels, could reduce the risk of heart disease, and has compounds called polyphenols, which help to reduce the risk of cancer. Eating madumbes is also good for your gut health as it is a good prebiotic, and the high fibre levels make it a good weight control food.