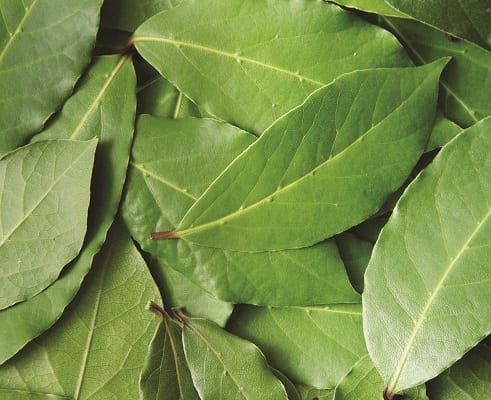 Bay, the noblest of leaves

It may come as a surprise, but sweet bay (Laurus nobilis) has a long association with December festivities, even predating Christmas. In Roman times branches of bay were used to decorate homes during the festival of Saturnalia in mid-December, coinciding with the winter solstice. Bay leaves werealso burnt as a sacrifice to Apollo and Aesculapius, who oversaw medicine and healing. With Christianity, the evergreen bay tree was adopted as symbol of eternal life, and branches decorated churches and homes at Christmas time. The Christmas wreath of bay leaves also comes from this time, although it also has even earlier associations. In ancient Greece the laurel (another name for bay) wreath was a symbol of high status and was presented to winning athletes in honour of Apollo. Later, the Romans used it as a symbol of victory. On a practical level, bay leaves are the perfect herb for helping to digest rich Christmas meals. Bay leaves stimulate the secretion of digestive juices, which aids digestion, helping to break down heavy food, especially meat.

GROWING GUIDELINES
Bay can be grown as a clipped evergreen shrub or allowed to mature to a tree of up to 20 m in height. Growth is slow, so if you don’t plan to be in the same home for the next 20 years or so, rather plant it in a large container so that it can move with you. Bay likes well-drained but moist soil and grows in sun to semi-shade. It grows well in containers, and in winter these should be moved into an area that is protected from frost. Should a bay tree be affected by frost, wait until the new growth sprouts in spring before pruning. Fresh bay leaves can be harvested all year round. Be warned! In Roman times the sudden withering of a bay tree spelled disaster for a family.

LOCAL IS LEKKER
Bay might be a Mediterranean herb, but it is inextricably linked to our own diverse and colourful culinary tradition. What would Malay food, especially bobotie, be without bay leaves? Or venison, for that matter. Bay adds a deep, spicy note to slow-cooked red meat dishes, whether game or beef, as well as to marinades for fish and chicken on the braai. Bay leaves should always be removed before serving.

THE FRENCH CONNECTION
Bay leaves are used to flavour many classic French dishes, like Boeuf à la bourguignonne, Daube de Boeuf Provençale, and pâtés. It is the main component of the bouquet garni, a posy of sprigs of parsley, thyme and bay, tied together and added to soups, stews and casseroles, but removed before serving. The French also add a bay leaf when poaching salmon and infuse milk or stock with a leaf when making a roux-based sauce.

FRESH OR DRY
Opinions differ. Some cooks love to use fresh bay leaves while others find them too bitter. Drying reduces the bitterness, which is why this is how bay leaves are traditionally used. There is also the opinion that the flavour is more pronounced when the leaves are dried. There may be other reasons for drying the leaves, though. Bay trees grow slowly and don’t like the cold, so drying the leaves could have been the best way for cooks in colder European countries to ensure their availability throughout the year.

TRY THIS
To release more flavour, crush the leaves and put them in a muslin bag and add it to the soup or stew. Remove the bag before serving.

MYTHS AND MADNESS
For centuries there have been many superstitions around the power of bay:
• Keeping a bay leaf in your mouth prevents misfortune. (This is possibly because it’s hard to talk, which keeps one out of trouble!)
• A laurel wreath worn on the head may be a precaution against lightning strikes. According to British herbalist Nicholas Culpepper, “Neither witch nor devil, thunder nor lightning, will hurt a man in a place where a bay tree is”.
• Bay trees purify the air. During a time of plague, Roman emperor Claudius moved his court to Laurentum, where bay trees grew

HEALING POWER OF BAY
Although bay is primarily a culinary herb, it has a long history of healing, specifically easing arthritic aches and pains, and improving digestion. A decoction of leaves added to bathwater helps to ease aching joints. Boil one-third leaves to two-thirds water in a pot and add to the bathwater. Alternatively, dilute bay essential oil with carrier oil and rub into sore muscles. Applying a poultice of bay leaves can relieve wasp and bee stings. An infusion of bay leaves has a warming and tonic effect on the stomach and bladder, settling uneasy stomachs and even stimulating the appetite. Drink one cup three times a day.

HOW TO DRY YOUR OWN BAY LEAVES
Dr y the leaves immediately after picking, without exposing them to sunlight. Lay the leaves on a drying frame or paper in a cool, dry room. When the leaves are crisp (which should take about three weeks) they can be stored in a paper bag or sealed container. Dried leaves start to lose their flavour after a year or so