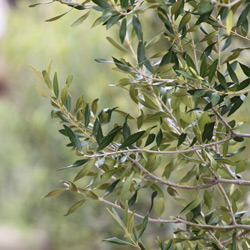 An olive, to many, is no more than a humble lump at the bottom of a martini… Olives have oiled the wheels of civilization since Jericho built walls and ancient Greece was the morning news. From the first Egyptians, they (olives) have symbolised everything happy and holy in the Mediterranean. But it is simpler than all that. Next time the sun is bright and the tomatoes are ripe, take a hunk of bread, sprinkle it with fresh thyme, and think about where to dunk it. I rest my case. – Mort Rosenblum, in his book: Olives. The Life and Lore of a Noble Fruit

The cultivated olive, Olea europaea, is the only member of the family Oleaceae that produces edible fruit. Its origins are unclear but it has been a part of our lives for millennia. There are a number of references to olives and olive trees in the Bible – the twig carried by Noah’s dove at the end of the flood was from an olive tree. We also know from the entry in Jan van Riebeeck’s diary on 18 July 1661 that olive trees were already growing successfully on the farm Boschheuvel in the Cape.

Today more and more people are trying olive oil, enjoying the flavour and including it in their cooking. This increasing popularity has much to do with the results of research conducted on its nutritional value. One of the best sources of monounsaturated fatty acids, it drives off the bad cholesterol without reducing the good. Unlike animal fat, its consumption is not linked to an increased risk of cancer – in fact evidence seems to show that it wards off certain cancers. Further, it aids digestion, appears to help children grow and is believed to retard ageing in the bones, joints and skin.

Olives are evergreen trees with a spread of 7 – 9m and a height of 9 – 12m, and in the sunlight the leathery, grey-green leaves take on a silvery tinge. Olive trees have the ability to survive highly unfavourable, semi-arid conditions and are capable of living longer than a thousand years.

They can be grown in containers and its neat growth pattern makes them ideal for small gardens.

There are at least seven hundred cultivars of O. europaea, each producing a slightly different fruit and varying in their growth habits and vigour. Here in South Africa the cultivar named ‘Mission’ is by far the most popular, basically due to its ability to produce fruit under a wide range of conditions. It is a prolific bearer but has a tendency to alternate a good crop with a poor one. So far it is also the most suitable cultivar for black table olives, and when the fruits are processed correctly one gets a good quality product.

Site and planting for olives

Olive trees will grow in a wide range of soils but low to medium fertility is preferable because soil that is very fertile is likely to result in excessive vegetative growth. Olives grow well in alkaline soils, including those with a high level of salts, provided that the pH level does not exceed 8.5.

Regardless of the exact soil type, the site must have good drainage. The usual planting distance between trees varies from 7m – 12m depending on the shape of the cultivar. An ‘olive climate’ is characterised by mild winters during which the mean monthly temperature never falls below -3˚C, and the summers are dry and hot with the mean monthly temperature never above 30˚C.

Nutrition and routine care of olives

Top-dress the soil with a general-purpose fertiliser with medium to high levels of nitrogen at a yearly rate of about 500g – 1kg per tree, applied in two or three doses when the trees are in active growth. Water the trees regularly during dry periods, particularly for the first two or three years after planting. In spring, growers traditionally dig around their trees to the width of the crown. This aerates the soil, gets rid of weeds and helps water to penetrate.

Pruning and development of olives

Prune newly planted olive trees by removing the leading shoot when each tree is about 1.5m tall, and leaving three or four strong laterals to provide the basic framework. Trees start to bear olives in their third to fourth years, and the fruit appears only on two-year-old wood.

In spring the buds sprout and by winter they have grown into long, slender twigs, then cold weather triggers a process that results in tiny, delicate, multi-petalled white blossoms covering these twigs in spring. Generally, the flowers are wind pollinated with most olive varieties being self-pollinating, but fruit set is usually improved by cross pollination with other varieties. Most of the flowers are blown off by wind or knocked off by rain – those that remain turn into little green olives by late summer.

These young branches will produce buds for new wood but they will not flower again, so to retain each tree’s shape, prune back the branches that have given you fruit. Also remove cross branches that rub against others in the wind, along with old wood that has lost its vitality and the shoots that grow around the trunk base.

Olives are processed to remove their bitterness. Fruits used for fermenting should be harvested when they are fully ripe but still green. Olives for eating without being processed may be harvested when black and firm and then packed in dry salt. When thoroughly dehydrated by the salt the olives are stored in oil. Fruits that are required for oil production should be left on the tree until fully ripe.