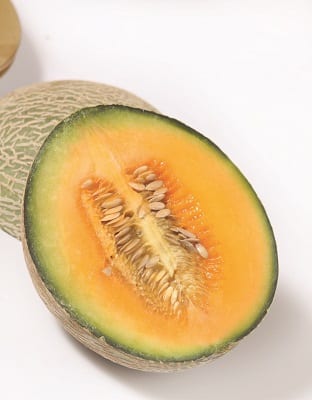 Known as cantaloupe in much of the world, here the sweet melon is generally referred to as spanspek by English and Afrikaans speakers alike. Apparently the name arose in the Cape – the tale goes that Lady Juana Maria de los Dolores de Léon Smith, the Spanish wife of Sir Harry Smith (Governor of the Cape Colony from 1847 to 1852), ate melon for breakfast every day, while Sir Harry ate bacon. The Malay staff serving the household referred to the melon as ‘die Spaanse dame sespek’, a name that was shortened to spanspek. Being a member of the Cucurbitaceae family, the sweet melon grows easily and sends out runners across the soil, like pumpkin and watermelon, but it does not take up as much space as them. The leaves look like outspread hands and are smaller than those of most other squashes; they are not quite as sensitive to powdery mildew nor as easily damaged. Traditionally spanspek are grown in the vegetable garden because of their spreading growth, but there is no reason why you can’t train them up a frame or trellis. As melons go, spanspek is quite a quick crop. From seed sown in September you can expect to enjoy the first spanspek in December just in time for Christmas. The bonus of growing your own spanspek is that you don’t have to dither around the veggie stand at the shop, sniffing and feeling the fruit, wondering whether it is ripe or not. Often it is not and it is very disappointing to open the fruit and find that the flesh is pale and tasteless.

WHEN TO SOW
Depending on the temperatures in your area and when the last frost is expected, the first batch of melon seed can be sown in September, with successive sowings at three weekly intervals through to December. In areas that are colder for longer, sow seed in pots and keep them in a warm, sheltered place. Transplant the seedlings when the first proper leaf of each is fully formed. As with other cucurbits, the melons that are sown early and complete most of their growing before the intense heat and rains will be less troubled by powdery mildew.

BASIC REQUIREMENTS
Spanspek likes a lot of sun and should be grown in good, compost-enriched soil that drains well. Bone meal can also be applied during bed preparation. If you plan to train the plant up a trellis or some other form of vertical support, then make sure the position is sheltered from the wind, to prevent damage to the leaves and fruit

SOWING GUIDELINE
When sowing seed in situ, allow 50 to 60 cm between plants and allow each plant about one square metre of growing space. A small garden should be able to accommodate one or two plants, which can be trained up a trellis or allowed to spread. Although germination rates are good, plant two to three seeds together. Once they have germinated keep the strongest plant. The other two can be transplanted or simply cut off at ground level. During earlier sowings when the ground is still cold, the planting depth can be relatively shallow (15 to 20 mm) but as the soil warms up this can increase to 25 mm. Don’t over water during the germination period as the plants seem to be very sensitive to excessive water.

GROWING ON
As mentioned previously, where space is limited the plants can be trained up a support. The moment the shoots start to run, they should be tied onto a wire or trellis. Don’t delay because the runners quickly become brittle and can be damaged rather easily. Once the fruit starts to form it must also be supported because the mature melon can weigh up to 1, 5 kg; save the bags in which oranges and onions are sold for this purpose. Slip a bag over each melon and tie the bag onto the wire or trellis. (Make sure there is enough room for the fruit to swell and mature.) The plants should not be allowed to dry out, and additional care must be taken when they are flowering, because the flowers will drop if the plants dry out. When watering, don’t wet the leaves – flood watering is preferable to sprinklers. A layer of mulch will keep the leaves off the wet ground and later that mulch will also prevent the fruit from rotting. Feed and mulch before the plants spread too much so that there is no danger of bruising the leaves. Use an organic 3:1:5 fertiliser, or a liquid feed for fruit and flowers. The liquid fertiliser should be applied around the base of the plant.

SETTING FRUIT AND HARVESTING
Once a melon has formed on a runner it is the norm to remove any other fruits that develop on that runner. Leaving more than one fruit on any runner affects the quality, size and flavour of each melon, but if you are growing the plant upwards, it might not be a bad idea to have smaller fruit. It could also be an interesting experiment to remove excess fruit from one plant and leave the fruit on another to see the difference. There is a simple way of judging when a melon is ripe. At the point where the stem joins the fruit a small green cap is formed that is about the size of a 10 cent piece. When the fruit is ready for harvest you will often find a crack around this green cap at the stem, where it almost separates from the fruit. This is called ‘slip’. Another indication that the fruit is ripe is when the tendril on the opposite side of the stem starts to die back.

PESTS AND DISEASES
• Powdery mildew is most likely to appear during hot, humid weather. If it occurs use a copper-based fungicide. The best way to prevent mildew is to make sure that the plants are well spaced so that there is plenty of air movement, and to avoid wetting the leaves when watering.
• Aphids can be a problem and although they should not affect the performance of the plant can be carriers of the mosaic virus. Control them with an organic insecticide.

In Greek mythology, when they referred to the ‘nectar of the gods’ could they have been speaking about spanspek? There’s a special sweetness, juiciness and fragrance to this rough-skinned melon that sets it apart from other sweet melons