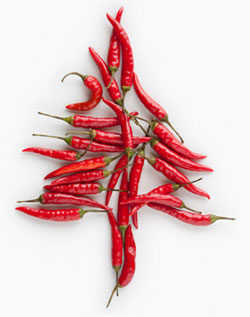 Early December presents the last chance in the season to plant both the hot and the sweet capsicums, so whether your taste tends towards hot and fiery or sweet and crunchy start sowing them now.
There is a misconception that it is hard to grow capsicums, but the reason for this is mainly that the seeds can take a long time to germinate – sometimes up to three weeks. The secret to growing them is to be patient and not give in to despair when nothing seems to be happening.
Besides teaching patience, these plants also require that the one tending them strikes a fine balance when it comes to watering. If the soil is consistently wet during the early stages of growth then damping off can occur; this is what made it so difficult to grow chillies two years ago when non-stop rain waterlogged the soil. Checking with the experts it seems that capsicums like to be well watered, but then the soil should be on the point of drying out before the next watering. Watering is also critical when the plants are flowering; if they wilt at this stage then they drop their flowers and without flowers there will be no fruit. But what is a little bit of vigilance compared to the rewards of healthy plants carrying gorgeous, glossy fruits? For chilli lovers there is nothing nicer than being able to cultivate particular varieties that suit the palate in terms of heat or flavour. Of course along with chilli peppers (hot chillies), sweet peppers are worth growing too, not least because they tend to be high priced items in the supermarket.

Another point in their favour is that capsicums are outstanding container plants and often do better in pots, mainly because it is easier to look after them. December is a critical month in the year for sowing capsicums because they are a long crop. Generally they can be sown from August in warm frost free areas through to the end of November or early December. Planting them any later could mean you risk losing most of your harvest.

Capsicums need friable, fertile soil that drains well and does not become waterlogged. Enrich the soil with lots of compost and dig the ground over fairly deeply (at least 40 cm deep) because capsicums have quite extensive roots.
In cooler areas capsicums can be planted in full sun but in hot areas, including the Highveld, they do best with morning sun and some shade in the afternoon. In other words, put them in the best spot in the vegetable garden. The area should also be sheltered from wind so that the flowers are not in danger of being blown off.
If you opt to grow capsicums in containers then make sure they are deep and wide enough. For a well balanced potting mix that drains well but also allows air to reach the roots, make up a fifty-fifty mix of commercial potting soil and palm peat and add a controlled release fertiliser at the recommended dose.
Sowing and spacing

Use fresh capsicum seed because seed does not stay viable for long. The germination period varies from variety to variety so check the information on the back of the seed packet. Seed is best sown into small (10 cm) pots and the resulting seedlings allowed to grow into fairly sturdy plants before being transplanted into a bigger pot or into the ground. If the pots have been used before then wash them out with an outdoor disinfectant (such as Jeyes Fluid) to ensure they are free of fungal spores because capsicums are susceptible to damping off. Also make sure the potting soil is clean and sterile.
Plant two to three seeds per pot and after they have germinated keep only the strongest looking seedling, cutting off the two weaker plants at ground level. This method is better than using seedling trays, which requires pricking out the seedlings for transplanting.
Because of the expected levels of heat in December it is best to germinate the plants in complete shade. This can be under a roof outdoors, or even indoors on the kitchen windowsill. Once the seed has germinated move the young seedlings outdoors and harden them off by gradually exposing them to light and sunshine. If the seedlings are not taken outdoors for hardening off they can become leggy. Germinating the seed in pots on the kitchen windowsill will make it easier to look after them and keep the moisture level of the soil correct.
When planting out the seedlings, the seed packets will give the recommended spacing between plants. It depends on the variety and the general rule is that the smaller the fruit the smaller the plant.
Growing on

Mulch the plants after setting them out in the soil. A 5 to 10 cm layer of mulch keeps the roots cool and encourages microbial activity, which keeps the soil healthy. If there is extreme heat in January and February, plants can be protected with 30% shade cloth. Just make a temporary structure that allows easy access to the plants. Practise the ‘just in time’ watering principle: if the soil feels damp then delay watering by another day, however, when the plants start to flower then watch the soil even more carefully, and water before they have a chance to wilt.
If there is a threat of prolonged rain, or excessive rain, then keep the rain at bay by covering the soil with black plastic bags. Remove the bags as soon as the rain stops.
Feed the plants regularly with liquid fertiliser until they start flowering and then, if you are growing chilli peppers, reduce the frequency or stop, unless the leaves turn yellow as this indicates a nutritional deficiency. Chilli peppers don’t use a lot of nutrients once they start fruiting, however, sweet peppers have higher nutritional requirements because they produce bigger fruit, so fertilise the sweet peppers more often than the chillies.
Pests

Pests are not generally a problem. An infestation of aphids should not affect the growth or fruit and can be removed with soapy water or a jet of water. In hot and dry conditions watch out for red spider. Should a plant become badly affected it is better to remove the plant and destroy it.
Harvesting

When it comes to harvesting there are some tricks you can use to get more chillies from your bush. Do not pick the first chilli that starts ripening (changing from green to red, also called ‘turning’) as allowing it to remain on the bush will let you see what size the fully mature fruit will be, as this can vary from season to season. Once the size of the mature fruit is established, pick some of the turning fruit, while leaving the rest to ripen fully. Picking on a continuous basis sends a message to the plant that it needs to keep on producing flowers and fruit.
Sweet green peppers can be picked green or some can also be left to turn red. This can take a long time but is worth it because the fruit is much sweeter. Alternatively use seed varieties that change colour quickly although the seed will be more expensive than the normal green pepper.
Using peppers

Sweet peppers are best used immediately. They can be used fresh in salads, or roasted, or used in stir fries. The general rule for chilli peppers (chillies) is that the smaller the fruit the more pungent it is. Be careful when handling chillies: don’t touch your eyes or mouth and keep them away from children. It’s a good idea to have a separate chopping board because the juices stay in the board and can affect other foods. To reduce the pungency of chillies remove the seeds and white membrane and use only the flesh. Chillies dry well – string them together and hang them in a cool dark room. Keep them whole and only crush when using. Use chillies to flavour oil and make chilli sauces that can be frozen. Freeze whole chillies by storing them in a plastic bag in the freezer. Defrost the fruit by putting it in a cup and pouring boiling water over it. If anything, their burn will be even stronger.
Information supplied by Di-Di Hoffman of Bouquet Garni Nursery.