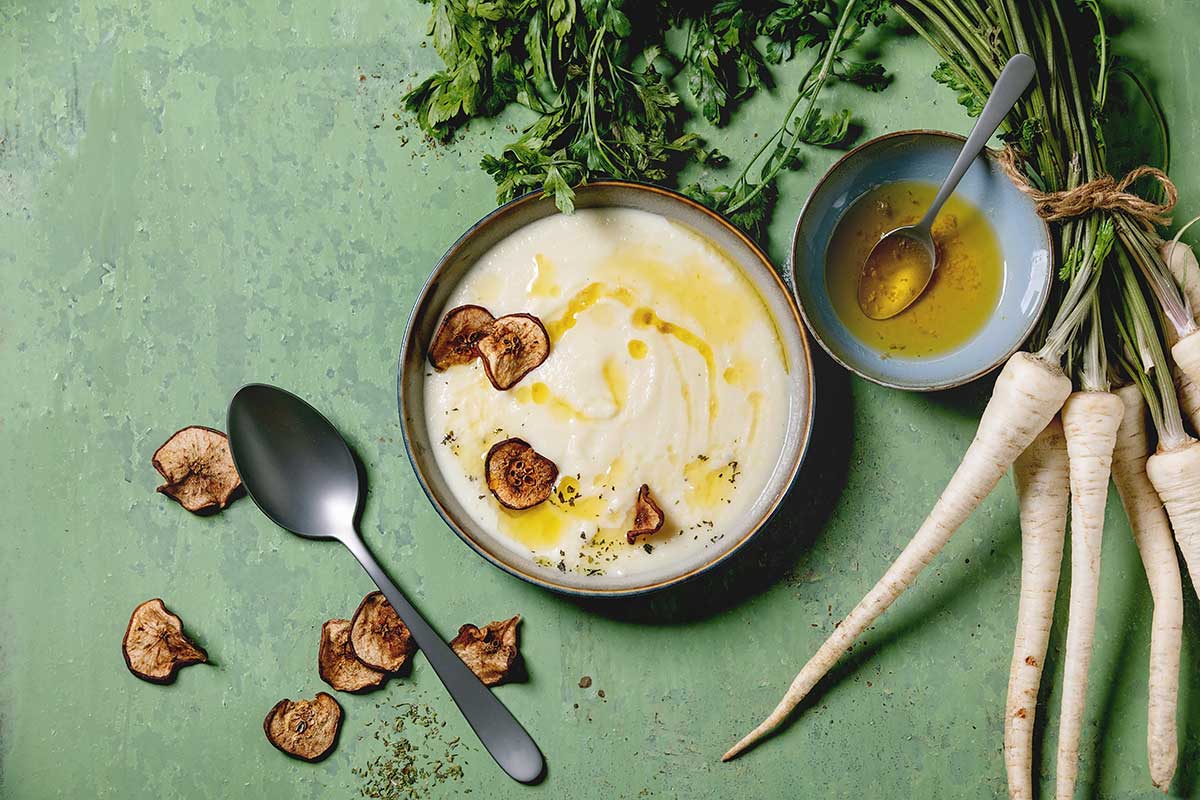 Soup is winter’s best treat, and whether you like your soup thick and chunky, consommé or as a tangy Asian broth, vegetables form the base of all good soups.

So why not plant a soup garden? Many of the veggies we sow for autumn and winter are perfect for soup. They are full of nutrients, especially vitamin C, as well as fibre, and they favour long, slow cooking. What’s more, there is enough of a variety for different flavours, colours and textures. The three main veggie groups for soup are roots (carrots, parsnips, turnips), the onion family (onions, spring onions, leeks) and greens (kale, spinach, cabbage, bok choy).

When you plant a soup garden sow both fast and slow growers for a continuous supply of soup veggies. For instance, spring onions as well as conventional onions, or Chinese cabbage in addition to large-head cabbages. Others like kale can be harvested from autumn right through to spring. It is also a good idea to grow a selection of herbs for added flavouring, such as oregano, flat-leaf Italian parsley, chives and garlic chives, thyme, sage and bay leaf.

Getting the basics right when you plant a soup garden

For the best yields and healthy growth, autumn and winter veggies need at least six hours of full sun a day and regular watering so that the soil stays moist.

A good harvest of parsnips can make a batch of soup that will last 3 months in the freezer. Add garlic cloves to a pan with a little olive oil and heat. Add 600g cubed parsnips, salt and pepper and a litre of stock. Simmer for 15 minutes or until the parsnips are tender and then blend until smooth. Add 200ml cream and heat. Serve with parsnip crisps. For the crisps use a potato peeler to make strips of parsnip. Place on a baking tray and season with salt and pepper. Bake for 10 –15 minutes until they start browning on the edges. As they cool, they will crisp.

Good to know when you plant a soup garden

Carrots produce the best roots in light, airy soil. Add sand and even some peat moss if the soil is heavy, or grow carrots in a deep pot filled with potting soil. When preparing the soil, dig deep! Water daily during germination because carrots prefer a moist seedbed. For good-size carrots it is essential to thin out the rows. Snip off, rather than pull out, the unwanted plants. Why not sow a seed packet of mixed colours for a surprise each time you harvest?

Parsnips can be sweeter than carrots, especially after frost, which converts much of the starch to sugars and helps develop long, narrow and firm parsnips. They also need very deep, fine soil. Their seeds are large enough to plant one at a time in a drill. They grow vigorously and are very frost hardy. Parsnips sown in April will be ready for harvesting in August. The roots are generally harvested when they reach 15 – 20cm in length. Don’t pull them out like carrots but gently fork them out of the ground so that the roots are not damaged.

Turnips are cold hardy and have two sowing periods, from February to April and from July to September. They do best in a loamy soil to which some lime and aged compost has be added, but not fresh manure. Turnips need to grow quickly, and if growth is slow, give a side dressing of superphosphate. Turnips are at their best if harvested before they are fully grown: pull when they are the size of a hen’s egg.

Spring onions are the fastest onion crop and can be sown almost all year round. To harvest, pull up a clump, and replant a few from the clump about 7cm apart. This spreads out the supply. Alternatively, normal onions can be harvested in the green stage when they reach edible size. Remove the largest plants each time. Leave a balance of plants to mature for later in the season. There is no need to twiddle your thumbs while waiting for the traditional large-head cabbages, which take up to 120 days to harvest.

Chinese cabbage like pak choi (also known as bok choy) can be harvested from 30 days (baby leaves) or 60 days for mature leaves. Baby cabbages are generally ready to harvest within 55 – 65 days from planting. The heirloom Chinese cabbage ‘Michilli’ is normally ready between 80 – 90 days. ‘Michilli’ has the flavour of cabbage with the texture of lettuce. Use it for soups as well as in salads.

Kale is the all-time easiest to grow, is quick to harvest and the most flavourful brassica for soups. It is not bothered by aphids during winter, and the colder it is, the sweeter and nuttier the flavour. Besides the tall-growing kale (leaves picked from the bottom upwards), newer varieties are compact and leafier. Like Swiss chard, pick the outer, young leaves. Kale likes slightly acidic soil, and full sun or partial shade.