Home » Grow to eat » Radish With a Difference 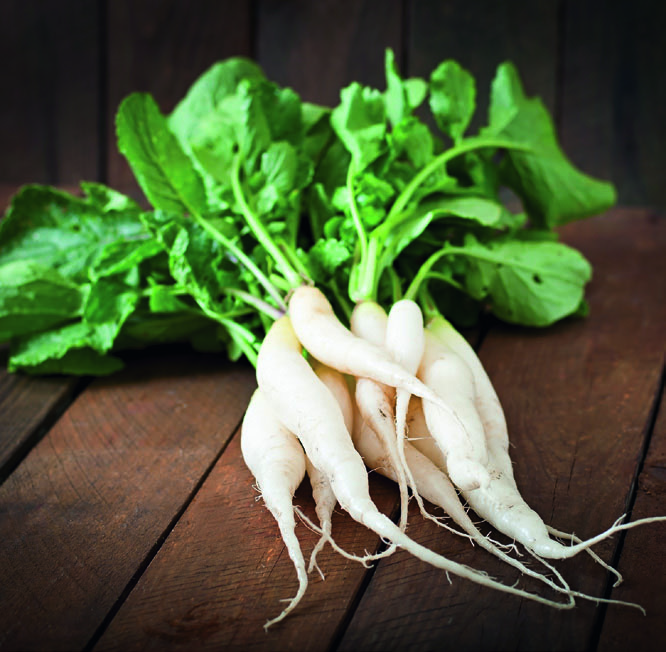 Radish With a Difference

Radish With a Difference

Radishes are a quick and easy spring crop, and there is a new Asian variety that is just as easy to grow but looks completely different. It is creamy-white, and much larger, rather like a type of stubby carrot, anything from 25 – 80cm long. The other difference is that it has a mild, sweet radish flavour, unlike the more peppery pink and white radish that is commonly grown. Daikon (Raphanus sativus var. longipinnatus) is a variety of radish that means ‘big root’ in Japanese. It’s a common ingredient in kimchi, the fermented vegetable dish that is a staple of Korean cuisine, but that is by no means its’ only culinary application. The crisp and juicy texture makes it a great addition to salads – thinly sliced, cubed or grated. Use it as a stir fry vegetable or in vegetable bakes. When cooked, it tastes a lot like turnip. The young leaves can be eaten too and the seeds sprouted for adding to salads and sandwiches. Living Seeds has two daikon varieties available. The sprouting variety, which can also be grown as a microgreen, has a strong, hot radish flavour. As a sprout, it will be ready to eat in three days, and as a microgreen it can be harvested at seven days. Because this variety has such a strong taste it is not recommended for growing on; the flavour becomes extremely pungent the more the root develops. The variety that is recommended for growing into a mature radish is ‘Hong Vit’. It develops a root 25 – 30cm long, with the milder flavour associated with most daikon radishes. Being a much larger vegetable, don’t sow as thickly as you would other radish varieties. Planting 3 – 5 seeds every two weeks during the sowing season should supply more than enough for a family’s needs.

Growing daikon radishes:
● Sow from August to November and from March to May. It’s a cool-season vegetable that tends to bolt or flower early in hot weather.
● Sow seed directly into composted soil that drains well. The best position is a bed that receives at least six hours of direct sun. Don’t let the soil dry out during germination, which should take five days.
● Space plants 15cm apart. They can be grown alongside chervil, lettuce, spinach, strawberries and tomatoes.
● The radishes should be ready for harvesting within eight weeks. The flavour is best when it is the size of a large carrot. If left for too long in the soil, its flavour isn’t as good. Remove carefully from the soil because the root can be brittle.
● To store, cut off the leaves, wash and dry the root and store in the refrigerator. It will stay fresh for a few weeks.

Health benefits:
Besides being a low-calorie food that is high in fibre, daikon is valued for its ability to improve digestion because of an enzyme called diastase, which helps relieve indigestion and heartburn. Nutritionally, daikon contains significant amounts of potassium, vitamin C and phosphorus while its leaves are rich in vitamin A and C (higher levels than the root). They also provide beta-carotene, sodium, iron, phosphorus and calcium.