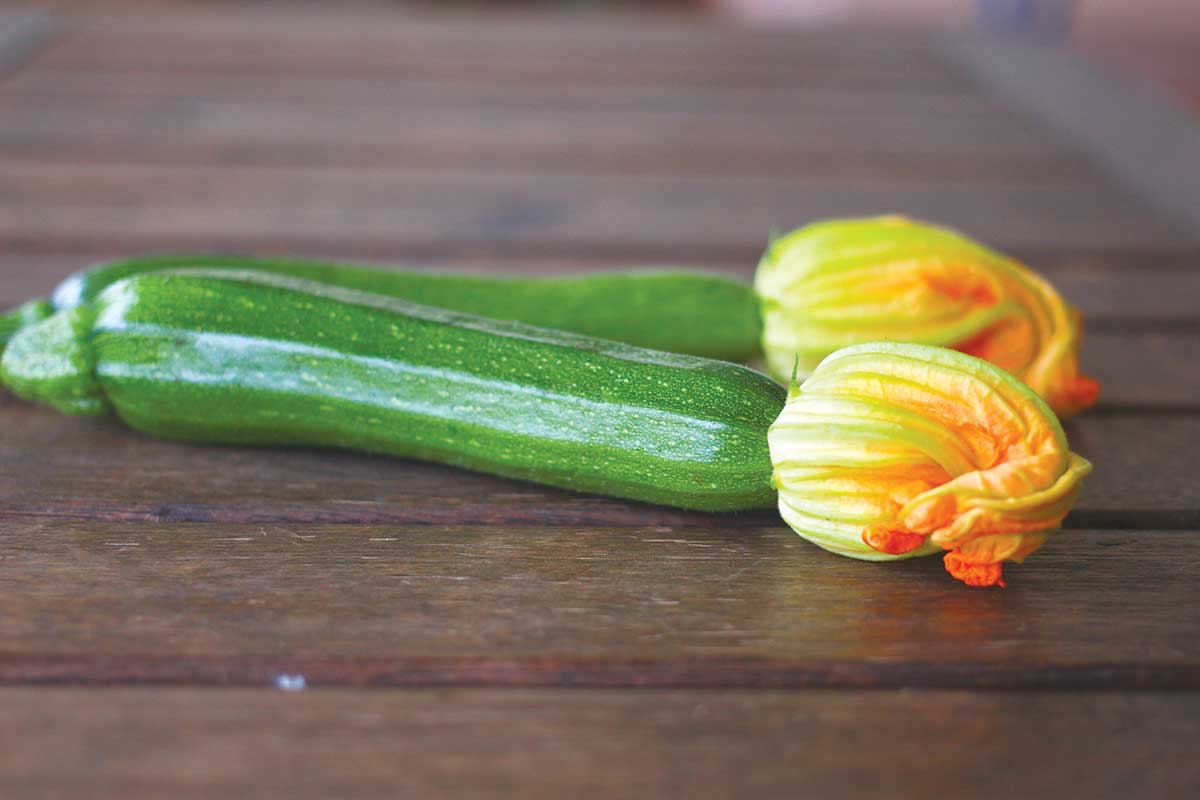 The zucchini, also known as baby marrow or courgette, is the most rewarding plant for the home veggie gardener to grow, especially for beginners.

Seed germinates easily, the first fruit is ready for picking within 65 days of sowing, and the plant itself is very attractive with big hairy green leaves and an abundance of yellow edible flowers.

Although each plant needs about 1m² of space for growing, this is far less than other creeping or trailing squashes, which makes it a better option for small vegetable gardens.

The yield is regular and prolific, so a small family could easily have their needs met by just two plants.

Another nice thing about baby marrows is their versatility. They are lovely and crunchy when eaten raw, or can be cooked in each and every possible way with other ingredients or as a vegetable on their own.

It is one of those staple summer vegetables that you should never be without. Being low in saturated fat and cholesterol, it is an excellent vegetable for low-fat diets, although there is a relatively high sodium content. It is a good source of the B vitamins as well as dietary fibre, vitamin A, vitamin C, vitamin K and various minerals.

When to sow the zucchini

In warm, frost-free areas seed can be sown in August, but later in cooler areas where there may be a late frost or a cold snap. For an early start sow seed in 10cm pots and keep them in a sunny, sheltered place. By the time the plants are ready for planting out (about 4 weeks) the weather should have warmed up sufficiently.

The earlier you can get the crop going the better, because the plants tend to suffer from mildew during the rainy season. This shortens their productive life span unless you can control the mildew.

In most areas the sowing window for baby marrows is August to November, except for the Lowveld and KZN coast, where the sowing season is from February to August.

Full sun and well-composted soil that drains well suits the cultivation of baby marrows. An area where there is good air movement helps, especially to dry off the leaves quickly after watering or rainfall.

Provide space for growing so that there is good airflow around the leaves.

Plant seed 7cm deep with two seeds per hole for in situ planting, but one seed per pot. Once the seeds have one true leaf cut off the weaker seedling at ground level rather than pulling it out. Individual seeds should be spaced 50cm – 1m apart, and rows 1m – 1.5m apart. Keep the soil moist but don’t water heavily until the seed has sprouted.

Don’t plant too close together because the leaves can create a humid microclimate that makes them susceptible to disease. Most baby marrows are bushy plants that only require a little support, but there are some trailing varieties that can be grown up a trellis or teepee.

Baby marrow plants consist of a single thick stem with leaves, flowers and fruit borne off the stem. The first flowers are usually male and will not produce fruit. A female flower has a small swelling at its base, while a male flower does not. Male flowers can be picked for eating and they are the nicest of all the squash flowers.

Because of their shallow root system, the plants need plenty of water and are drought sensitive. They will not flower if there is not enough water, which affects the harvest. The method of watering is very important. Water the plants deeply around the base and not from above so that the leaves remain dry. If they get wet they become susceptible to mildew. A mulch of straw around the plant should help to keep the leaves off the moist soil.

As the plant grows, the thickened stem can be slightly supported so that all the new growth is off the ground. Feed twice during the growing season with a potassium-rich fertiliser like 3:1:5, and steer clear of a nitrogen-rich feed as this produces leaves at the expense of flowers.

Watch out for mildew once the rains arrive. Spray infected plants with a copper-based fungicide or a very diluted solution of bicarbonate of soda (1 gram to 100 litres of water). The hotter the season gets the more susceptible the plants become to viruses, but there is little that can be done about it.

That is why it is best to sow early as possible for a longer fruit-bearing period. Aphids and thrips can damage the young fruit. Use an organic spray containing canola oil, which  mothers the insects. Grasshoppers and locusts are best removed by hand.

Baby marrows form quickly once the female flower has dropped. Remove the fruit by cutting it off the stem with a sharp knife or kitchen scissors. Don’t twist and pull it off as you could damage the stem.

If left on the stem the baby marrows can grow into a large marrow about 50cm long, which is how they are eaten in Europe and the Mediterranean. However, the larger the fruit load the less new fruit is produced. For an ongoing harvest it is best to pick when the fruit is about the length and thickness of a finger.

Baby marrows can be stored in a container or plastic bag in the refrigerator for a few days but not much longer as the quality deteriorates. They freeze well if cooked as part of a larger dish, such as ratatouille.

Baby marrow flowers are an absolute delicacy, especially if they are stuffed with ricotta, Brie or camembert cheese, dipped in batter and fried lightly.

Place the butter in a frying pan and add the onion. Cook on a low heat until the onion is soft. Add the zucchini and put a lid on the pan while cooking, stirring occasionally for about 10 minutes until soft. Add the garlic and ginger, and stir. In a bowl, crack the eggs and add salt and pepper, the grated cheese and the corn. Beat together. Add to the pan and simmer on a low heat. As the frittata starts setting towards the top, place under a hot grill to finish and set the top. Serve with tomato chilli jam.

A flavourful sauce that is great with any dish (if you like it hot!).
500g tomatoes
30g bird’s eye chillies
1 clove garlic
2 tablespoons balsamic vinegar
½ cup brown sugar
Splash of olive oil

Place the tomatoes, chillies and garlic in a food processor and blitz until well chopped. Heat a little olive oil in a pan and then add the tomato mix. Stir for a few minutes and then add the balsamic vinegar and sugar. Cook and stir until the liquid has almost gone and the sauce is jammy. Pour into sterilised jars, cool and refrigerate until ready to use.