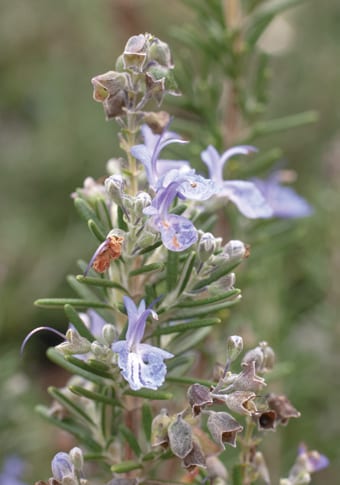 Rosemary imparts a delicious flavour and aroma to food. It is a healing herb for the body and soul, a beauty herb for hair and a fragrant air freshener for the home. In the garden it is a versatile plant that can be clipped into a neat hedge, shaped for topiary, grown in containers, or left to ramble abundantly in the garden.

All rosemary varieties do best in full sun and in soil that drains well. The preference is for rather poor chalky or stony soil but rosemary is surprisingly tolerant of most soil types. If your garden’s soil is too heavy, rather grow rosemary in a large pot or window box. As the ‘dew of the sea’ name suggests, rosemary is a good choice for coastal gardens, not minding the salty air and free-draining sandy soil. This evergreen herb can be grown in really cold areas but should be placed in a position that is sheltered from frost. It would need to be trimmed after it flowers in spring. As a slow grower it needs to be planted where it has room to grow. However, it can also be grown and clipped into a neat hedge. Rosemary is a good companion plant for beans, carrots, and cabbages – its aromatic property repels aphids and discourage snails, slugs, caterpillars and cutworms.

Old favourites Rosemary ‘McConnell’s Blue’ is the most widely grown rosemary. It bears small blue flowers in summer and grows slowly but surely into a large bush. Prune and shape it regularly if you want a smaller, more compact shrub. Rosemary ‘Tuscan Blue’, with it’s distinctive blue flowers, is also called braai rosemary because its long straight stems can be used as sosatie or kebab sticks, imparting a delicious flavour to the meat.

For more information about Rosemary and other herbs, veggies and fruits, read the summer edition of Grow To Eat. Click below to get yours now!