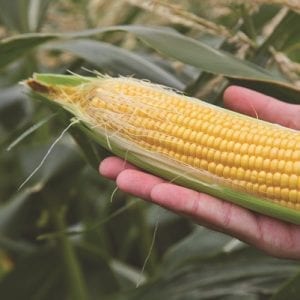 The sweetest sweetcorn ever

It’s at its sweetest fresh off the cob before the sugars start converting, so it’s always best to grow your own!

The idea of corn on the cob smothered in melting butter is a mouth-watering prospect. For home gardeners, sweetcorn is the domestic counterpart of field maize, and it’s an easy, undemanding crop to grow. It may be a South African staple, but like chillies, tomatoes and potatoes maize is a precious gift to us from the Americas, cultivated by the Aztecs of Mexico long, long ago.

Because this tall-growing plant is wind pollinated, never plant it in a single row where wind blowing from one side or another could blow the pollen away without it ever making contact with the tassels. Cobs that weren’t pollinated will be missing half their kernels. Always plant corn in blocks of 2-3 rows, running north to south. Ideal spacing is 35-45cm between plants and 60-75cm between rows.

Sow in situ, and plant two seeds together in each hole. Thin out the weaker plant later. Soil should be enriched with compost and raked level, and sticks and stones should be removed. Watch out for cutworm – put down bait or surround newly germinated plants with a cardboard collar (toilet roll) pushed a few centimetres into the soil.

Each plant produces 1-2 cobs and these are ready for picking 10-12 weeks after sowing. Harvest when the cobs are plump and well-filled. Test for readiness by piercing a kernel – if it is still milky it is ready for eating. The tassels should also be dry and withered. Try to cook it within 30 minutes of harvesting, before the sugars start converting to starch.