Home » Grow to eat » The Mystery of Mushrooms 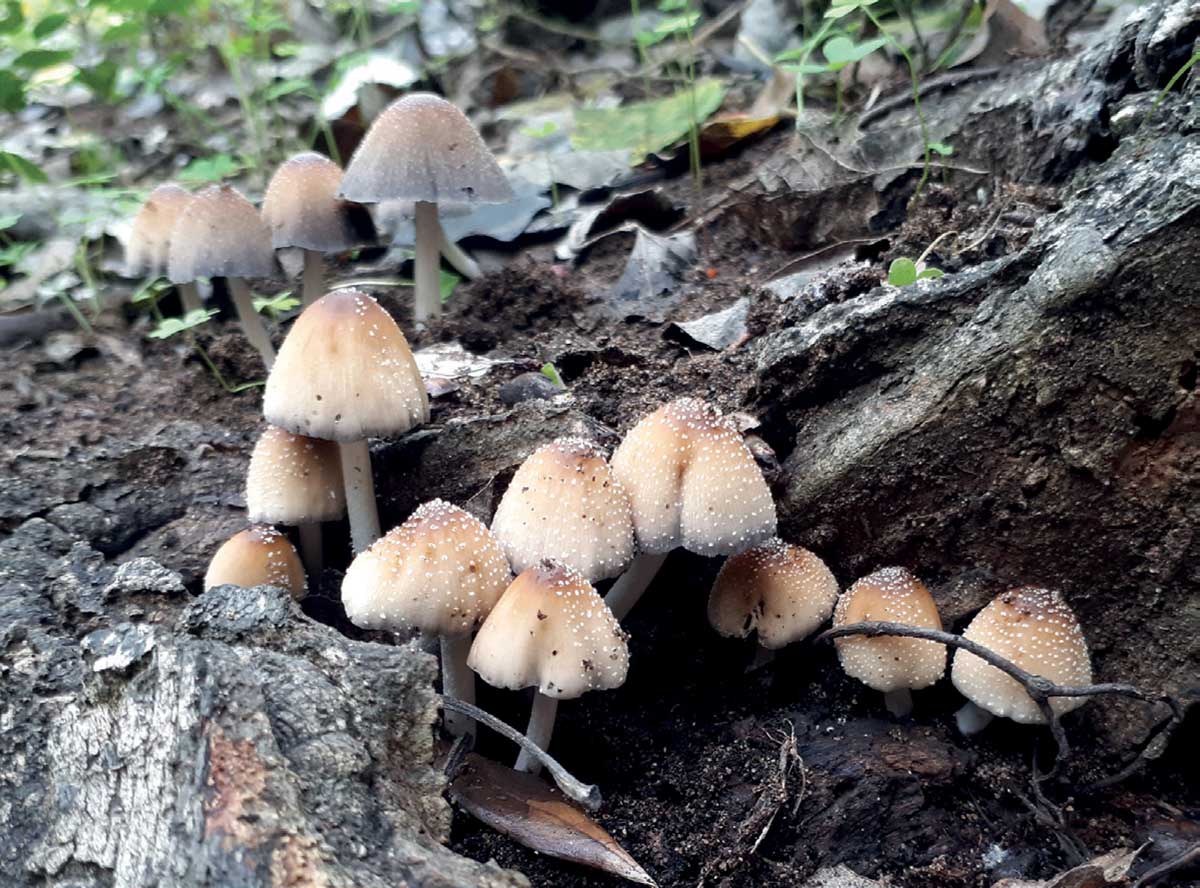 The Mystery of Mushrooms

Getting to grips with the many faces of the mushroom family.

As passionate gardeners, we are occasionally startled and surprised to find that some form of mushroom has popped up overnight on our lawn, appeared in the flower bed or is lurking in some shady spot in our garden. Some of us disregard these fascinating little wonders of nature, others approach them with fear, suspicion and superstition, yet the most commonly question asked when people notice them is: are these mushrooms edible? But what are these strange, fascinating and sometimes striking life forms?

Mushrooms are simply the visible, fleshy, spore-bearing fruit of a fungus. These organisms are neither plant nor animal, but belong to the fungal kingdom, which also include moulds, yeasts, rusts, smuts and mildews. Mushrooms appear in many shapes and forms, from the typical toadstool to brackets found on logs to the alien-like stinkhorns. A mushroom is a small representation of the rest of the organism growing underground, like the tip of the iceberg. The rest of the fungus consists of a network of microscopically thin threads that spread through the soil or substrate in search of foodstuff.

When conditions are favourable, a fungus will form a mushroom over a period of days. The purpose of the mushroom itself is to spread its spores, which are the microscopic seeds of a fungus. The mushrooms will advance to a desired level, slowly open the cap, and once the spores located on the gills/lamellae are ripe, they will start to drop and be carried away in air currents spreading the fungus to new prospective habitats.

What is the purpose of mushrooms in my garden?

Fungi play a vital part in the balance of ecosystems. They are the decomposers and recyclers of nature, breaking down organic matter for other organisms to feed on. Fungi that feed on dead organic matter are called saprophytes. If it weren’t for saprophytes, most of the earth would be filled with a whole variety of dead organic matter. Most commercially cultivated mushrooms are saprophytic. Button or brown mushrooms (Agaricus bisporus), for instance, are cultivated on straw, and some of the more exotic species prefer a wood-based substrate. A large group of fungi form a symbiotic relationship with plants and trees known as mycorrhizae. The root system of a plant is colonised by the fungus, providing increased moisture and nutrient absorption while the plant provides the fungus with carbohydrates formed from photosynthesis. In contrast, we also find parasitic fungi. Parasitic fungi feed on living organisms and may damage or kill the host in time if the parasite is not treated or removed.

Why do mushrooms seem to appear overnight, and what caused them to develop?

Mushrooms require moisture and high humidity to form – a mushroom consists of between 70 and 95% moisture. Since mushrooms have no skin or protective layer, moisture can easily be lost in dry conditions causing the fruit body to abort or wither away. This is why you will often notice a variety of mushrooms appearing after a good spell of rain, or in the rainy season in general. In reality, all mushrooms develop over a period of several days. Primordial fruit bodies are often tucked away under vegetation or mulch as they develop, mostly revealing themselves at a mature stage.

What are the most common mushrooms found in the garden?

The most notable mushrooms are those that appear on our lawn. At first glance they all seem alike, until you take a closer look. Some have yellow stems, others have brownish caps, and some are just plain dull in appearance. There’s not much to help the untrained eye to distinguish one species from another.

Is it safe to touch a mushroom or should I wear gloves?

All mushrooms are safe to touch and smell, and you can even nibble a small part of an unknown mushroom, but ALWAYS spit it out after a few seconds. Some mushrooms, such as stinkhorns, may cause your hands to smell unpleasant after you handling them.

How do you tell edible and toxic mushrooms apart?

There are no rules of thumb, tricks or hacks that indicate the edibility of a mushroom. The sure-fire way is to become familiar and learn to identify the poisonous, choice edible and lookalike mushrooms, and how to tell them apart from one another.

How do you tell one mushroom from another?

To identify a mushroom you should note all the characteristics of the specimen at hand. Note the colours, colour changes, shapes, smell, and all other features of the cap and gills to the base of the stem. Then compare your discovery to mushrooms described in a field guide, preferably a local field guide.

Can someone help me to identify this mushroom?

In a world dominated by social media, access to information is a click away. Join a local mushroom identification group on Facebook. The largest local group, Mushrooms of Southern Africa, is 7000 members strong with plenty of identifiers, both local and international.

Fungi and science to the rescue

Some new products on the market make use of beneficial fungi that occur naturally in soil to reduce the life cycle of certain pests, like red spider mite, whitefly and false codling moth. By mixing these living organisms with water and spraying your crops, you start a colony of the fungus, which will germinate and grow, in the process producing fungal toxins that eliminate pests. Other products use fungi to give the roots of a plant a boost, which acts as a vaccination for plants and helps them fight off diseases. For more on these products visit www.ecobuz.co.za.

Tips for sharing mushrooms on an identification page:

Andrew has been intrigued by mushrooms since an early age. An obsession with finding, identifying and growing mushrooms started with the gift of a mushroom field guide, and has grown into a collection of books, field guides and articles. Mushrooms have since become a pastime that has led him down many interesting roads, literally and figuratively. He says, “These fascinating organisms never cease to amuse and intrigue those who seek and study them”.