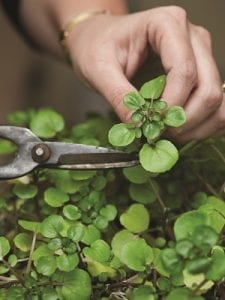 The wonders of watercress.

Watercress (Nasturtium officinale) is a creeping perennial that is one of the oldest leafy vegetables to be eaten by humankind. It is an aquatic or semiaquatic member of the Brassicaceae family and originates in Europe and Asia. Despite its name, it is not related to the nasturtium. The hollow stems and small dark green leaves are juicy, with a mustard tang, and it bears clusters of white flowers in summer.

Where does watercress grow best?

• In semi-shade, during summer.
• In fertile soil. Ordinary garden soil can be improved by adding compost and wellrotted manure. Dig it into the soil to a depth of 25 cm.
• In consistently moist soil.
• Hydroponically, in slightly alkaline water.

True to its name, it likes to be well-watered and will even grow in water. It grows quickly and should be picked frequently. Left on its own, it will grow 50 cm (and even up to 1 m) high, which defeats the purpose of planting it. Don’t let it flower because the leaves become bitter. It can also be grown as a sprouting vegetable. The young, edible tips are harvested days after germination. Watch out for slugs and snails.

Although watercress is classified as a perennial, in practice it is only at its best for three to four months of the year and should then be replaced. The season can be
extended by feeding it regularly with a liquid fertiliser, providing abundant water and removing the flowers as soon as they appear.

Mint also likes moist soil but it is too invasive to plant with watercress.

Use sharp scissors to snip off the sprigs as you need them. Leave a short stem with several eyes so that it can regrow. Watercress doesn’t have a long shelf life; it is best eaten as soon as possible after picking. However, leaves can be stored in a sealed plastic bag for two or three days in the refrigerator. They don’t dry well.

Not just a garnish.

Being related to mustard, garden cress and radishes, its leaves also have a strong, peppery flavour. It is eaten as a salad herb and is delicious in sandwiches. It can be wilted into pasta, and complements chicken, smoked salmon, mackerel, trout and tuna in a variety of dishes. You can also use it to make a pesto in the traditional way, simply by substituting the basil leaves for watercress. In winter there is the classic watercress soup. An excellent source of recipes is http://watercress.co.uk.

The ancient Greeks valued watercress as a food and medicinal plant. They ate it to build up strength and it was believed to remedy disorders of the brain. In folk medicine it was used as a blood cleanser and as a spring tonic.

Health – What we know now!

Watercress is an excellent source of vitamin C , vitamin A and beta carotene, as well as folic acid, calcium, iodine and iron. Being a powerful diuretic, it is also a good detoxifying herb. Watercress is known to stimulate the appetite and aid digestion. It can also help in cases of chronic bronchitis because it acts as an expectorant. A 2010 study conducted by the University of Southampton found that consumption of watercress may also inhibit the growth of breast cancer.

Don’t let water from a dripping tap go to waste. Plant three watercress plants in a pot and place it under the tap. Most taps are in semi-shade which is also ideal for the watercress. Plant them in a quality potting soil, and mix in an organic, nitrogen-rich fertiliser. Pick the leaves regularly to keep the plants compact and drench them with a liquid feed once a week, because watercress is a gross feeder. Into recycling? Use old gutters as an ingenious planter for watercress. Mount the gutters on a wall that receives partial sun. Place the gutters at a slight angle (for drainage) and stop up the lower end, making sure that there are holes at this end for drainage. Fill them with fertile potting mix, and space the plants about 15 cm apart. Water daily and feed weekly. Cut the leaves regularly to keep the plants compact.