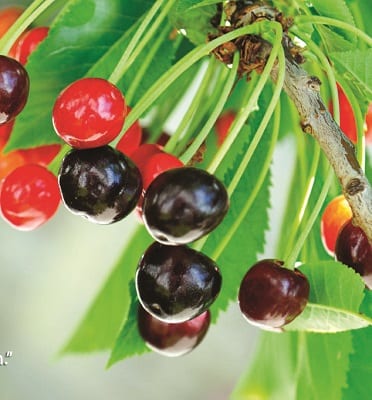 Cherries in South Africa
The first cherry trees that were successful fruit producers in South Africa were planted in 1905 on the farm Platkop in the Clocolan district. Five hectares were planted with varieties like Giant Heidelfinger, Bing, Early River and Early Red. Some of these original cherry trees can still be seen on the farm today and these cultivars are still grown in the area. It is estimated that there are 500 hectares of cherry trees in the Eastern Free State, concentrated mainly in the Ficksburg, Clocolan and Fouriesburg area. Approximately 250 trees can be grown per hectare, and the average yield per hectare is 10 tons.

The Cherry Festival
The Cherry Festival in Ficksburg, in the heart of the eastern Free State, is considered to be the oldest crop festival in South Africa, and has been held annually during the third week in November since 1967. It was launched by the local Jaycees with a street parade through town, a Cherry Ball and the crowning of a Cherry Queen. It was low key in the beginning but has become one of the major events on the South African calendar. More than 24 000 people visit the town during the cherry season to participate in the festivities (and partake of the juicy fruit).

Growing cherries
Suitable climates
Cherry trees are very particular about the climate and so can only be grown in certain regions of the country. They don’t like hot summers, they need chilling in winter and they have a real problem with frost. The climates of the eastern Free State and the Ceres area of the Western Cape suit them perfectly, and this is where they are grown commercially. On the Highveld the sunny winters can cause sunburn, which makes the trees susceptible to bacterial canker. To prevent this choose a site with afternoon shade, created by a wall or larger trees. If this is not possible, construct 1.5-metre high tripod structures, cover them with 50% shade net and place one on the northwest side of each tree. The structures can initially be close to each tree, and moved further away as branching begins.

Propagation
Purchase a cherry tree from a nursery on good rootstock like Gisela 5. It is possible to grow cherries by seed, but this is not recommended.

Pollination
Sweet cherries need cross-pollination, so mix varieties when purchasing – as a general rule have a pollinator to every second to fifth tree. The wilder varieties of sour cherries (PRUNUS cerasus) are self fertile.

Growing requirements
Choose a site with well-draining soil – cherry trees do not tolerate wet feet. Prepare the soil by digging big holes at least 0.5 x 0.5 m square. Loosen the bottom and sides of hole with a fork and mix soil from the hole with an equal amount of compost. Add bone meal or superphosphate and potassium. Do not apply any nitrogen. Space the holes for multiple trees at least 3 to 5 m away from each other. Plant the tree with about 10 cm of rootstock above the soil level. Water well, and cover with loose soil, and add a layer of grass, compost or any plant material around the hole as mulch. During the winter moisture is retained well in the soil – just make sure it is moist. In spring and summer, water according to rainfall patterns, as you would the rest of your garden. With the use of manure, it is not necessary to fertilise at all. Manure, as a dressing around the hole applied only in the summer months, will ensure sufficient nutrient supply. Use a stake to support young trees. Make sure the stake is not up against the tree and tie with a loose stocking or stretch tape, so as not to ring-bark the stem. During the growing season, select 2 to 3 leader branches that will grow upwards and remove all lower branches. In the second year, lateral branches will develop on the leaders. Ensure these do not become stronger than the leaders by cutting them back in the summer when they look threatening. Only control ones that become strong. Usually a cluster of branches develops at the tips of the leaders. These must be cut back, leaving only the strongest single upright branch. The lateral branches on the leaders will in time develop spurs, which bear the fruit.

Hail and birds
Severe spring hailstorms can strip leaves and fruit from trees so it is best to protect the trees. As the trees start to fruit, cover the trees in netting or build a square frame around the tree and stretch very fine netting around the sides and over the top of the tree. The fine netting will stop birds getting caught and save your harvest from them as well. If the trees are very large, use bird scarers on the trees to protect the cherries.

Pests and diseases
Cherry trees are fairly tough and have few problems. Copper oxychloride can be sprayed on the entire tree during the dormant season as a preventive measure against bacterial canker. Do not spray it on green leaves, only on dormant trees. Depending on your area, specific pests can occur and need to be controlled with specific chemicals.

Harvesting
Different varieties will ripen at different times. The more common Bing variety will ripen in mid November. The fruit should be picked as it becomes ripe, and eaten fresh or baked in cherry tarts and pies. Fresh cherries will store well for a number of days in a cool place.

Glazed Cherries: All the glazed cherries produced in South Africa come from Ficksburg. The process of making glazed cherries is an interesting one. They are traditionally produced using yellow cherries, which, if they start turning red, have to be bleached or they will have blemishes when glazed. The glazing process, although simple, takes time. The cherries are first stored in plastic drums in a solution of water, sodium metabisulphite, salt and chlorine for a minimum of six weeks (cherries can be stored like this for up to five years). The cherries are then hand sorted, graded into various sizes and mechanically de-stoned. Next, they are put in a double-walled pot and kept at a temperature of 90°C for five days to cook out the sodium metabisulphite. After the fifth day the temperature is reduced to 50°C for fourteen days. Following that colorants and sugars are added and then they are cooled, after which they are ready for packing. This process gives glazed cherries an indefinite shelf life.
For a delicious treat, try this cherry tart recipe!