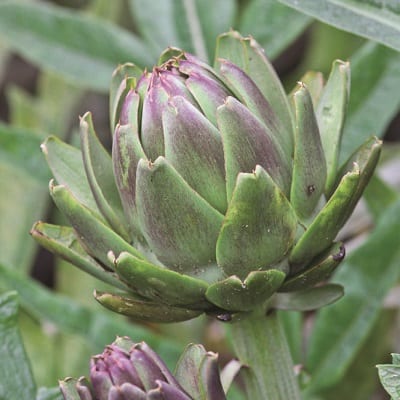 As a vegetable, globe artichokes (Cynara scolymus) are considered a gourmet delicacy. As a garden plant, the spiky silvery green foliage is striking and unusually beautiful. But as a herb or vegetable, would you guess that it is one of the most effective and far-reaching natural liver tonics that one can grow? The most effective part of the plant is its leaves, which are bitter and contain cynarin, which protects the liver against infections and stimulates its detoxifying action against toxins, like alcohol. A simple age-old Mediterranean recipe uses fresh artichoke leaf juice combined with water as a liver tonic.

Using the leaves medicinally
For medicinal uses, artichoke leaves should be picked before the plant flowers. The leaves can be dried or used fresh as an infusion or juiced. A tincture of the leaves (with vodka as the preservative) provides a concentrated preparation with a longer shelf life. The dosage for dried leaves is 5g a day, and for a tincture 5ml three times a day.

Growing artichokes
Artichokes are short-lived perennials that should be replaced after three years. The second and third years are their most productive. To grow into their full size they need plenty of space, as each plant grows up to 1,8m high and almost as wide. The effect is magnificent, whether in the flower, herb or veggie garden. They grow best in full sun, in well-composted soil that drains well, and don’t like heavy, clay soil. Each planting ‘station’ should be dug over to a depth of 25cm, compost mixed in and formed like a shallow dish. For an immediate start, and the most successful way to grow artichokes, young plants can be obtained from herb stands. Once established, plants need very little attention, just regular deep watering, mulch, weeding and the removal of dead leaves. Work compost into the soil once a year and feed with a balanced fertiliser in spring. Fertilise about 15cm away from the centre of the plant. Plants will tolerate frost but not where temperatures are consistently below zero in winter.

Harvesting
For medicinal uses, artichoke leaves should be picked before the plant flowers. The leaves can be dried or used fresh as an infusion or juiced. A tincture of the leaves (with vodka as the preservative) provides a concentrated preparation with a longer shelf life. The dosage for dried leaves is 5g a day, and for a tincture 5ml three times a day.

Share nature’s bounty:
Why not allow one of your artichokes to flower. They will be inedible but bees love the magnificent peacock-blue thistle flower heads. Watch out for black aphids in summer, which congregate on the underside of the leaves. Use an organic insecticide or plant tansy and pyrethrum as companions to keep the bugs away.

Preparing an artichoke
1. Remove the bottom leaves near the stem.
2. Cut off about a third of the top leaves with a sharp knife.
3. Cut the spines off each leaf using kitchen scissors.
4. Cut off the outer layer of the stem using a paring knife or a peeler, and trim the stem.
5. Rinse the artichoke in cold running water to get rid of any dirt trapped between the leaves.
6. Rub all cut surfaces with lemon juice to prevent them from going brown.

Cooking artichokes
Steam the artichokes for 20 – 45 minutes, depending on the size. Test every so often to see if they are soft. They are ready when you can easily pull off a leaf. Serve with a dipping sauce like aïoli, hollandaise sauce or vinaigrette.

Eating artichokes
There might some confusion as to what part of the artichoke to eat when you first tackle one. Peel away a leaf, dip the bottom of the leaf into your dipping sauce, then pull this part away with your teeth. Discard the rest of the leaf. When you have finished with all the leaves, discard the choke in the centre.

Preparing the heart
To get to the soft heart of the artichoke, first remove all the hard outer leaves. When you get to the softer middle leaves, twist them off with your fingers. The choke is the fibrous inside that comes from the thistle blooms and it is not great to eat. Take a spoon and remove the choke. What is left behind is the heart. Brush it with lemon juice and it is ready for cooking.